The History of the National Mall

On January 24, 1791, President George Washington announced the Congressionally designated, permanent location of the national capital – a diamond-shaped, ten-mile tract at the confluence of the Potomac and Eastern Branch Rivers. Andrew Ellicott and Benjamin Banneker undertook a preliminary survey of the area. Architect Pierre L’Enfant, a friend of President Washington, was appointed to design the project. He envisioned the Mall as the foremost boulevard of the city, the so-called "Grand Avenue." You can explore the Mall’s many features and a timeline of its development through an interactive map on the Campaign for the National Mall website.

After surveying the entire District site, L'Enfant came up with a complex plan that included a system of intersecting diagonal avenues superimposed over a grid system with the avenues radiating out from what were to be houses for Congress and the President.

L'Enfant specified in his notes that he meant the avenues to be wide and lined with trees. He also wanted them to visually connect with other sites throughout the city where important structures, monuments and fountains were to be built. 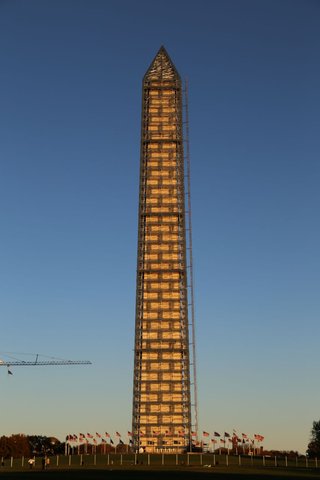 Washington Monument In his early written plans, L'Enfant shaded and numbered 15 large open spaces at the intersections of these avenues and indicated that they would be divided among the states. He specified that each open space would feature statues and memorials to honor worthy citizens.

As the National Park Service notes on its website, "In the context of the United States, a plan as grand as the 200-year-old city of Washington, D.C., stands alone in its magnificence and scale. But as the capital of a new nation, its position and appearance had to surpass the social, economic and cultural balance of a mere city: it was intended as the model for American city planning and a symbol of governmental power to be seen by other nations. The remarkable aspect of Washington is that by definition of built-out blocks and unobstructed open space, the plan conceived by L'Enfant is little changed today."

The images and vistas of the National Mall in Washington, D.C. represent the American character and our democratic experience to the world more than almost any other image of our country. It is also the nation’s most visited national park, with greater annual attendance than famous destinations like the Grand Canyon or Yosemite National Parks.

For both tourists and residents, the National Mall will always be the central axis of the District of Columbia, just as it was designed to be by architect and engineer Pierre L'Enfant in 1791. A major non-profit initiative, the Trust For The National Mall, was founded in 2007 to restore, improve and maintain this national treasure.

Restoration of the Washington Monument

Perhaps the most central and prominent icon of the Mall is the Washington Monument, built in honor of George Washington and designed by Robert Mills. Shaped like an Egyptian obelisk, it stands 555 feet 5 1/8 inches tall, and offers views in excess of thirty miles. It was finished on December 6, 1884, and opened to the public in 1888.

On August 23, 2011, a 5.8 magnitude earthquake caused significant damage to the structure and forced its closure. To support its restoration, the monument was fully encased in scaffolding. It reopened to the public on May 12, 2014.

Photo: This map of The McMillan Plan: 1901 - The Mall can be seen on The National Mall wikipedia page.

Note: The National Mall is accessible to the public. A National Park Service Ranger Station is located on the Washington Monument grounds and is open from 9:00 a.m. until approximately 7:00 p.m. For more information on ranger programs and National Mall activities, call 202-426-6841. Metro stop: Smithsonian