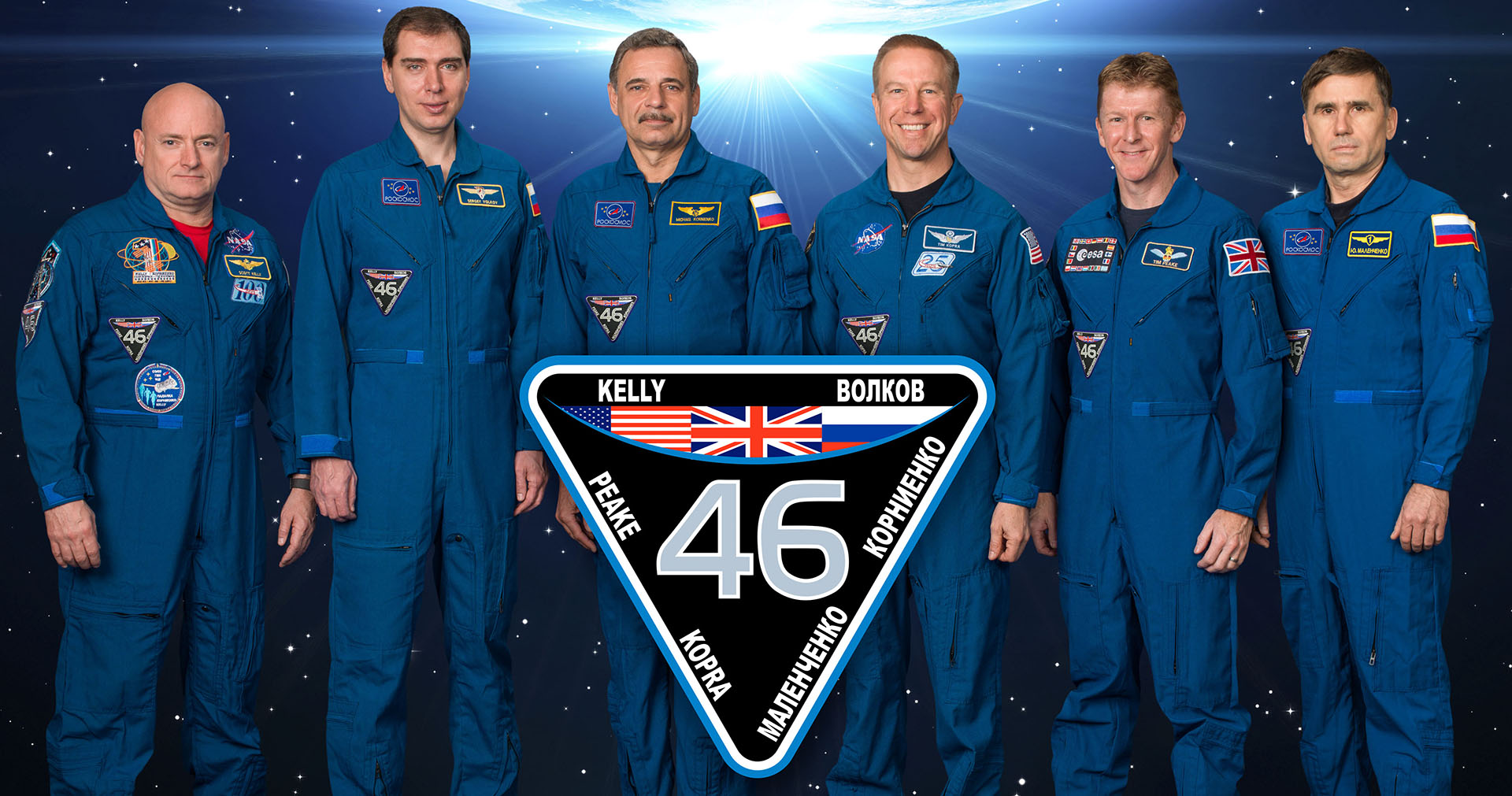 The mission of Expedition 46 crew members is to install equipment and conduct experiments that help researchers test the use of inflatable space habitats in microgravity, analyze microbes living on the space station and study the protein crystal growth enablement of structurebased drug design, an integral component in the drug discovery and development process.

The 46 icon in the foreground of the patch represents the forty-sixth expedition on the International Space Station. Earth is depicted at the top with the flags of the countries of origin of the crew members: the United States, Russia and the United Kingdom.

The Union flag of the UK is displayed in a position of prominence in recognition of the significance of the first British astronaut to fly in space. The outer border is in the shape of a triangle with an unbroken border, symbolizing the infinite journey of discovery for past, present and future space explorers. The names of the six Expedition 46 astronauts and cosmonauts are shown in the border.

Bigelow Expandable Activity Module
Future space habitats for low-Earth orbit, the moon, Mars, or other destinations need to be lightweight and relatively simple to construct. The Bigelow Expandable Activity Module (BEAM) is an experimental expandable capsule that attaches to the International Space Station (ISS). After installation, BEAM inflates to roughly 13 feet long and 10.5 feet in diameter to provide a habitable volume where a crew member can enter.

Expandable habitats, occasionally described as inflatable habitats, greatly decrease the amount of transport volume for future space missions. These “expandables” weigh less and take up less room on a rocket while allowing additional space for living and working. They also provide protection from solar and cosmic radiation, space debris, and other contaminants. Crews traveling to the moon, Mars, asteroids, or other destinations could use them as habitable structures.

Microbial Tracking Payload Series/Microbial Observatory-1
Along with crew members and experimental payloads, the space station is home to a variety of microbes, which could potentially threaten crew health and jeopardize equipment. The Microbial Payload Tracking Series project uses microbial analysis techniques to establish a census of the microorganisms living on space station surfaces and in its atmosphere. Crew members will sample the United States modules three times during one year, which enables researchers to conduct long-term, multigenerational studies of microbial population dynamics.

This analysis can help determine whether some microbes are more virulent in space, and which genetic changes might be involved in this response. This will provide a better understanding of microbe diversity onboard the station, as well as genetic strategies for identifying specific subsets. Results from this investigation can be used to evaluate cleaning strategies, and to mitigate microbe-related risks to crew health and spacecraft system performance.

CASIS Protein Crystal Growth 4 (CASIS PCG 4)
CASIS PCG 4 comprises two investigations that both leverage the microgravity environment in the growth of protein crystals and focus on structure-based design, an integral component in the drug discovery and development process. Scientists will attempt to grow co-crystals of a human membrane protein in the presence of a medically relevant compound in microgravity in order to determine its three-dimensional structure. This will enable scientists to chemically target and inhibit, with “designer” compounds, an important human biological pathway that has been shown to responsible for several types of cancer.