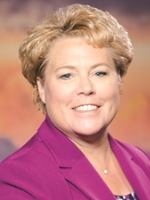 Molly Phillips is the Executive Director and General Manager for Iowa Public Television (IPTV), where she has been responsible for leading Iowa’s only statewide broadcasting network since 2013.  Molly has served IPTV since 1990, devoting her career to the advancement of public television and IPTV’s mission to educate, inform, enrich and inspire Iowans.  She was previously the Director of Communications and Community Engagement, where for nearly 15 years she was responsible for the network’s state and federal public policy advocacy.  America’s Public Television Stations (APTS) presented Molly with the National Advocacy Award in 2010.

Molly currently serves as Past-Chair on the National Educational Telecommunications Association (NETA) Board of Directors.  She previously served NETA as Chair and Secretary.  Molly also serves on the Affinity Group Coalition of public media organizations and is leading an initiative to create professional development training opportunities for public media employees. She served on the Community Service Grant (CSG) Review Committee in 2019. She completed the Public Broadcasting Service (PBS) Executive Leadership program in 2015. Molly also serves on the APTS Board of Trustees and is also an active member of the Organization of State Broadcasting Executives (OSBE).

Molly has made presentations at numerous public television meetings, including the 2019 NETA Conference, the 2018 and 2019 APTS Public Media Summits and the 2017 Corporation for Public Broadcasting (CPB) Board Meeting on the many educational benefits and opportunities provided by Iowa Public Television.

Molly holds a Bachelor of Arts degree in Business from Grand View University in Des Moines.  She was raised in Southwest Iowa and she currently resides in Grimes with her husband Steve. They have three grown children: Courtney, and twin boys Taylor and Trevor.

Molly is Vice Chair of the PBS Diversity Advisory Committee and serves on the Finance and Audit committees.