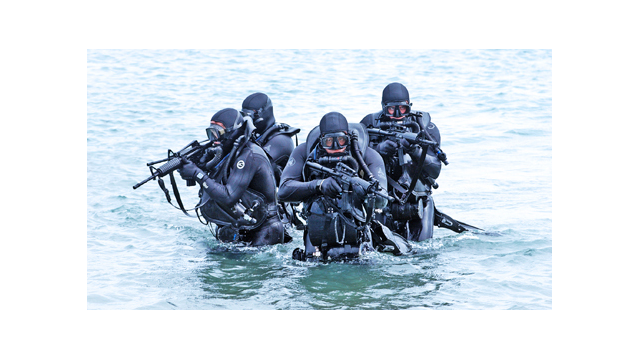 UPDATED: ARLINGTON, VA; OCTOBER 8, 2014 -- PBS will premiere a new documentary about the history of the Navy SEALs. Narrated by actor and humanitarian Gary Sinise, NAVY SEALS – THEIR UNTOLD STORY premieres on Veterans Day, Tuesday, November 11, 2014, 9:00-11:00 p.m. ET. Despite the widespread attention paid to the SEALs (Sea, Air and Land) since they eliminated Osama bin Laden, the story of how these clandestine commandoes evolved in response to changing threats — from WWII to the War on Terror — and how their extraordinary abilities shaped U.S. and world history, has remained untold. Few people know the unheralded tales of the first frogmen who dared to face almost certain death with little training, scant equipment and untested tactics.

“NAVY SEALS – THEIR UNTOLD STORY revisits the most riveting missions of each era, and PBS is pleased to tell the story of how the SEALs changed the nature of the Navy’s special operations,” says Bill Gardner, Vice President, Programming and Development, PBS. “As part of the PBS Stories of Service initiative, this film will provide a deeper understanding of our nation’s military history through the eyes of those who have served our country.”

The Navy’s first Special Warfare Units go back to World War II, and, without them, many of the chapters of that conflict — including the invasion of Normandy and in subsequent conflicts in Korea, Vietnam, Afghanistan and Iraq — might have been written with different outcomes.

NAVY SEALS – THEIR UNTOLD STORY recounts the ticking-clock missions of the “Commandoes of the Deep” through firsthand accounts — including that of a D-Day demolition team member — and through never-before-seen footage, home movies and personal mementoes. Admirals, master chiefs, clandestine operators, demolitioneers and snipers reveal how US Navy SEALs morphed into the world's most admired commandoes.

“We are told that this is the first time Naval Special Warfare has assisted with the research of a documentary about the teams and their forefathers,” says filmmaker Carol L. Fleisher. “We believe this is the first time a documentary has framed the history of the world through the lens of firsthand SEAL reports and missions – some of which have only recently been declassified."

For over thirty years, Gary Sinise has stood as an advocate of America’s servicemen and women. In 2011, to expand upon his individual efforts, Sinise established the Gary Sinise Foundation with the mission to serve our nation by honoring and supporting our active duty defenders, our wounded, our veterans, first responders, their families, and those in need.

PBS Distribution will release the DVD version of NAVY SEALS: THEIR UNTOLD STORY on January 6, 2015. The DVD will be available for a suggested retail price of $24.99. The running time is 120 minutes.

From New York Times bestselling authors Dick Couch (a retired SEAL) and William Doyle comes a new book entitled Navy SEALS: Their Untold Story, the first complete history of the U.S. Navy SEALs, starting with their roots in World War II to their celebrated efforts in the Global War on Terror. William Morrow, an imprint of HarperCollins Publishers, is releasing Navy SEALs s on November 11, 2014.

Corporate funding for NAVY SEALs – THEIR UNTOLD STORY is made possible by the United States Automobile Association (USAA) and Anheuser Busch, with additional funding from PBS and public television viewers.

NAVY SEALs – THEIR UNTOLD STORY is produced by fleisherfilm in association with Oregon Public Broadcasting.

About fleisherfilm
fleisherfilm is an award-winning documentary production company that prides itself in making films that excite, inspire and inform. Our programs have won Emmys, the Writers Guild of America Award, Genesis Awards, Humanitas Prizes, Golden Hugo, Cable Aces, Cine Golden Eagles, among many others. Established in 1991, we produce documentaries only — finding that life provides the most interesting stories of all.

About OPB
OPB is the largest cultural and education institution in Oregon and southern Washington, delivering excellence in public broadcasting to 1.5 million people each week through television, radio and the Internet. Widely recognized as a national leader in the public broadcasting arena, OPB is a major contributor to the program schedule that serves the entire country. OPB is one of the most-used and most-supported public broadcasting services in the country and is generously supported by its members.

About PBS Stories of Service
As America’s storyteller, PBS is bringing together multi-platform content and powerful conversations around U.S. military veterans under the banner of Stories of Service. The national programming content features compelling stories of those who have served and provides a deeper understanding of our nation’s military history. Through public television on air and on PBS.org, PBS member stations will create their own local content and provide community resources for returning veterans and their families. The initiative will educate the civilian population about our military history and highlight the contributions from the veteran community. The Stories of Service initiative was announced in May 2014 along with a community engagement campaign for select PBS member stations and their local veterans and funded by the Corporation for Public Broadcasting (CPB), called Veterans Coming Home. The PBS programing under Stories of Service, many with funding support from CPB, includes: in 2014 - COMING BACK WITH WES MOORE (May 13); NATIONAL MEMORIAL DAY CONCERT (May 25); DEATH AND THE CIVIL WAR: AMERICAN EXPERIENCE (May 26); D-DAY 360 (May 27); NOVA “D-Day’s Sunken Secrets” (May 28); MAKERS “Women in War” (October 21); CRAFT IN AMERICA “Service” (November 2); TBA musical tribute to the troops (November 7); ICE WARRIORS: USA SLED HOCKEY (November 10); in 2015 - LAST DAYS IN VIETNAM: AMERICAN EXPERIENCE (Winter/Spring 2015); HOMEFRONT (Winter/Spring 2015); LA BATALLA (2015); and in 2016 - Ken Burns and Lynn Novick’s VIETNAM (w.t.).