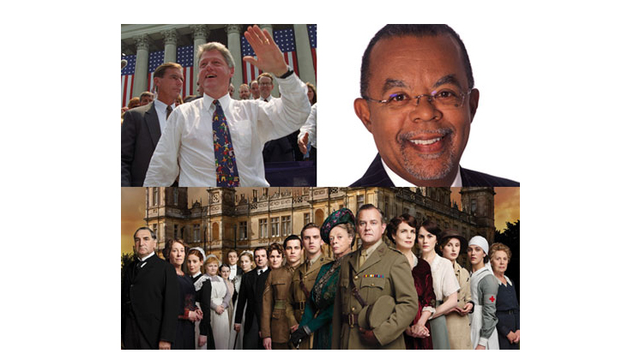 ARLINGTON, VA; NOV 16, 2011 – In advance of PBS presentations at the TCA (Television Critics’ Association) Press Tour, PBS announced today highlights of its broadcast schedule for winter/spring 2012, including two just announced miniseries: CLINTON, a profile of the 42nd president, from AMERICAN EXPERIENCE and FINDING YOUR ROOTS WITH HENRY LOUIS GATES, JR., an exploration of the backgrounds of famous Americans.

Headlining the broadcast schedule on January 8 at 9:00 p.m. and continuing for seven weeks is the eagerly awaited return of MASTERPIECE CLASSIC’s “Downton Abbey, Season 2.” The miniseries opens as World War I changes lives, tests alliances and brings new drama to Downton. See a new preview, released today on pbs.org.

From MASTERPIECE MYSTERY!, premiering at 9:00 p.m. May 6 and continuing through May 20, Sherlock Holmes stalks again in the three-part “Sherlock, Series 2.”This modern version, set in 21st-century London, stars Benedict Cumberbatch (War Horse) as the go-to consulting detective and Martin Freeman (The Hobbit) as his loyal friend, Dr. John Watson.

Also, just being announced today is FINDING YOUR ROOTS WITH HENRY LOUIS GATES, JR., with the renowned cultural critic and Harvard scholar who also will be in attendance at the TCA/PBS Press Tour.  Premiering Sunday, March 25 at 8:00 p.m., the 10-part series delves into the genealogy and genetics of famous Americans, combining history and science in a fascinating exploration of race, family, and identity in today's America.  Professor Gates shakes loose captivating stories and surprises in the family trees of Kevin Bacon, Robert Downey, Jr., Branford Marsalis, John Legend, Martha Stewart, Barbara Walters and Rick Warren, among many others.

Premiering April 11 at 10:00 p.m., AMERICA REVEALED takes viewers on a four-hour journey high above the American landscape to reveal the country as it’s never been seen before. With technology expert and communications attorney Yul Kwon (“Survivor: Cook Islands”) serving as host, this exciting new PBS series travels through time, space and systems to reveal a nation of interdependent and intricately interwoven networks that feed and power the nation, produce millions of goods and products, transport people great distances and come together to make America work.

“Building on an exceptional fall season, we’re excited to announce a winter/spring schedule packed with an incredibly diverse line-up of programming,” said PBS President Paula A. Kerger. “This season, we continue our focus on the arts with a fresh slate of dynamic performances from legendary artists. We also are going to take an extraordinary look at America through profiles of influential figures, and fresh perspectives on our infrastructure, industry and nature. And I know I’m not the only one who’s excited about the return of favorites such as Sherlock Holmes and the Emmy Award-winning Downton Abbey. We look forward to featuring many of these shows at PBS’ portion of the TCA press tour.”

Also appearing are Henry Louis Gates, Jr., for his new miniseries FINDING YOUR ROOTS; Anna Deavere Smith for GREAT PERFORMANCES “Let Me Down Easy”; and David Pogue for NOVA “Hunting the Elements.” Additional talent will be announced soon.

“The PBS winter/spring season offers an exceptional array of programming choices, scheduled more thematically to help viewers more easily connect with the topics they’re passionate about,” said John, F. Wilson, Senior Vice President & Chief TV Programming Executive. “Not only will viewers find shows more conveniently on our broadcast schedule, PBS regularly makes key programs available the next day after broadcast in streaming video on pbs.org and on many of our mobile platforms.”

After the move of NOVA to Wednesday nights in January 2010, year-over-year ratings show that Wednesdays at 9:00 p.m. have benefitted from the move, across all demographics, with ratings among viewers aged 40-49 up 31 percent. Overall, NOVA’s 2010-2011 season ratings are up 25 percent from the '09-10 season. This winter/spring, PBS continues to pair NATURE and NOVA on Wednesday nights — and solidifies the night by adding more science and natural history programming in the 10:00 p.m. slot.

NATURE, maintaining its 8:00 p.m. slot, investigates a marsupial invasion in “Kangaroo Mob” on January 11, and in “Raccoon Nation,” on February 8, considers how human beings, in an effort to outwit raccoons, may be actually making them smarter and contributing to their evolutionary success. A two-part NOVA special, “Hunting the Elements,” premieres in April, asking the question, “What are things made of?” David Pogue (“Making Stuff”) spins viewers through the world of weird, extreme chemistry on a quest to unlock the secrets of the elements.

As part of the strategy of building a science and nature destination night on Wednesdays, PBS adds to the 10 p.m. slot the new multi-part science series INSIDE NATURE’S GIANTS, beginning Wednesday, January 18 at 10:00 p.m. Bringing together a SWAT team of scientists — including a comparative anatomist, a veterinary scientist and an evolutionary biologist — the series goes inside (literally) to reveal the secrets and anatomical mysteries of some of nature’s largest animals, including a sperm whale, large pythons, a great white shark, and a lion and a tiger.

In additional schedule moves, PBS is focusing even more thematic programming with back-to-back plays of ANTIQUES ROADSHOW, plus biographies and history specials on Mondays; and more history, including thematically linked shows from AMERICAN EXPERIENCE, on Tuesdays, along with FRONTLINE investigations; and independent film and an additional FRONTLINE play on Thursdays.

Beginning in January, AMERICAN EXPERIENCE premieres a slate of new and encore episodes centered on the American West on Tuesday nights, including the premieres of BILLY THE KID on January 10 and CUSTER’S LAST STAND on January 17, airing at 8:00 p.m.

INDEPENDENT LENS returns Thursday, January 12 at 9:00 p.m. with “Have You Heard From Johannesburg,” a five-part series chronicling the unprecedented international movement of citizen activists who fought to bring down the system of apartheid in South Africa.

Later in the spring, MASTERPIECE celebrates Charles Dickens with the MASTERPIECE/BBC co-production of the two-part “Great Expectations,” Sundays, April 1 and 8 at 9:00 p.m., starring Gillian Anderson, the Emmy-winning star of “Bleak House,” and Douglas Booth; and a production of  the Dickens classic “The Mystery of Edwin Drood,” Sunday, April 15 at 9:00 p.m.

The two-hour JOHNNY CARSON: AMERICAN MASTERS, airing Monday, May 14 at 9:00 p.m., offers an in-depth portrait of the undisputed king of late-night television. In exploring the career, complexities and contradictions of one of the biggest stars television has ever produced, AMERICAN MASTERS secured the Carson estate’s previously unavailable cooperation and permission —  unrestricted entrée into his personal archives and perhaps Carson’s greatest legacy, all episodes of “The Tonight Show” from 1970-1992. Clues about his life and stories about his childhood and early days in the business can be found there — and in the expansive family albums and memorabilia, as well. Original interviews with friends, colleagues, his wives and the many performers who appeared, or began, on “The Tonight Show” offer additional context: Carl Reiner, Mel Brooks, Jay Leno, David Letterman, Ellen DeGeneres, Jimmy Fallon, Jerry Seinfeld and Doc Severinsen, among many others.

NATURE“Cracking the Koala Code” airs Wednesday, May 16 at 8:00 p.m. and follows individual koalas from a small social group on an Australian island to reveal how a koala manages to survive and thrive on a diet poisonous to almost all other herbivorous mammals. Following at 9:00 p.m. is NOVA’s “Deadliest Tornado” (w.t.).

Information on additional program premieres, including PBS Black History Month Specials and Election 2012 programming, will be announced throughout December and at the PBS/TCA Press Tour, January 4 and 5, in Pasadena, California.