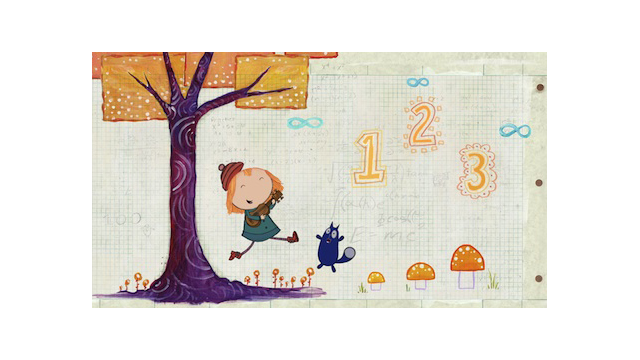 Television Critics Association Press Tour, Pasadena, CA, January 14, 2013 – This fall, PBS KIDS will premiere PEG + CAT, a new animated preschool series that follows the adorable, spirited Peg and her sidekick Cat as they embark on adventures and learn foundational math concepts and skills. Co-creators Billy Aronson (Rent, Postcards from Buster) and Jennifer Oxley (Little Bill, The Wonder Pets!) have teamed with The Fred Rogers Company to bring young viewers a new way to experience math through Peg and Cat’s relatable, and often hilarious, adventures. This multiplatform media property premieres this fall on PBS KIDS with a special one-hour broadcast of two back-to-back episodes, along with integrated online and mobile content. Each episode features fascinating stories in which Peg and Cat encounter a problem that requires them to use math and problem solving skills in order to move forward. The series will air daily following its premiere (check local listings).

Math understanding and skills are essential, yet national assessments show that 60 percent of students are performing below proficient levels in math by the 4th grade, and this learning gap is more pronounced in children from low-income families.* To help support math learning for young children, the National Research Council’s Committee on Early Childhood Mathematics has highlighted the need for “increased informal programming, curricular resources, software, and other media” to help build key math skills.**

“PBS KIDS is committed to using media to open up worlds of possibilities for all children, and developing content that focuses on math is a critical part of that,” said Lesli Rotenberg, General Manager, Children’s Programming, PBS. “We’re excited to launch PEG + CAT this fall, adding a math media property to our preschool line-up that includes popular series like The Cat in the Hat Knows a Lot About That!, which teaches natural science, and Curious George, which focuses on engineering. With its adventurous storylines and engaging characters and music, PEG + CAT will encourage kids to discover how to use math concepts, as well as core skills including cooperation, perseverance and resiliency, as they explore the world around them.”

The PEG + CAT television series is part of a multiplatform media experience that will also include interactive content online and on mobile. The series currently offers games and other resources online at pbskids.org/peg, and additional interactive features, including more games, parent resources and a mobile app, are slated to launch along with the on-air premiere in fall 2013.

Every half-hour episode of PEG + CAT will feature two stories, each an eleven-minute adventure in which Peg and Cat find themselves thrust into an unexpected math word problem. But it’s not just an abstract academic exercise for them — it’s a messy and funny quandary they have to solve. The show focuses not only on helping kids build math skills, such as how to add or subtract, but on how to think about larger math concepts as well — concepts that form the foundation for learning math at any level, from kindergarten to calculus. In each episode, Peg and Cat use foundational concepts like relative size, geometry and algebraic thinking to solve the problem and save the day. The series’ curriculum is based on Common Core State Standards.

Peg and Cat’s adventures take them through worlds of infinite possibilities — from farms to purple planets, from 16th-century Verona to New York’s Radio City Music Hall, from a land of pirates to a prehistoric valley — demonstrating that math is everywhere.

PEG + CAT stories are at once engaging, appealing, accessible and age-appropriate. As Peg solves a seemingly insurmountable problem, she has to think through what went wrong and how she can get back on track. Life skills such as cooperation are also important parts of the series, as Peg and her friends have to work together to solve problems; and since Peg might not get it right the first time, viewers also see value of learning from mistakes and  experimentation. Music is also used as a teaching tool throughout the math series; each episode features an original song.

“Creative partnerships are the key to great children’s television, and we fell in love with PEG + CATthe first time we saw it,” said Kevin Morrison, chief operating officer of The Fred Rogers Company. “This is a math series, and if you add up Jennifer’s beautiful visual style, Billy’s sense of humor, The Fred Rogers Company and PBS, the sum will be a hit.”

PEG + CAT is funded in part by the U.S. Department of Education through the Ready To Learn Initiative, a program that supports the development of innovative educational television and digital media targeted at preschool and early elementary school children and their families, and by the Corporation for Public Broadcasting (CPB).

“Parents, caregivers and teachers have long trusted public media to help children build critical math and literacy skills that will prepare them for success in school,” said Debra Sanchez, Senior Vice President of Education and Children’s Content Operations at CPB. “We are proud to partner with PBS KIDS through Ready To Learn to support PEG + CAT, which continues a long tradition of developing educational programming and content that gets preschoolers excited about learning.”

PEG + CAT is part of PBS KIDS’ ongoing commitment to helping kids build the skills they need to succeed in school and in life. PBS KIDS serves young audiences wherever they live, learn and play — through educational apps, on TV, online and in the classroom.

About The Fred Rogers CompanyThe company was founded by Fred Rogers in 1971 as the nonprofit producer of Mister Rogers’ Neighborhood for PBS. In the years that followed, it not only created hundreds of episodes of this much-loved program, but also extended Fred’s values and approach to other efforts in promoting children’s social, emotional and behavioral health and supporting parents, caregivers, teachers and other professionals in their work with children. The Fred Rogers Company continues to build on Fred’s legacy in innovative ways through a wide variety of media, and engaging new generations of children and families with his timeless wisdom. For more information, visit us at www.fredrogers.org.

About CPB  The Corporation for Public Broadcasting (CPB), a private, nonprofit corporation created by Congress in 1967, is the steward of the federal government's investment in public broadcasting. It helps support the operations of more than 1,300 locally-owned and -operated public television and radio stations nationwide, and is the largest single source of funding for research, technology, and program development for public radio, television and related online services.

About The Ready To Learn Initiative  The Ready To Learn Initiative is a cooperative agreement funded and managed by the U.S. Department of Education's Office of Innovation and Improvement. It supports the development of innovative educational television and digital media targeted at preschool and early elementary school children and their families. Its general goal is to promote early learning and school readiness, with a particular interest in reaching low-income children. In addition to creating television and other media products, the program supports activities intended to promote national distribution of the programming, effective educational uses of the programming, community-based outreach and research on educational effectiveness.