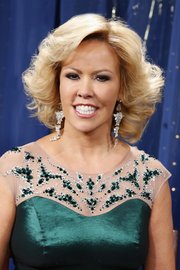 Co-Host Mary MurphyPhoto by Jeffrey DunnThe host of America's Ballroom Challenge is Mary Murphy, a former national ballroom dancing champion, a dancer on Broadway and the silver screen and, for the last decade, a judge on the popular TV series So You Think You Can Dance.

"I'm thrilled to be hosting America's Ballroom Challenge — shot in Ohio, just 30 miles from where I was born," Murphy says.  "I've seen a lot of spectacular dancing over the years. But what I witnessed in a few days in Columbus really opened my eyes. These couples today are just dazzling."

Born the only daughter among three brothers in an Irish family in Lancaster, Ohio, Murphy spent her youth competing in basketball, volleyball, track and field, and football. After graduating from Ohio University with a degree in physical education and a minor in modern dance, Murphy moved to Washington, D.C., where she answered a newspaper ad for dance instructor trainees at a local studio. That job took her to see the United States Ballroom Championships in New York City, where she realized she'd found her calling.

As Murphy's career as a dance teacher and competitor took off, she relocated to Southern California and opened a studio. She and her partner Manfred Stiglitz became the Austrian Standard and Latin 10-dance champions, danced in three world championships, and were ranked in the top 10 in the dance world. Later, with new partner Jim Desmond, Murphy won the U.S. national 9-dance championship, competing in the nine dances of the American Smooth and American Rhythm styles.

After retiring from competition, Murphy shifted her focus to co-organizing national dance events such as the Southwest Regional Dance Championship in San Diego, the Hollywood Dancesport Championship, and the Holiday Dance Classic in Las Vegas. Soon Hollywood came knocking. She was a finalist for a judging position on Dancing with the Stars but was snatched up by So You Think You Can Dance instead.  Murphy’s crowd-pleasing verve as a permanent judge on SYTYCD has made her a household name among dance aficionados around the world.

In addition to her work on So You Think You Can Dance, Murphy has appeared in such films as Dance With Me with Vanessa Williams and the thriller Killer Movie opposite Kaley Cuoco-Sweeting. Murphy has also coached such luminaries as Dennis Quaid, Mary Steenburgen and Donnie Wahlberg, was Julia Roberts' body double for a dancing sequence in Something to Talk About, and guest-starred in the Broadway hit Burn the Floor.

Beyond her career in show business, Murphy continues to be one of the hardest-working women in dance, serving as a judge at major ballroom competitions. She also coaches and mentors rising dancers at her San Diego studio, the Champion Ballroom Academy.

A survivor of thyroid cancer, which threatened her vocal cords, Mary is a dedicated supporter of the American Cancer Society. She founded Mary Murphy's Chance to Dance program, which encourages schools to offer dancing as a regular part of their curriculum, and, more recently, Soldiers Who Salsa: Healing Soldiers One Step at a Time.