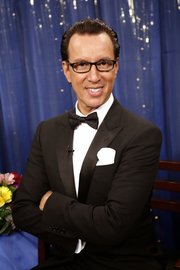 Meredith and his former partner, Melanie LaPatin, competed 13 times on the PBS program's predecessor, Championship Ballroom Dancing, and were three-time Latin Division Champions. Yet even he was impressed with the caliber of dancing shown by the professional couples at the 2014 Ohio Star Ball.

"Each year they seem to raise the bar. And it never gets old, even for an old-timer like me," Meredith says. "I still get a thrill every time I set foot inside a ballroom with such talented dancers."

Meredith is of Mexican and Samoan descent. He was born in San Diego, where his father was stationed while serving in the Navy, and grew up in California, Hawaii and American Samoa. Too young to get into nightclubs when he moved back to San Diego in 1978, he learned to dance south of the border in Tijuana, then answered an ad for a dance instructor at a studio run by perennial Latin dance champions Ron Montez and Liz Curtis. Montez would become his mentor.

Also in San Diego, Meredith met Melanie LaPatin. Their partnership would span more than 25 years and result in over 100 titles, including the DanceSport World Cup Championship and the U.S. Professional Latin Dance Championship.

Though Meredith is now retired from competition, dancing remains his passion. His mission is to share it with as many people as possible:

A citizen of the world, Meredith currently divides his time between San Diego, New York City, Columbus and Samoa.