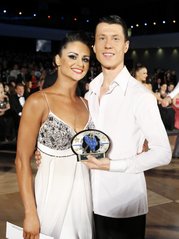 In a nail-biter, current national champions Peter and Alexandra Perzhu defeated Mikhail and Galina Zharinov to win the American Smooth competition and advance to the grand finale. The Perzhus placed first in the group rounds but slipped to third in the showdance, while the Zharinovs, who were right behind after the group rounds, narrowed the gap by winning the showdance. But the Perzhus hung on to win on the strength of their many first-place marks in the four dances of the group rounds. 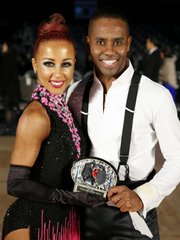 Emmanuel Pierre-Antoine and Liana Churilova dominated the American Rhythm competition, placing first in both the group dances and the showdance and beating out five other finalists to advance to the grand finale. 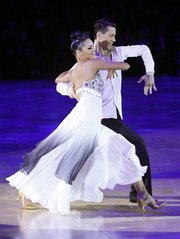 Peter and Alexandra (Sasha) both started dancing at age five in their native Kazakhstan. They've been dancing as a couple for eight years and married for six. Tall, elegant and dynamic on the dance floor, they have the look of champions – the current U.S. national and World Professional American Smooth Champions. Versatile as well as talented, they also compete in American Rhythm. In fact, they're the four-time U.S. 9-dance champions, competing in all nine dances in the American style. 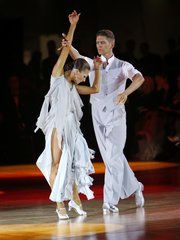 Nick and Victorija have only been dancing together since 2013, but both have many years of experience: Nick started dancing when he was six years old in Moscow, and Victorija began dancing at age seven in her native Latvia. They're risk-takers both on the dance floor and in life. Victorija trained in karate; Nick used to be a competitive high diver; and both of them drive motorcycles today. That sense of adventure comes out on the dance floor in routines marked by great passion and precision. 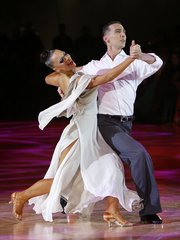 Mikhail and Galina were both born in Russia and began dancing at the age of five, but they met many years later at a dance studio in New York City. They've been dancing together for eight years and have been married for two. They dance with great speed and passion on the dance floor, but they feel their biggest strength is their natural chemistry. "We don't have to pretend to be in love," they say. "We bring our love to the music." 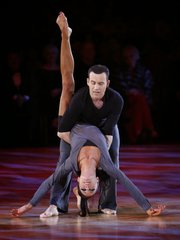 Max grew up in a performing family in Ukraine and started dancing at age seven, when his parents enrolled him in an after-school dance program. He moved to Los Angeles at age 12 and later won the U.S. amateur American Smooth and Rising Star International Standard titles with his niece Lesya. Michelle grew up in Minnesota and wanted to dance as a little girl, but she never had a chance until she enrolled in a performing arts high school at 17. Despite the late start, she went on to become a U.S. and World American Smooth Champion with her former partner, Edward Simon. Longtime friendly rivals on the ballroom tour, Max and Michelle only joined forces in mid-2014. Dancing for the first time together in competition, they each feel their past experience has prepared them for "the partner we were meant to dance with." 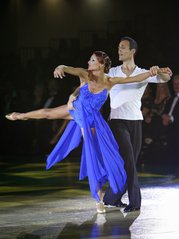 Like many other couples in this competition, Mazen and Izabela are immigrants. Mazen came to America from Lebanon, Izabela from Poland. Izabela began dancing at the age of five, but Mazen is a late bloomer – he didn't start dancing until 21. Since forming their partnership five years ago, they've become one of the top American Smooth couples in the world, known for a risk-taking style that captivates the audience. 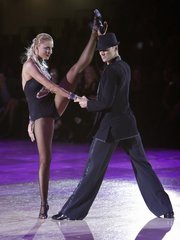 Travis and Jaimee have been dancing together for six years, and they've known each other since they were 13. Jaimee trained in ballet before switching to ballroom, and that training is evident in her beautiful lines, long stretches and perfect poses. She and Travis both attended Brigham Young University and were members of the perennial champion BYU Ballroom Dance Company. Tall and graceful, they epitomize the masculine and feminine roles the judges look for in a couple.

Emmanuel and Liana have been dancing together for six years and are the reigning World Professional American Rhythm Champions. Emmanuel is originally from Haiti, and he was born to dance: strong, athletic, expressive – a real showman. Liana, who was born in Russia, can match him step for step, she is so confident and strong. If feet and legs could talk, hers would be the most articulate on the dance floor.

This married couple has a long history of strong, solid routines. They each started dancing when they were about six years old, and they've been dancing together since they were teenagers. Natalie uses her playful nature and long legs to draw attention, and Andre is adept at providing the frame to show her off. Together they have great chemistry and a crowd-pleasing showmanship that makes them especially strong in the showdance portion of the competition.

Nazar and Irina both began dancing as children in Siberia. They've been married for six years, but they've been dancing as a couple for an incredible 13 years, making them one of the most experienced couples in all of ballroom. They have a mastery of all the American Rhythm dances, their routines are very polished, and they bring a crowd-pleasing charisma to the floor.

Misha and Vanda have been dancing together for only two years, but both have had long careers in the competitive arena. With her previous partner, Vanda was a two-time Slovakian champion in the American Rhythm style. Misha began dancing in his native Russia. They're both natural athletes, with backgrounds in swimming, soccer and gymnastics, and that athleticism is evident in the way they move, spontaneously and expressively, with the music. 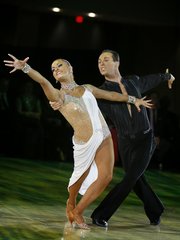 A multi-talented couple, Shane and Shannon Jensen are defending national champions in the cabaret style, now moving up in the ranks of American Rhythm. Shane was a gymnast before switching to dance, and you can see that background in the great strength he brings to their performances. He and Shannon met in college when both were in the Brigham Young University Ballroom Dance Company. They've been married – and competing together – for five years. Because of their cabaret background, they're able to incorporate difficult choreography into their routines – a factor especially important in the showdances. 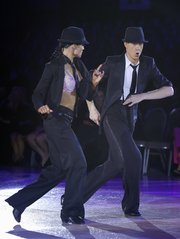 Already world champions in American Smooth, Peter and Alexandra (Sasha) are now rising fast among the world's top American Rhythm couples. In this style, their dynamic hip and leg action comes more into play, making their dancing even more sexy and romantic. They're technically proficient, dynamic and polished, and they bring the same great presence to the dance floor that they do in Smooth. Their versatility has made them U.S. 9-dance champions – the best overall dancers in the two American styles of ballroom. 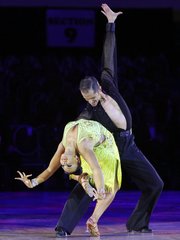 Decho began dancing at the age of eight in his native Bulgaria and moved to America when he was 25. He won the U.S. American Rhythm title three times with his wife and former partner, Bree Watson. Decho now lives in Arizona and is a sought-after teacher and coach. Natalie is an undergraduate at Arizona State University and has been studying ballroom with Decho for two years. She is very rhythmic and has an amazing connection with the audience. He shows her off well and lets her be the star. 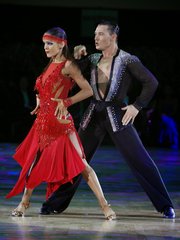 Sasha started dancing at the age of 10 in his native Ukraine and moved to the U.S. in 2007. He's been teaching and dancing with Cheyenne for the last three years. She was trained in ballet before she started ballroom dancing, and you can see that influence in her incredible body control. Sasha and Cheyenne are both very athletic and have great energy, speed and footwork. They're also natural performers, with a charisma that allows them to connect with the audience.