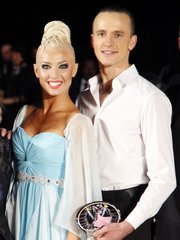 Artem Plakhotnyi and Inna Berlizyeva placed first in the group dances and withstood challenges from six other couples in the showdance to hang on and win the International Standard competition and advance to the grand finale. 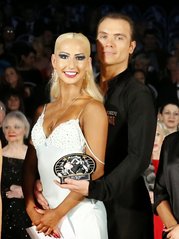 Roman Kutskyy and Anna Kovalova dominated the International Latin competition, placing first in both the group dances and the showdance and beating out five other finalists to advance to the grand finale. 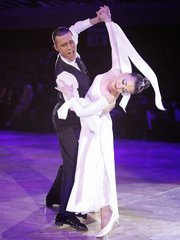 Iaroslav and Olga have been dancing together for less than a year, but they've really clicked as a couple and are rising through the ranks. Iaroslav's uncle is a dance teacher with a studio in Ukraine; he began dancing at age six. Olga began at age eight because it was required at the school she attended in Russia. Tall and graceful, they maintain a beautiful line as they dance, consistently delivering polished routines and covering a lot of space with their long strides across the floor. 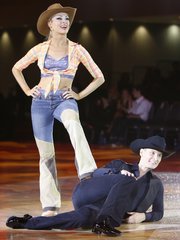 Together for 11 years, Anton and Anna are five-time Canadian champions and are ranked in the top 10 in the world. They both started dancing as young children: Anton in his native Lithuania, Anna in Ukraine. Because the hockey arena was too far from his boyhood home, Anton's parents took him dancing instead; he didn't like it at first but grew to like the feeling of winning competitions. Anna got hooked when her grandmother took her to a ballroom dancing performance when she was eight. The sight of boys in elegant tuxedos, girls in feathers and flowing skirts – all twirling to beautiful music – made a powerful impression on her. One of their strengths is spontaneity. Anton reacts to the music in the moment, and Anna responds to his lead. 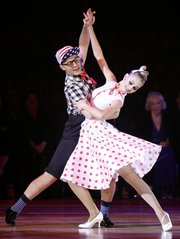 This couple has only been dancing together for about two years, but they're coming on strong. Both started dancing as very young children, Lenka in Slovakia and Oscar in Italy. Lenka's mother worked in a dance studio and put her in a class to keep track of her at age five. Oscar, like all Italians, played soccer as a boy, and only took up dancing when he got sick and needed to stay indoors one winter. He hated it at first but grew to love it. They're not as tall as some of the other couples, so they rely on playfulness, passion and exquisite musical expression to stand out. 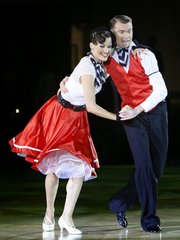 Both these competitors started dancing before the age of 10 in their native Russia. Igor quit not long after his parents got him started, but he was so talented that his teacher urged him to come back. Dancing has been his passion ever since. Before meeting Ekaterina, he was a three-time U.S. amateur champion. They've been dancing as a couple for more than five years, and they've already won several championships, including Rising Star titles in the U.S. and Britain. They project great power on the dance floor and use emotion to enhance their performances.

Artem and Inna both began dancing at an early age in their native Ukraine. In 2005, they moved to Arizona, where they teach and train. They've been dancing professionally together since 2009 and, in that time have become one of the leading International Standard couples in the world. Inna has a regal presence on the floor, and they always deliver dynamic, creative and polished routines. Artem and Inna were recently married. 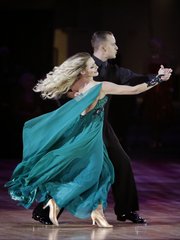 This couple has only been together for a year and a half, but both have been dancing since early childhood. Denis began at the age of seven because it was a required course in his native Russia; Lesya grew up in England and began ice skating at age four but switched to ballroom at six. Interestingly, her uncle Max is also a ballroom dancer who now competes in American Smooth. They used to be partners, but Lesya found her passion in International Standard. She and Denis have a polished, elegant style and are well balanced despite their height difference. 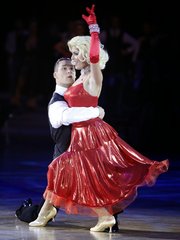 Both Andrey and Anna began dancing at age six – Andrey in his native Ukraine, Anna in Russia. Anna took dance lessons at a local community center as an after-school activity, following in the footsteps of her older sister Katusha, who would go on to become a world champion. After moving to New York, Anna began dancing with Andrey, and together they won many youth titles. Anna later teamed up with Igor Mikushov to win the U.S. national amateur championship among many other competitions. After a stint on Dancing with the Stars, Anna returned to competition four years ago, reuniting with Andrey.

This couple has been dancing together for only about two years, but they've made great strides, winning the Canadian professional Latin championship and making the Ohio Star Ball finals two years in a row. Kamil was born in Poland but moved to Canada as a toddler. He credits his flexibility and reflexes to his years playing goalie as a boy, but his mother signed him up for dance classes at age nine, and eventually he gave up hockey to focus on dancing. Anna started dancing at age eight in her native Ukraine. Her mother wanted her to stop when she realized how much time and money the lessons took, but it was too late: Anna was hooked. They met on Facebook after Anna saw that Kamil was looking for a new partner. They dance with great speed and intriguing choreography. Kamil is very masculine and brings out the best in Anna's performances, and she uses her beautiful legs to great advantage in this Latin division.

These two have been partners for only three years, but both started dancing as children in Russia, Andrey at age nine, Yulia at six. Yulia's mother signed her up for both ice skating and dance; worried about falling on the ice and bloodying her knees, she gave up skating to focus on dance. These two Russians didn't meet until they moved to Los Angeles and began competing on the American circuit. In 2012, between partners, Yulia called Andrey and suggested a tryout. They clicked immediately. Since turning professional two years ago, they've quickly risen through the Latin ranks, making the finals in many top competitions – including the Ohio Star Ball for two straight years. Asked what their greatest strength as a couple is, Andrey replied "My greatest strength is my partner, Yulia."

Both these performers began dancing early in life, Dmitry at age five in his native Russia, Olena at age eight in Ukraine. After moving to the U.S., they met when they shared a cab from the Las Vegas airport to an event in which they were competing with other partners. Since becoming a couple three years ago, they've come on strong, finishing second in the U.S. national Rising Star competition for two straight years, winning the Rising Star competition at the Ohio Star Ball in 2013, and making the professional finals there for the first time in 2014. A relatively short couple, they make up for it with great speed and dynamic range in their performances. 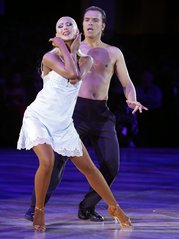 Roman and Anna both began dancing in elementary school in Ukraine. Roman's mom signed him up, and he stuck with it because he liked a girl in the dance class. Anna's mom signed her up because she'd never been able to achieve her own dream of becoming a dancer. They didn't meet until they both moved to Los Angeles. Roman knew instantly that Anna was the girl for him – on and off the floor. They've been dancing together for six years and married for five. Two-time champions at the Ohio Star Ball, they're a beautiful couple: He's very muscular and she's very feminine and sensuous. They are the total package – looks, charisma and chemistry. 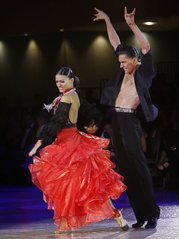 Both these competitors began dancing early in life in their native Russia, Evgeny at age four at the urging of his mother, Maria at seven when her doctor said she was too skinny and needed to build her strength. They became partners five years ago in Moscow. After splitting with her former partner, Maria learned about Evgeny on the Internet, called him and arranged a tryout. They knew instantly they were right for each other. Evgeny soon moved to Los Angeles and urged Maria to join him, but visa problems delayed her arrival for two years. Since reuniting, they've risen through the Latin ranks, finishing in the top four in several competitions and now making the finals of the Ohio Star Ball. They dance with a great sense of purpose and capitalize on Maria's extraordinary flexibility. 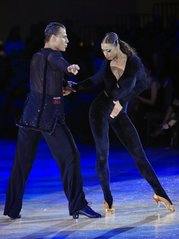 This couple has only been dancing together for one year, but they've already had great success. They were the U.S. national Rising Star champions earlier this year. Vitalii wanted no part of dancing when his mother pushed him into it at age seven, but he discovered he liked it – especially the girls. By 13, he was so committed that he left his small town to study dancing in Kiev, the capital of Ukraine. Eugenia began studying Russian folk dancing at age eight and then switched to ballroom at age 12. Her mother is a professional swimmer, so she's got a strong athletic background. They bring great energy to the dance floor. 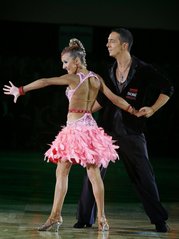 Ilya was born in Moscow and started dancing at the age of six. He moved to America in 1996, and went on to become a U.S. 9-Dance champion, performing the nine required dances in the American Rhythm and Smooth styles. He now owns a studio in Pennsylvania, where one of his students is his niece, Naomi Spektor. Ilya has been teaching Naomi since she was three, and now, at just 13, she's a talented dancer with a bright future. 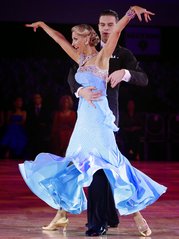 Sergey began dancing 20 years ago at the age of eight, when his mother suggested he do something after school. He resisted at first, but his commitment to ballroom dancing has paid off in a big way. Robin has been dancing even longer, since the age of five. She's one of those dedicated amateurs who work just as hard as the professionals. As a result, she's won five national Pro-Am Championships, the last three of them with Sergey. They're tall and graceful, with great carriage and excellent choreography.