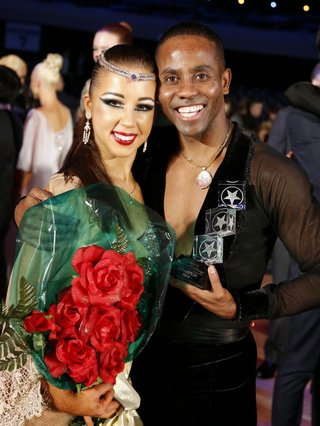 Liana Churilova and Emmanuel Pierre-Antoine In the grand finale, four championship couples (seen in previous episodes) compete across dance styles to determine a single winning couple. At the end of the grueling competition, the judges name one of these couples "America's Best." The third episode also features exhibitions by the best couples in the cabaret division, plus two pro-am exhibitions.

In a thrilling finish, Emmanuel Pierre-Antoine and Liana Churilova narrowly beat out Roman Kutskyy and Anna Kovalova to win the title “America’s Best Ballroom Couple.” Emmanuel and Liana won the short program with an acrobatic mambo. But Roman and Anna won the long program with a stunning, Spanish-flavored paso doble featuring some unusual cape work. The difference came down to this: Emmanuel and Liana finished second in the long program, while Roman and Anna finished third in the short program. That single point determined the outcome.

With a strong second-place finish in the short program and a fourth in the long program, Peter and Alexandra Perzhu finished third overall.

Finishing fourth overall, with a third-place finish in the long program and a fourth in the short program, were Artem Plakhotnyi and Inna Berlizyeva. 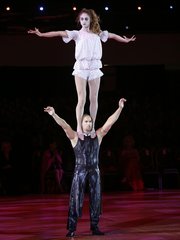 Carlos began dancing at the age of six in his native Venezuela, where dancing is a vital part of the national culture; by 12, he was dancing for money in the streets of Caracas. Dora began dancing at age eight in Bulgaria – inspired in part by seeing ballroom dancing on television. Both later moved to Canada, where they met and became partners in 2009. They've been cabaret finalists in Britain's prestigious Blackpool competition for three straight years. They attribute their success to their longevity as a couple, their strong personal connection and their unique sense of artistry – evident in their unusual performance in Ohio.

This couple has been dancing together for just three years, and they've already won the U.S. Cabaret championship. Kimalee started ballet dancing at age nine, then switched to cabaret at the suggestion of her studio owner, and fell in love with it.  Justin is a relative newcomer – he's only been dancing for about five years. A former bouncer, he has the tremendous strength needed in this style of dancing. He started off as Kimalee's student and at first was only interested in the lifts. Now, the couple strives to be equally strong in the dancing. In fact, they've become such a strong couple that they also compete in 9-dance, performing all nine dances in the American Smooth and Rhythm divisions. They convey a strong sense of story, and their transitions are very smooth. 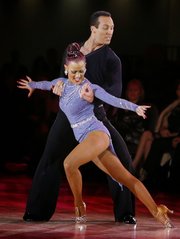 This couple has been among the top cabaret dancers in the world for the last few years, winning several national titles. Shane was a gymnast for seven years before switching to dance after watching a performance his brother gave in high school. You can see the gymnastics background in the great strength and balance he brings to their performances. He and Shannon met in college when both were in the Brigham Young University Ballroom Dance Company. They've been married – and competing together – for five years. A multi-talented couple, they also made the finals in the American Rhythm competition at the 2014 Ohio Star Ball. 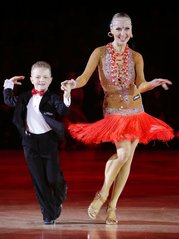 Alla started dancing at the age of 13 in her native Russia.  She moved to the United States in 2006 and, with her husband, now owns a dance studio just east of Los Angeles. Her partner is her son, Daniel.  Alla says Daniel is a natural born dancer – dedicated and easy to teach. At the ripe age of seven, he can already claim a world title in the Preteen International Latin division. Grace clearly runs in this family.

Erminio started dancing at the age of 12 in his native Italy. He moved to the U.S. in 2001 and, with his former professional partner, won the International Standard Championship a few years later. Celia has been a dedicated amateur for many years. For the last four years, she's been competing with Erminio in International Standard, but with her former partner she won the Pro-Am International Latin Championship at the Ohio Star Ball, showing her incredible versatility.