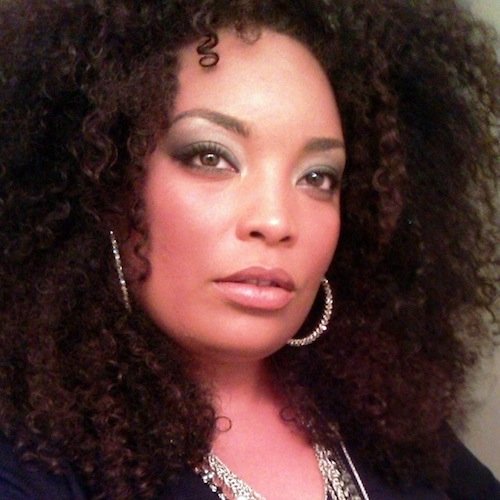 Angela Davis is a passionate and self-taught home cook, food blogger and aspiring personal chef who utilized social media to further her passion for food and encourage others to learn how to cook better, healthier meals at home.

Angela took a particularly keen interest in her late twenties to learn how to cook and eat better in efforts to improve her health. She was inspired to begin sharing her journey with others and is the mind behind Kitchenista Diaries Food Blog.

Which African Americans in the food industry inspired you and how?

Food is an integral part of popular culture these days.  I’m coming up in the culinary field amidst an explosion of magazines, cooking shows, celebrity chefs, food blogging, food trucks and even political food movements.  My generation is inspired by all of these influences just as much if not more so than what our parents or grandparents taught us about food and cooking.  It’s opening up the culinary world to us by way of exposure to new ingredients and techniques we may not have learned at home. However, many of us were still very much inspired by the people who cooked in our families.  For me that was primarily my late grandmothers – one who cooked a lot of soul food and another who prepared traditional Cape Verdean dishes – both of my parents, and many of my aunts and uncles.  As I started learning how to cook and began to develop my own style, I was inspired by chefs like Emeril Lagasse and Bobby Flay whose shows were becoming popular on television around that time. They taught me a different way of blending traditional American and southern foods with influences from Portuguese, Creole, Latin and Southwestern cuisine.  All of that strongly resonated with my family’s background and the places I’d lived.  Later on, thanks to an explosion of reality shows and social media, for the very first time I started to see black chefs who were cooking upscale food. That was a revelation to me, as I started to bridge a connection from the home style dishes I grew up on to the gourmet dishes I wanted to learn how to cook. Today I look to chefs like Carla Hall and G. Garvin for inspiration, both of whom have shown us that comfort foods can be healthy, prepared well, and still remind us of our roots.  By way of social media I have taken an unconventional path to get my start in the food industry, so these days I am most inspired by a myriad of food bloggers and young people who have a grassroots approach to encourage home cooking and raise awareness about things like the sustainable food movement, veganism, and food legislation, all of which has changed the way I cook and shop for food.

Based on your experiences, why do you feel there is an underrepresentation of African Americans in the food blogging world?

I think we first have to look at young people and the influences and opportunities we receive through primary and secondary education. There’s definitely an absence of culinary education in most schools and a stigma surrounding service jobs, both of which prevent many black students from seeing the food industry as a viable career option.  Looking back, other than one home economics class in middle school, I don’t remember culinary arts being introduced at any point in my education.  If cooking classes had been offered right alongside electives such as art and music, I undoubtedly would have had a better chance of finding my passion at a younger age.  I was pushed towards math and science, which is great, however food wasn’t a path I ever thought to take.  It can be challenging enough to excel under the pressure placed upon black students to succeed in academia, and in the schools I went to there were already few of us represented in advanced courses.  I don’t know if many of my peers could have fathomed sitting down to tell our parents about a desire to pursue a career in the food industry as opposed to business, medicine, law, etc. Considering that they came up in a time where it was hard enough for blacks to be accepted in professional fields, a problem of perception exists – after all, we fought for decades to get jobs outside of domestic work – it may be seen as “beneath” a talented young black student to pursue a career in the food industry. This is a shame really, because food is a field with just as many opportunities for us.

What do you think it will take to both raise the profile and increase African Americans' representation as food bloggers?

Despite the fact that there are plenty of talented, hard-working black chefs, caterers, restaurateurs, and food bloggers like myself out there, how many black faces do we regularly see let alone know by name? Not many, even with all of the exposure to the food industry in entertainment. That could be discouraging to somebody who may not see a real possibility or opportunity to succeed in the food industry as a black professional. We need scholarships and funding programs to help students who may have an interest in the field but not the financial means to attend culinary school, as well as for adults like me who have considered a career change but have difficulty finding culinary programs that cater to my unique needs as a working mom. We need black mentors to train us and teach us the skills necessary to navigate an industry which unfortunately has a reputation for being exclusive rather than inclusive especially when you look at higher end restaurants.  We need black chefs and food professionals who are working in the industry today to be present in our schools, our communities and in social media. And because our first experiences with food are usually at home I believe a critical step in increasing representation of black people in the food industry is to get them interested in food in the first place, especially children and young adults. I’ve personally taken a role in promoting home cooking, which seems to be a bit of a lost art these days among my generation and the next one coming up. If we can encourage families to make cooking part of their daily routines as much as it was in the past, it could be instrumental in inspiring a new generation of future chefs and food professionals.

Compounding the lack of visibility for blacks in the food industry are cultural issues we can attack surrounding the very essence of our food itself – people need to know there is room for those of us with interests and talents outside of traditional southern cooking or soul food,  to include vegetarian and vegan cuisine. But there is also room to make soul food a bigger part of the fine dining experience. The same goes for non-American cuisine such as Caribbean and African foods, which we rarely see at the forefront of mainstream media or the restaurant industry, but are very much a part of our culture. It’s on us to raise awareness that there are infinite possibilities for blacks in this industry regardless of the cuisine you cook or path you take to get there. We have the tools and resources available to us to bridge those gaps ourselves, so let’s become advocates to get more cooking shows on air with black chefs, food magazines catering to the black community, and encourage entrepreneurs and investors to open and support black-owned food establishments. Food has always been an important aspect of black culture in our homes, so it’s only right that we work to not only keep it that way but turn it into career opportunities for our people as well.

Did you notice any of these themes?
The Kitchenista, Angela Davis, is one of 15 culinary insiders that we interviewed as part of a special feature on Black chefs. We identified four themes that surfaced across many of their responses and in our research. Did you notice any? Select a theme to learn more.
* The Facts vs. The Facts
* Perceptions of the Industry
* The Relevance of Color
* Exposure
comments powered by Disqus
Providing Support for PBS.org Learn More
Providing support for PBS.org Close X