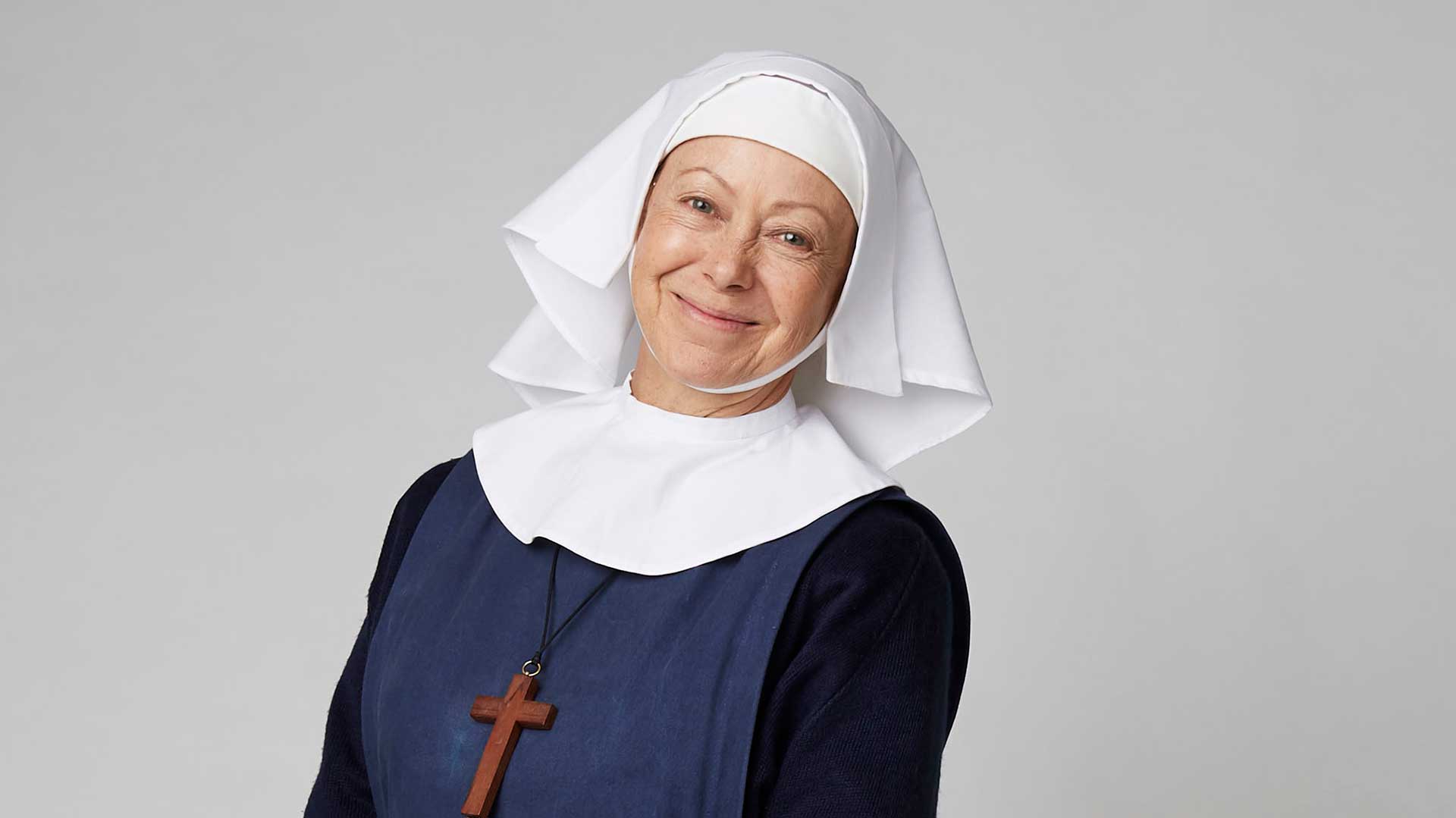 Sister Julienne is the Sister-In-Charge at Nonnatus House. Deeply religious, she is also profoundly practical and confers dignity on her patients through her sensitive, non-judgmental approach.

She is often called upon to mediate between her fellow sisters when they quarrel - this is an almost exclusively female world, and her tact and gentleness are essential to its happiness.

Tolerance, enjoyment and a passion for what she's doing. She's passionate about it. She loves her dedication to the families in Poplar and in particular the mothers and the babies, and taking care of all of that. I think that's what's so difficult about the 2018 Holiday Special is suddenly all of that is on the cards and she might have to give that up.

What's one thing that's overlooked about Call the Midwife?

One of the people that nobody thinks about are the people who create the sense of place. And it's in the little things, you know, it's in everything that we have around us. It's in the posters on the wall and the cards that are around sets. Helen, who puts the props together, makes sure always that there's one's pen in place. If I'm in my office, there's mail there. I've opened letters and found wonderful, rather distracting letters inside, which are written to Sister Julienne from somebody. They're real -- they just make one have a sense of place.

What do you think about the scripts?

Each year brings social and economic change, the scripts reflect the way Nonnatus and the local community deal with these changes. It’s exciting reading the scripts.  The way the stories unfold is always a surprise to me, they are completely honest about people and situations, but very cleverly devised so you are never sure what will happen. I particularly admire the way Heidi Thomas shows how moments of fun and enjoyment keep one going through difficult times and that the moments of loss and sadness come when least expected.

Tell us about entering the Sixties.

It’s really interesting getting to the 1960's, this is a period of time I remember as a child, the pop music, the London fashions, Twiggy, the Beatles, moon landings, JFK, the Cuba crisis. I was aware I belonged in an exciting world, I knew nothing else.  It would have been a very different experience for Sister Julienne who had been through two world wars, has seen huge social change, and is possibly puzzled  by the innovations and  changing aspirations of the younger people around her.

Have you got any anecdotes from meeting fans of the show?

I continue to find that people approach me much more than they ever have on any other production.  I’m still surprised by the fact that men, women, all ages, all social and cultural backgrounds can identify with it in some way. I enjoyed a moment on a long train journey down to Cornwall when I realised someone was watching Call the Midwife on their laptop. I sat very quietly behind her, but then my husband spotted what she was watching and pointed it out to her saying; “Actually the real nun is here” she replied “yes, I know”.  She was being discreet, bless her I thought!

Why is music important in the series?

Music plays a big part for me in the series and you immediately have a feel for the period from the songs that are there.  When you’re young your parents always play songs that are a little bit behind so you get this mixture of periods. Now we’ve got the 60s coming you’ll hear different music. I sometimes wonder what Sister Julienne’s music was as it would have come from the 30s. Then against the popular music of the times, the plainsong in the chapel gives such a feeling of continuity and calm.

The plainsong is very meditative; it’s wonderful if you actually start the day with these scenes. There’s something about the shape of the music and the breathing that makes you focus.

What do you like about this period and what do you think it teaches us today?

People in the 50s were getting over the war and they were grateful they had survived. During the war they were developing the National Health Service, the Unions were working well and people’s lives were improving. They were losing all that belonged to the Victorian and Edwardian societies which was blown away by the war, the world was changing. In the 60s, there was a sense of emerging into something extraordinary with very different views being expressed through art, design, science. It was a very creative time; things developed that had been held back for so long. The society was still dealing with poverty and restraints but there was an expectation that a new and better world was there for us.

I think we live in extraordinary times now because there are so many possibilities with new technological developments, for exploring information, to understand more things, be more diverse, more tolerant and yet we’re not. With all the possibilities to communicate, we seem to be less able to tolerate. After the war, there was clearly a desire to understand one another and take responsibility for each other but it’s something we seem to have given up. Perhaps we’ve forgotten the strength a real community has – not a community that is made up of people that are stuck with fixed ideas, but one that is encompassing the new and allowing itself to develop.

Where are your favorite places to film on set?

I love the common room which is filled with great magazines and the bits and pieces that make up the nuns and midwives lives. I also love my office because on my desk there are always letters and the props department have taken the trouble to create worlds and lives in the letters so that if I glance down I can read a wonderful thank you letter from someone in Poplar referring to how well they were taken care of.

How much pressure do you feel to keep true to the character she is based on?

I hope that I have stayed true to character. It is important to keep the continuity. However, different directors have different ways of seeing and telling stories and perhaps the way they interpret the characters may make them appear different. But I love referring to the notes given to me by the niece of the character I play which are very full and descriptive and give me an image of the person I want to portray. I have a number of photographs as well; the geniality, simplicity and humour of the woman is apparent in these photos.

Attention to Detail on Set
The cast members of Call the Midwife discuss the new set for Nonnatus House.