See how a community of scientists and fisherman can help restore our threatened oceans.

World renowned scientist, Dr. Jeremy Jackson, tells Sanjayan the oceans are in trouble, that a “rise of slime” is coming. But Sanjayan goes in search of a very different future. He travels to one of the remotest reefs on earth. The sheer number of sharks in this place doesn’t make any sense — the mass of predators is greater than prey. It seems like a paradox. But when you understand it, you see how our oceans can be more productive than we could ever imagine. And it’s predators that may hold the secret to bringing back productivity to all our oceans. 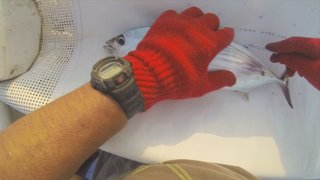 Tuna is tagged in Papua New Guinea. Passion Planet In Papua New Guinea, a fishing boat is intercepting one of the world’s greatest migrating species. But these tuna aren’t being killed; they’re being tagged. It’s part of a global operation where every kind predator is being followed right across the world — like a "Facebook" for fish. And when you follow the predators’ profiles they lead us to highly productive areas or “hot spots.” A detailed living map emerges that allows us to protect the parts of the ocean that matter most.

Bimini, Bahamas
But all this new power is no good if we can’t apply it on our doorstep. In the Bahamas, lemon sharks are coming to give birth, and Dr. Samuel Gruber is stepping in as the midwife. He wants to take just a few of the shark pups and get them to a safe haven. He’d rather not interfere with the sharks, but the sharks need his help if they’re to have a future.

Sanjayan even discovers hope in the face of the most global threat — he discovers how some fish might protect coral from a changing climate. And it doesn’t end there. New science is showing that the coral itself has secret hidden defenses to a warming ocean. The way to see how is flood the reef with ultraviolet light, seeing a psychedelic ocean like it’s never been seen before. Scientists are now using all this new knowledge of corals' resilience to engineer a reef from scratch. In the Florida Keys, they’re growing one of the biggest man-made coral gardens on earth.

Sea of Cortez
The idea of engineering the wild is taken to new extremes in Mexico’s Sea of Cortez. A series of giant “aquapods” hang suspended beneath the water. One hundred feet across, they look like floating planets — truly a vision for the 21st century. Inside the “aquapods” they’re growing fish that give us a chance to keep our planet fed as our demands on the ocean increase.

New York City
Tackling the apocalyptic prophesy of a “rise of slime” clearly requires a monumental effort, but if you want proof of what’s possible then there’s one place to go — Pier 29, New York City. In these post-industrial wastelands they’re turning the tide on the rise of slime. The secret is oysters. They’re bringing these filter feeders back to purify the habor and turn a wasteland into a wilderness. If we can avert the rise of slime here, then you really do get the feeling we can do it anywhere.

Tagging fish gives us the ability to track and gather data on the movement of fish stock.

Learn the story of the discovery of the haunting song of the humpback whale.