Official Trailer
Journey to Yellowstone, where wildlife survives one of the greatest seasonal changes. 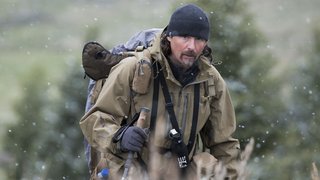 Casey AndersonPhoto by Paul Thompson Greater Yellowstone is a unique place. Nestling high up in the Rocky Mountains in North West America, this ecosystem is one of the world’s greatest wildernesses. But it’s a place of extremes, and the wildlife must deal with one of the toughest springs on Earth. To understand how, this series is following a number of iconic wildlife families – including wolves, grizzlies, Great Gray Owls and beavers. Using the latest filming technology, the team of scientists and cameramen track the animals and analyse what’s going on. Host Kirk Johnson, the Sant Director of the National Museum of Natural History, heads the team and also gets to grips with the science behind what makes Yellowstone tick.

The story starts in winter when temperatures plunge as low as minus 40 degrees Fahrenheit. Then as the temperature increases during spring and summer there’s a dramatic event at the core of this seasonal change – the thaw – when a torrent of meltwater cascades down the mountains and into rivers and lakes. How will the animals be affected? 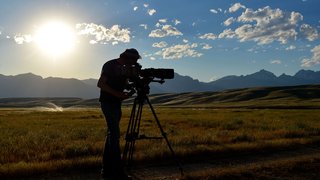 Charlie Hamilon James films in Elk Refuge.Photo by Lucy Bowden A Yellowstone winter is brutal, and the grizzlies hunker down and hibernate. But this winter the temperatures have been erratic and some bears are emerging early. Finding food is a huge challenge, but our camera crews follow one male who’s lucky enough to hit the jackpot and find a bison carcass. But there’s pressure from the scavengers.

The population of Great Gray Owls is vulnerable in Yellowstone, and this winter they’re suffering as their prey hides under an icy layer of snow that proves almost impossible to break through.  Cameraman Jeff Hogan follows them to see if the lack of food will affect their ability to raise a family in the Spring. And even when there are chicks born, can they all survive?

Down on the Snake River infrared cameras spy on beavers fighting inside their lodge. Plus Kirk dons a dry suit and heads underwater to admire the engineering skills of these rodents. Massive boulders and branches are there to strengthen their dams, but will they be enough to withstand the thaw? 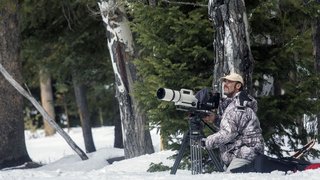 Jeff Hogan filming Great Gray Owls.Photo by Paul Thompson And top wolf biologist Doug Smith outlines why he’s concerned about the number one predator. With a winter that’s had less snow than usual it’s favoured the prey and the wolves are starving. As the year moves on, things stay tough for the wolves, but there is one pack that by summer has overcome the odds and has eleven pups. Charlie Hamilton James in on the trail to understand how they’re being kept alive.

Throughout the year ,bear expert Casey Anderson follows the grizzlies. But there are two young orphans, and can they survive without mum to teach and protect them?

Summer in Yellowstone brings soaring temperatures, drought and wildlifes. When a major blaze breaks out in the Beartooth Mountains, a team is scrambled  to see if the family of Great Gray Owls has survived.

And as our climate changes, Kirk explores the effects on life in Yellowstone. One animal that’s struggling is the pika. These alpine mammals rely on the cold high up in the mountains. But as temperatures slowly increase, the pikas are struggling. Kirk meets a scientist studying them to see what’s going to happen when there’s nowhere left to go but the sky.