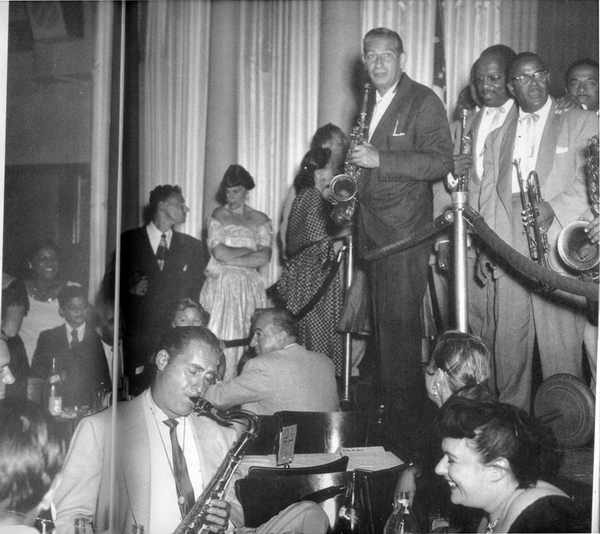 As clichéd as it sounds a picture really does paint a thousand words. Recently, I posted this photo to Facebook that generated over a thousand impressions and comments. The subject: Latinos and Jews.

In my research for an upcoming book on the life and times of salsa music legend Larry Harlow, known as El Judio Maravilloso, (“the Jewish marvel”), I came across an interesting coffee table tome by Myrna Katz Frommer & Harvey Frommer “It Happened in the Catskills.” As I skimmed its chapters my eyes scanning the various black and white photos decorating many of the pages, I stopped at the Concord Hotel. There in the center of a packed ballroom, sitting at one of the tables, is a steamy looking Sid Caesar wailing his saxophone, oblivious to the shock and surprise of both the patrons and the uncredited band I recognized as Machito & his Afro-Cubans.

The elegant ballroom with its draped columns, linen clothed tables littered with glass bottles, half-filled glasses, and a high coiffed, couture-styled clientele contained a common nightly summer ritual a mainstay of cultured entertainment, dining and dancing of the ‘50s & ‘60s: top comedian, a popular headliner and a Latin music orchestra.

“Didn’t know Sid Caesar played the sax,” began the many comments. Followed by a list of some of the noted jazz bands Sid jammed with. Some spied what looked like a feuding couple standing by the roped off stage as others noticed the brown looking people already on the stage or the suited little boy on the far left of the photo. A few noticed the woman looking up at the band while several pointed to the laughing patron across from Sid’s impromptu blowing. A scurry of comments began as to the identity of the sax player on the stage as all the Latinos on the thread immediately recognized the pissed off look of musical director Mario Bauza. Machito stands in total surprise behind Mario who is being restrained by the comforting arm of lead trumpet player Alfredo “Chocolate” Armenteros as he gazes over at that zany Jewish guy stalling the show with a look that says “I’ll have what he’s having.”

Built by many Eastern European Jews after W.W.I. escaping not only Russians and Nazis but also the sweltering overcrowded Lower East Side ghetto of an America turning from agrarian life to industrialization, the Catskills was the poor man’s oasis from a blistering segregated City whose signs once warned, “No Blacks, No Jews, No Dogs.”

With close to 200 hotels in Upstate New York an hour north of the City stretched out over vast, verdant green acres of land between Monticello and Ellenville in Sullivan and Ulster County, the Catskills was the “Hamptons” of its time.

Today the 85-year old trumpeter “Chocolate” Arementeros, considered the Afro-Cuban Louis Armstrong fondly recalls the Catskills Resorts of Upstate New York as close as he could get to Cuba without the palm trees.

“For more than a decade we played steady summers with Machito at the Concord Hotel. It was like a small City in itself. We stayed in the bungalows, hanging with the rest of the entertainers, the staff and those that couldn’t afford the fancy hotels… After the Sunday matinee show we’d all ride back to the bungalows by car and have a good old fashioned Cuban fiesta outside, roasting a pig on a spit with white rice, black beans, rum and coke. We partied together like family. My son even learned how to golf there.”

“The Borscht Belt had a Spanish heart,” recalls Larry Harlow. “It was nothing short of a ‘Latin music Mecca’.”

Just as the golden era of the big band sound ruled the airwaves of the 40s and 50s with Glenn Miller, Duke Ellington, Benny Goodman, and Stan Kenton standing by them was the rumba and the mambo! Each hotel had a rumba band in the lounge and a big band or orchestra in the ballroom for the evening show. Top bands played at different hotels every night. Jose Curbelo, Xavier Cugat, Tito Puente, Tito Rodriguez, and Machito were only some of the big names in mambo that played the Catskills.

As a child Larry Harlow saw “hundreds lined up for the free poolside mambo lessons. Killer Joe Piro heated the ballroom with his dance class before moving all those Jews to dance like draidels to “the Matzoh Ball Mambo” or “Romanian Rumba.”

“The music had a sad joy to it, like Jewish music with a kick. A magical sound that raises the hair on the back of the neck with anticipated excitement it was a different time. We were coming out of a war and a depression, going from immigrant status to mainstream citizens. We needed to let loose, we needed to feel free but most important we needed to be Jews, to still feel like part of a clan.”

Latin music bands entertained at every bar mitzvah and Jewish wedding. Balding, middle-aged, overweight Jewish men twirled with beautiful women gliding around the floor as if they weighed 100 pounds. The mambo was the Jewish waltz. Incredible. Latino musicians grateful for steady work knew enough to play Hava Nagila to a mambo beat. As recent as last year, Harlow and his Latin Legends titillated the guests at the Bar Mitzvah for the son of Paul Schaeffer.

With too many similarities to ignore, the vibrato voices of Spain’s rumba flamenca suggests the phrasing and timbre of Jewish cantors at temples. Puerto Rico’s mountain folk music has this “cantoric” flavor to its voices as if they sung at shul, emoting an intense pathos of passion, pain and struggle mixed in their history of survival. Echos of this synergistic dance between cultures and African races resonate through the Spanish cobblestones of Seville’s Cultural Corridor where King Ferdinand appointed a free black as governor over the mixed population as he plucked a Sephardic Jew for court musician and the first to set sail for America with Columbus.