Dressing Up for War: Living Life in a Hoop Skirt and Corsets 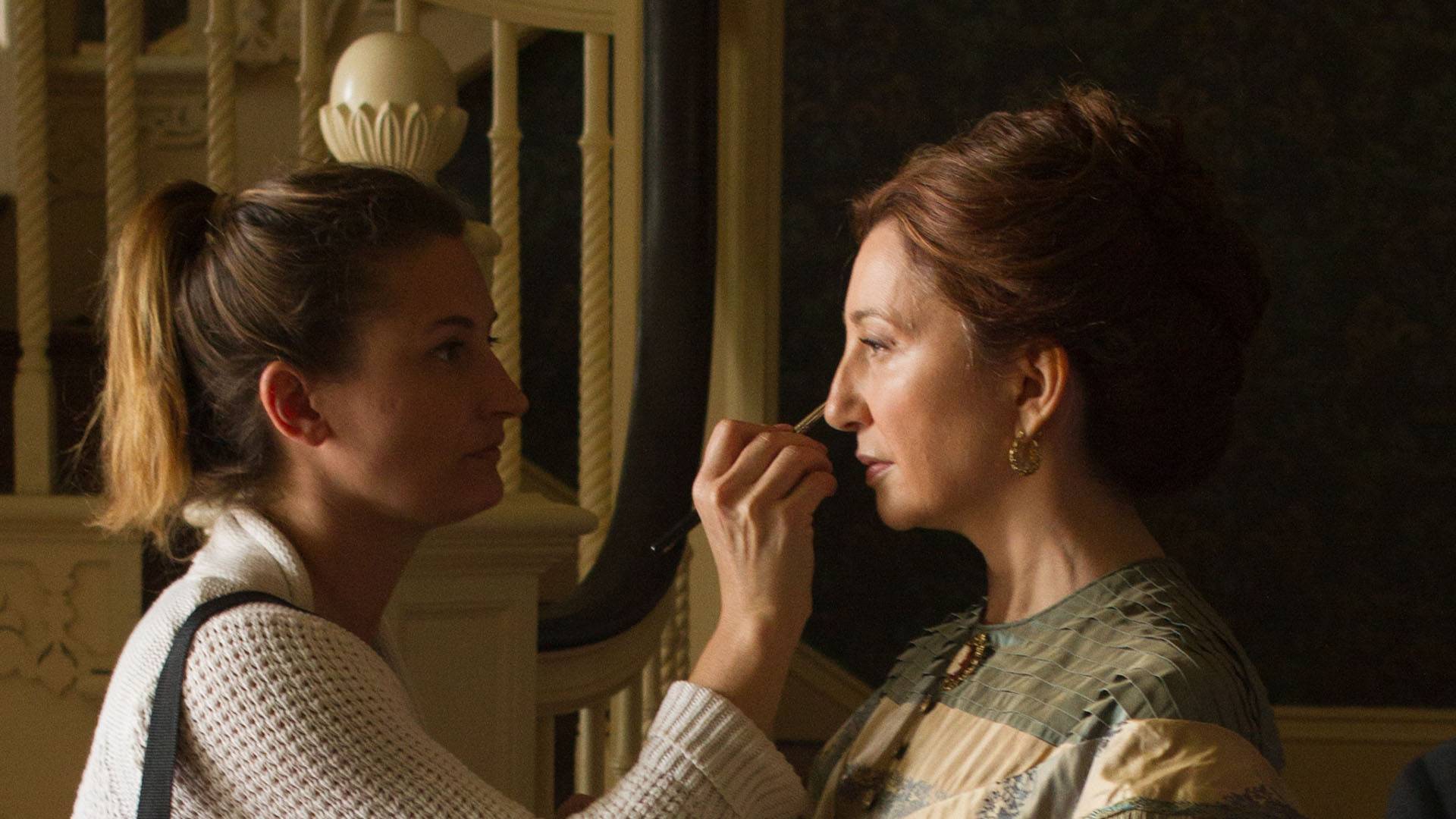 Donna Murphy gets made up as Jane Green in Mercy Street.

In this blog post, Schultz tells how dressing up as an extra for Mercy Street gave her new insights into the lives and restrictions of 19th century women.​

Dressing Up for War: Living Life in a Hoop Skirt and Corsets

When offered the chance last summer to be an extra on the set of Mercy Street, I jumped at the chance. We were in the midst of filming several season 2 hospital scenes in Richmond, Virginia, and I am always up for a new experience. I have no acting aspirations whatsoever. It simply occurred to me that dressing up for war might lend me additional insight into the lives of 19th century hospital visitors—the sort of women whose letters and diaries I’ve been tracking since the 1980s.

I got more than I bargained for: a better understanding of the intricate labors and long hours expected of wardrobe, makeup, and hair stylists on a production set, but I also received an education about the bodily rigors imposed on elite women during the war years. It’s not that I was only just learning about 19th century dress. I had studied it and discussed it with students for many years. But there is nothing quite like literally walking in the shoes of women from that era. 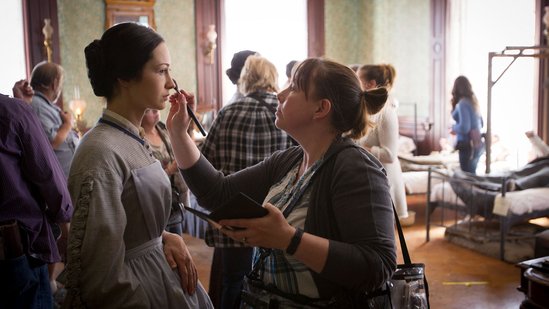 Hannah James, who plays Emma Green, gets a touch up during filming. And when I say, “walking in the shoes,” I mean not only shoes but petticoats, corsets, hoop skirts, shawls, reticules, and the other sartorial accouterments of community women who visited their local military hospital to lend a hand. Such women were occasional visitors—not the sort who sought daily work or were hired by the Union or Confederacy as nurses, like Mary Phinney or Anne Hastings. They were women who saw a need and tried to alleviate it by bringing home-cooked food and domestic supplies to sick and wounded soldiers, and they were not bound by the modest dress code that applied to full-time female hospital employees.

Whereas female hospital staff like Matron Brannon, Nurse Phinney, and Nurse Hastings could not have worked effectively in conventional women’s wear of the day—in fact, Union Nursing Superintendent Dorothea Dix had expressly banned “bows, curls, and hoopskirts” on the job—those stopping in to donate goods, comfort the fallen, or to tour the environs were dressed more formally. If prospective hospital workers had not considered the difficulty of wearing conventional clothing before arriving in their hospitals to work, they were quickly disabused of the impracticality of such wear. When Alabama’s Kate Cumming arrived in Corinth, Mississippi, in 1862 to nurse men wounded at Shiloh, it was nine days before she could even remove her dress to bathe. Hospital work was a corset-less, hoop-less enterprise of necessity.

After I learned that I was to be a hospital visitor stopping to talk to a patient as I made my way down a hall, I was sent to Johann, the chief of wardrobe for Mercy Street. His beachhead consists of a series of subterranean rooms in a school annex attached to the building known as “Mansion House Hospital,” where the hallways are loaded with rolling racks of costumes worn by each of the actors and extras. It is not hard to imagine that Jane, Emma, and Alice Green command linear feet of these costume racks, whereas people playing wounded soldiers or scullery maids are allotted more meager real estate.

There is no room for personal modesty in this world. I was told to strip down to my skivvies, whereupon Johann held several corsets up to my body in search of the one that would best fit. A corset cinches in the waist but it also serves as a de facto girdle, emphasizing the ratio between wasp waist and ample hip measurements, the hourglass ideal of 19th century couture.  The right one selected, Johan began to lace me up; he pulled the strings and then pulled again as I gasped for air. “It’s not so bad, is it?” he asked.

Johann, now smirking, gave me a shoehorn and some pointers, and together we stuffed my feet into what appeared to be doll-sized leather boots.

I could only imagine what this would have felt like in the 1860s when corsets were manufactured with whalebones instead of plastic tabs. I could not take in a full breath, although my posture was magnificent. It would not have been possible to wear a corset and not stand (or sit) bolt upright. But inhaling a full, fresh, lung-filling breath of air? That was impossible, and it gave me new, lived appreciation for what our ancestors endured.

If you cannot take in a full breath, then you cannot run, bound down steps, or extrapolate from physical freedom to the psychological potential unleashed by freedom of movement. Nor can you project much beyond how good it will feel when you are liberated from this restrictive body armor. The corset, I thus realized, was an assault on imagination and possibility—and I had not even been petticoated yet. At this juncture I was wrapped in three undergarments: a fretwork of hoopskirts, a long, frilly petticoat to sit on top of the hoopskirt, and a tutu-like circlet of netting below my waist to keep the hoop skirt buoyant.

Forty minutes into this episode, I was ready to be decked out. Indeed with the intricacies of the underlayment, the need of middle-class and elite white women for servants became crystal clear: no woman could have managed these maneuvers on her own. Locating a dress that would fit was relatively easy after this, and the “dress” was actually a shirt and voluminous skirt that stood at attention, thanks to the architectural “foundations” below. Next, shoes of the half-calf lace-up variety—shoes that did for my ankles and shins what the corset had done for my posture.

Mind you, I could not put on these shoes. After several attempts, Johann, now smirking, gave me a shoehorn and some pointers, and together we stuffed my feet into what appeared to be doll-sized leather boots. When I took a step, I had to glide and leave a wide berth so as not to topple any passersby with my hoops; and sitting was at this point simply beyond me.

It was now time to add the finishing touches to this costume. Johann dug deep to find a shawl and lace collar that would complement the fabric of the dress and then decided that a belt might cover a multitude of sins. He could create a trompe l’oeil effect by pinning the edges of the shawl well within the orbit of my waist. In other words, this trick made it look as if I were, in fact, wasp-waisted rather than the full-figured doyenne of the dinner table that I know I am. To complete the look, a bonnet with sash, gloves, and a cloth-bag reticule for my smelling salts—in case I should need them after breathing in the putrid air of the sick room. With instructions to head (or waddle) to the hair department, I placed the gloves in the reticule, then forgot to put them on once I made it to the set!

Nakoya Yancey, a wizard with women’s hair, spent the next fifty minutes intensely focused on the top of my head. She teased most of my below-the-shoulder-length tresses in the hope of wafting them aloft and she created flying buttresses with braided hair extensions, which she retrieved from her car while we were in medias res. I did not watch in the mirror while this masterpiece was in progress; I wanted to be surprised—a bit like the parent who doesn’t learn the sex of her offspring until it is a fait accompli. 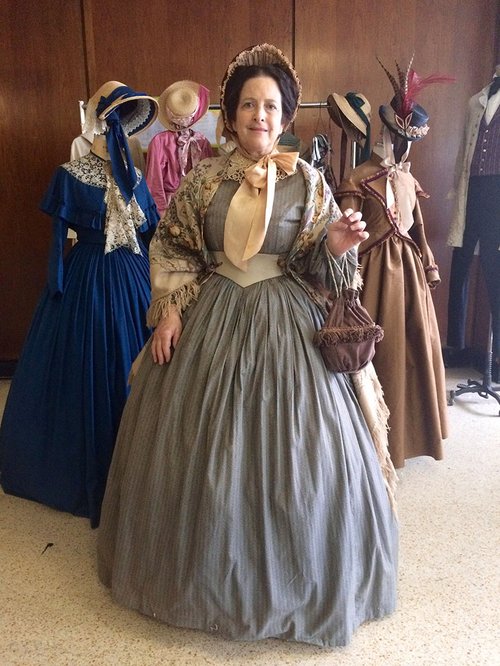 Final result: Jane Schultz in period costume on set of Mercy Street. Nakoya combed, brushed, and pinned; pinned, brushed, and combed—we were now nearing the end of the second hour of my transformation—until she succeeded in producing the matronly look we were going for. After this, having makeup applied was anticlimactic and took no more than 10 minutes: a little base coat, some blusher, and mascara, but no lipstick. The only women who would have worn lipstick in this milieu were fancy women—the sex workers visible where soldiers congregated.

Now I was ready to trek up to the second floor of Mansion House and begin my brief walk through the shot, where I’d stop to talk to a patient in a wheelchair before moving on to the next and perhaps, for the combined labors of this long-suffering but stoic crew, not even making it from the cutting-room floor. But in the end, being in the shot was not really the point. The expertise of professionals who commonly put in 15- or 16-hour days to produce an authentic mis-en-scène was.

No detail was spared to make me look as if I had just walked out of a recent number of Godey’s Lady’s Book, the popular antebellum magazine that women looked to for fashion advice. The grit and determination of the production crew—from the wardrobe, hair, and makeup people to the set designers, props manager, and camera and sound technologists—made me a believer in what Mercy Street has become. Far more than any one actor or episode, it is a composite canvas with the power of a time machine, which allows everyone, from the producers to the consumers, to channel vicariously significant moments from the national past.

And that realization was easily worth the cost in discomfort, which I unwittingly signed up for in my Mercy Street debut. 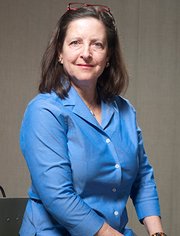