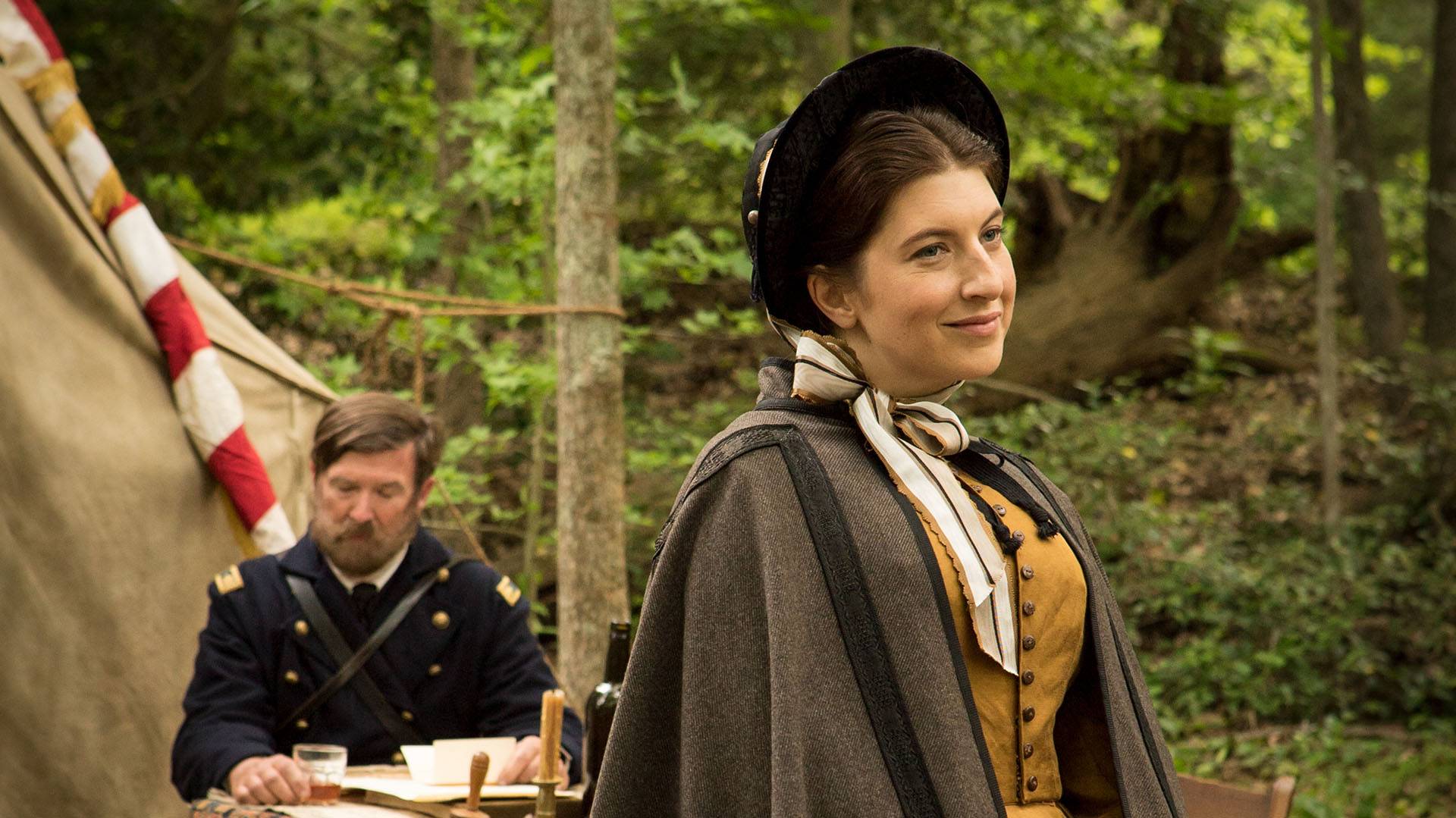 In this blog post, Schultz explains how the growth of the railway and urgent need for qualified nursing staff during wartime led to an explosion in independent women traveling the United States.

Nurse Mary Phinney is adamant in Episode Three about remaining at Mansion House to recover from typhoid. “Made weak by (war)time and fate,” she extracts a promise from Dr. Foster that she not be sent back home to Massachusetts to recover, explaining that there is nothing for her there. Once she learns that Maj. McBurney has sent Foster and Nurse Hastings away for the day and enlisted the help of Army Nursing Superintendent Dix’s office to dispatch her, she is furious—but to no avail. Framed by Tennyson’s poem “Ulysses,” the episode ends with Mary being carried aboard a vessel bound for New England and Foster arriving just in time to bid her Godspeed, to be “strong in will ... and not to yield.”

Although the excerpts from “Ulysses” provide a gloss on their growing mutual regard—i.e., the “one equal temper” of Mary and Jed—the poem also offers perspective on travel and transience. Ken Burns observed in his celebrated 1990 documentary that the Civil War gave American men an unprecedented opportunity to see their country; to travel to regions as soldiers that they could scarcely have imagined visiting before the war. The prospect of travel also beckoned to the tens of thousands of Union and Confederate women who sought jobs doing hospital and relief work. In their case, however, it was a radical departure from what they were used to.

Uncommon before the war for women to travel alone, even after the advent of “women’s cars” insulated them from the promiscuous hoard, the war rendered gendered restrictions on travel irrelevant. That and the construction of new railroad track—from 9,000 miles in 1850 to almost 31,000 in 1860—brought an abundance of new travelers, making it easier to traverse the long distances of the continent. 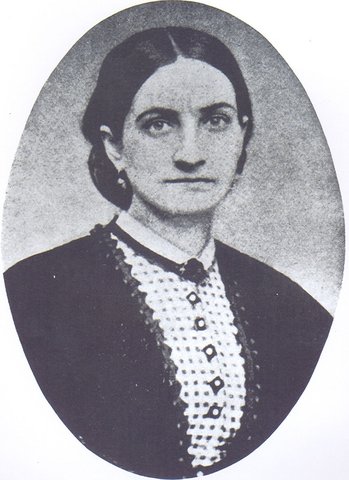 By July 1862, more than a year after it had been established, Dorothea Dix’s office of Union nurses paid to move employees from one hospital location to another, as well as to and from the theaters of war. Dix’s correspondence is filled with requests to provide transport for the more than 3,000 nurses she ultimately hired. One telegram from April 1865 asks the surgeon general to cover “Mrs. Spaulding’s” 300-mile trip home to Bangor, Maine. In her customarily staccato and inscrutable hand, Dix communicated that her nurse had already lost two of her four military-age sons and needed to head home to nurse the gunshot wound of a third.

Distance was no object for Dix’s nurses: a Mrs. Jellison took the cars from Baltimore to Boston (360 miles); Mrs. Harrison from Wilmington, Delaware, to Cleveland (425 miles); and Mrs. Phebe Miller from Washington to Keokuk, Iowa, a distance of 1,000 miles

Distance was no object for Dix’s nurses: a Mrs. Jellison took the cars from Baltimore to Boston (360 miles); Mrs. Harrison from Wilmington, Delaware, to Cleveland (425 miles); and Mrs. Phebe Miller from Washington to Keokuk, Iowa, a distance of 1,000 miles, after serving for the full duration of the war. When Secretary of War Edwin Stanton shut down Dix’s enterprise in September 1865, he stipulated that surgeons in Union military hospitals discharge their female staff and “furnish them with transportation to their homes.”

In most cases, journeys home took multiple days and would make today’s cramped airline travel look luxurious. But it is clear that even Dix's nurses, the most elite in the medical service, did not always receive courtesy. Take, for instance, the case of Sarah Tucker who fell ill on duty at Cumberland Hospital in Nashville in August 1864. Desiring to return home to Saco, Maine, her sister Caroline and brother-in-law John Nichols, both working with her in Nashville, put her on a train to Cincinnati where the local quartermaster, Captain Lewis, refused to cooperate. Letters was fired off from the Tuckers to Superintendent Dix to Quartermaster General Montgomery Meigs’s staff officers to Captain Lewis and back again, whereupon Miss Tucker’s transportation was finally approved on December 17, 1864—by which time she had fully recovered and set off for St. Louis—but not before she had been reimbursed $3.40 for her travel expenses. 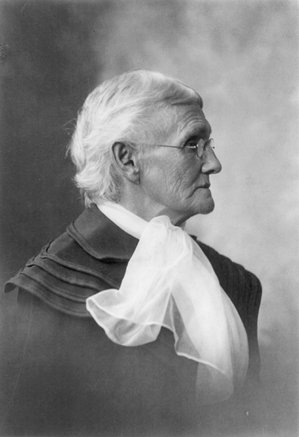 Mary Anne Bickerdyke circa 1898Library of Congress Although Dix’s office usually had the power of the Union purse behind it, it was not the only agency underwriting the travel of female relief workers. As the U.S. Sanitary Commission gained the confidence of the northern public, donations of money and goods poured into its coffers. Legendary nurse Mary Ann Bickerdyke of Galesburg, Illinois, was initially bankrolled by her hometown ladies’ aid society so that she could travel to the western theater’s hospital installations, but as soon as the Commission recognized her organizational genius and fortitude, which included floating a herd of cows down the Mississippi and Ohio Rivers to provide hospitalized soldiers with milk and beef, it took care of all of her expenses.

A Georgia woman named Fannie Oslin Jackson brought wounded soldiers from the 12th Illinois Infantry to her home in Resaca after the May 1864 battle and went on to nurse Union soldiers at field hospitals in Marietta, Vining’s Station, and Atlanta. Jackson was so valued for her diplomatic nursing skill that the Commission gave her and her two daughters $72 for six months of work—the same wage paid to Dix nurses—and transportation back home when the war ended.

When Union hospitals moved to Chattanooga in the winter months of 1864-65, soldiers collected another $100 for Jackson to express their gratitude. A Southerner who questioned the morality of slavery and found herself ministering to Union soldiers rather than men from her home state, like Emma Green, Jackson moved to Iowa and then Kansas, where she corresponded for fifty years with the family of Martin Bushnell, an amputee whom she had cared for but who did not survive the war.

Grateful regiments also helped provide transportation for women who had served faithfully in their ranks. Caroline Steuber, a nurse and laundress with the 2nd Missouri Infantry at Camp Halleck near Rolla, became so sick that the surgeon in charge arranged for her to be carried back to St. Louis. Catherine Oliphant, who served the 3rd Maryland Cavalry for two years through the Red River and Mobile campaigns and “who endured hardship and privation with the stoutest soldier,” was so “universally respected and esteemed” by the regiment’s soldiers and officers that they took up a collection for her trip back to the East and underwrote the cost of accommodations on the way.

Because transience was a way of life for any woman who assumed hospital and relief duties, Mary Phinney’s desire to recuperate at Mansion House is somewhat unusual. Only the woman without a home who made of the hospital a home away from home might have wished to remain among its denizens when she could no longer assist. Mary’s recent widowhood and childlessness shed light on her insistence to stay among her hospital friends once she has contracted typhoid. But such a desire, even though it could not ultimately be gratified, puts her in a minority: Most of those who left their homes and kin to help the sick and wounded would have preferred to recover within the private sanctum of home.