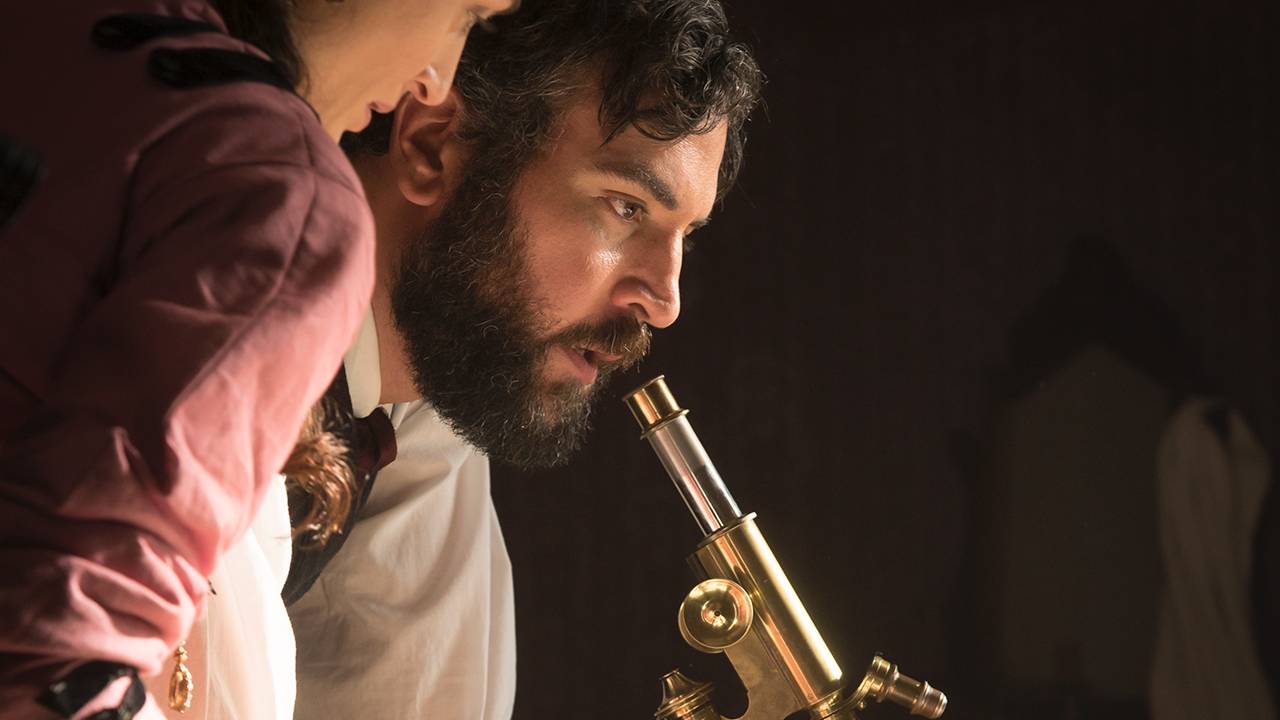 In this blog post, Devine discusses 19th Century microscopes and parasitic diseases and their treatments during the Civil War.

In Episode 204 of Mercy Street, we learn that Daniel is suffering from some kind of parasitic infection. The larvae has penetrated the skin, he is suffering from an itching and localized rash and underneath the skin the larvae has perhaps broken through the alveolar wall, moving through the bloodstream and lungs and travelling down the esophagus to the intestines. Consequently, the patient may also be suffering from increasingly painful abdominal pain and severe cramps. This case interests Foster, indeed many of the war physicians, who had limited experience treating and especially diagnosing parasitic diseases. It begs the question, what were parasitic diseases and how were they managed during the Civil War?

In Joseph Woodward’s Outlines of Chief Camp Diseases he classed Zymotic Diseases into four categories: Miasmatic Diseases; Enthetic Diseases; Dietic Diseases and Parasitic Diseases. He noted of parasitic diseases, that “tape worm, intestinal worms generally, and scabies, are included with certain diseases in which parasitic fungi have been noticed, as in aphthae, porrigo and the like.” Even though this class of disease had been studied prior to the war, parasitic diseases were still not well understood and were the subject of much debate before and after the war years.

Until the turn of the 20th century the parasite causing Hookworm had yet to be identified. It was not until the Rockefeller foundation took up the cause of Hookworm eradication between the years 1902-1909 that research projects took shape and which later resulted in the identification of the parasite. Hookworm, was largely a southern problem since hookworm eggs in human feces thrive in warm soil, where they can then hatch into larvae (immature worms). It was thought that the worm first arrived in the south in the bodies of enslaved Africans. Without the right conditions, the larvae could live outside the body only for a short time; however, certain parts of the south lacked proper sanitary conditions and infective larvae survived, even thrived for up to 3-4 weeks in the south’s favorable environmental conditions. The opportunistic larvae penetrated bare skin (usually by latching on toes and other parts of the foot) and from there traveled via the bloodstream to the heart and then lungs, down the esophagus, through the stomach, to the intestines. The larvae at this point mate and eggs may appear in the feces. 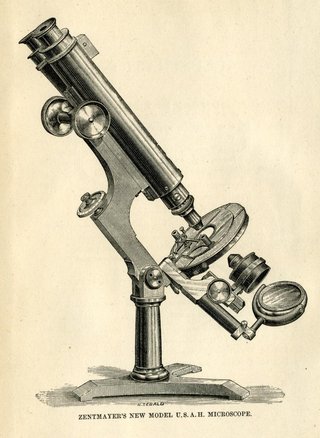 Zentmayer US Army microscopeNatn'l Museum of Health/Med Today when investigating parasitic diseases there are well defined laboratory practices. In the study of hookworm, for example, researchers might microscopically examine the sputum as a direct wet mount, if it is very viscous, sodium hydroxide may be added. Ideally when examining hookworm larvae, sputum would be obtained from lower respiratory passages rather than a sample containing too much saliva (though Foster and other physicians of the Civil War era would not know this). The process of examining larvae in the sputum or feces during the war era was very new and only the interested few elite physicians and scientific researchers would construct research projects around these questions.  Even then, sponsored research projects did not take shape until after the war. Thus, within the existing knowledge about parasitic diseases in the 1860s it would be far more likely to make the diagnosis of a parasitic disease by seeing eggs in the feces, rather than through the microscopic examination of sputum. In the years after the war, as parasitic diseases became the focus of research projects, patients who might have been diagnosed first with pneumonia, then TB, (or diseases which drew attention to bloody sputum) further opened-up the debates and discussion surrounding parasitic diseases.

However, physicians did use the microscope in their investigations into hookworm. The movement of the larvae as seen microscopically was variously described as "serpentine motion"; "movements consisted of coiling and uncoiling"; "one imperfect spiral” and "slender worms.” Larvae once observed in sputum, might be examined daily; 15-20 larvae might have been present in a sample and by 1890 they were measured under glass, and stools would be studied at length to determine type of worm. While this research generally took shape after the war, there were lively discussions about parasitic diseases before and during the war. Foster, like many elite Civil War physicians, would have been interested in Daniel’s case. As seen on Mercy Street, the case would have prompted more debates, research and possibly a publication. Importantly, these larger debates about diseases and concepts helped fuel the postwar research directives and projects.

But did Civil War Era physicians use a microscope in their research and to make diagnoses?

The more extensive use of the microscope during the Civil War represents the changing ideas about the cause and nature of disease and the body. As physicians cut open the body, studied lesions, and dissected tissues and organs, they saw that the process alone did not reveal much about how disease was caused or transmitted. One impulse among the war physicians, then, was to find different, perhaps more effective ways to study and understand diseases. The microscope became increasingly important as an investigative tool during the war. It was used to search for the causal agents of disease in the attempt to elucidate better the diseases under investigation and to arrest them. The microscope promised improvements or, rather, new possibilities for medicine.

The microscope furnished by the Surgeon General's Office was a Zentmeyer small-stand compound microscope, with an 8/10th inch lens and uncorrected 1/5th by the same make. Providing microscopes was part of the medical department's attempt to identify medicine with science and provide support for the emerging research culture. All physicians could apply for the opportunity to use a microscope in their investigations, but because of the cost and their relative scarcity in America, they were primarily restricted to those physicians affiliated with a general hospital or laboratory, those charged with the specific study of a disease, or those who wanted to contribute something to the development of scientific medicine. It was also common practice for physicians to order microscopes themselves so they could seize the opportunity of increased access to patients, bodies, diseases, and hospital work.  Some of the elite physicians owned their own or had had access to them in Paris, but essentially a new generation was introduced to microscopy.

Microscopic research was very new to most American practitioners. Moreover, cutting, staining, and mounting sections of diseased tissues and organs was both tedious, time consuming, and difficult. Thus, not all physicians produced the same results in their preparations, which generated methodological and epistemological debates about the place of microscopy in medicine. These debates dominated medical journals for the much of the nineteenth century; however, the new Army Medical Museum became an important repository and resource which highlighted the inconsistencies, taught new methods, and provided a forum in which microscopic findings could be debated. It was in fact the methodological problems, such as why contradictory representations of the same object continually appeared, which most allowed for the development of microscopic research in the medical museum.

Not every war physician would use or even see a microscope. But some did, and they went on to publish their case histories--which were made available to the many American physicians. In the process, newer methodological problems and practices were revealed, considered, and debated. While Civil War physicians did not make the larger connections between microscopic infusoria and diseases yet, the wartime research represents an important transition from the passive observer to the active experimenter, and these changing ideas about investigative medicine helped pave the way for government and privately funded research projects in unfamiliar diseases such as hookworm.