Last Updated by Rebecca Vaudreuil on 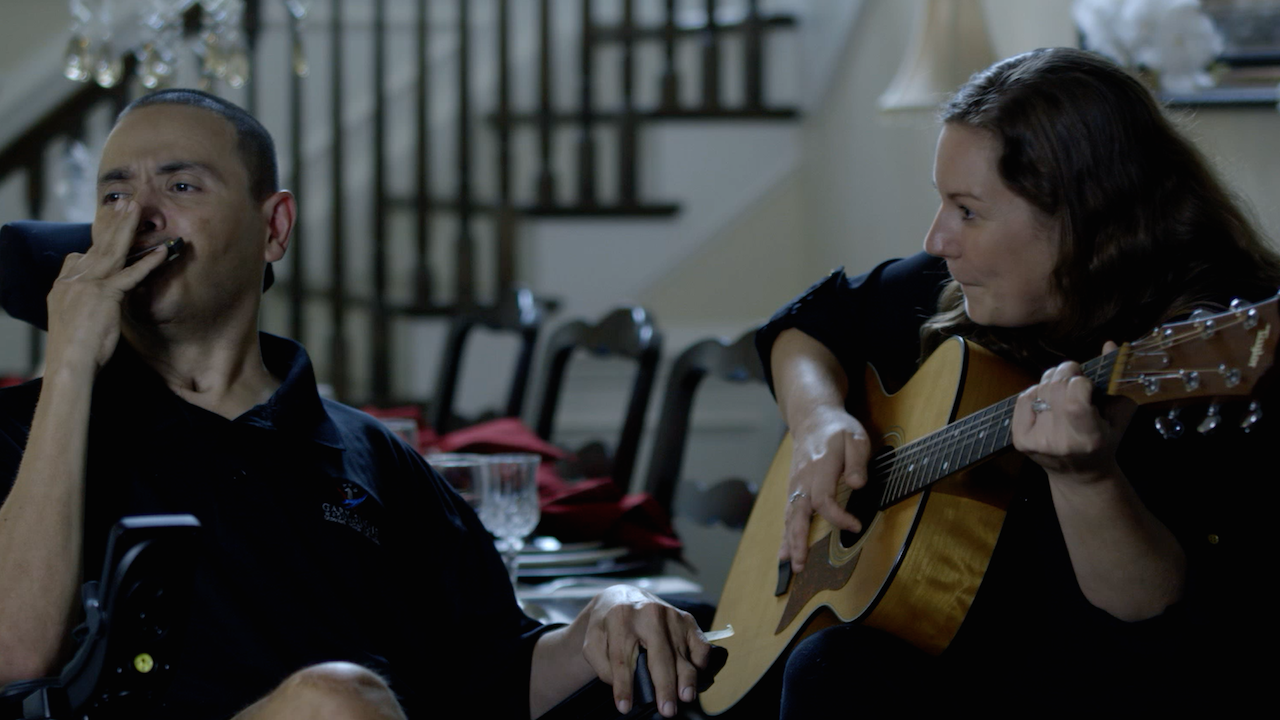 “Music doesn’t lie. If there is something to be changed in this world, then it can only happen through music.”

When I introduce myself as a music therapist, I often immediately encounter the follow-up question, “What does a music therapist do?” It may seem like a simple question that would yield a straightforward answer; but more often than not, those seven words spark a conversation in which the response is far lengthier than the initial inquiry. It’s like going down a rabbit hole of dialogue with Jimi Hendrix and Carl Jung: it’s fun, fascinating and sometimes difficult to explain exactly what I do as a music therapist. Therefore, instead of writing another blog focused on the history and theory of music therapy, I would like to have a conversation with you about my journey, thus far, as a music therapist, and how this journey has led me to work with the military. With this blog, I hope to answer questions that you may have about music therapy and describe the personal and professional journey of being in a specialized field that accesses the mind, body and spirit by empowering people to explore their creativity and find meaning in music – and themselves.

Like most professionals, I have created an elevator pitch, one that I would use if I were ever in an elevator with, say, Renée Fleming, and she asked me what music therapy was. I have refined it over the years, but for the most part, my elevator pitch goes something like this: “Music therapy is an established field in which music is used within a therapeutic relationship between a board-certified music therapist and patient. Music therapy is used with people of all ages – from 6 to 106 – and from all walks of life. I use music with patients to address non-musical goals such as physical, psychological and cognitive, and to promote social engagement. Music therapy interventions are uniquely and individually customized, and therefore depend directly on the needs of the patient. Music therapy can be an independent treatment, but since music is fundamental in speech, movement, emotion and other realms of the human condition, co-treatment with disciplines such as speech language pathology, physical therapy and occupational therapy, to name a few, is impactful.” Depending on how much coffee I’ve had prior, it usually takes about 45 seconds to verbalize this pitch, and much like the result of sweeping discourse stemming from a seemingly simple introduction, it often inspires follow-up questions. And so our conversation begins….

How long have you been a musician?

If you ask my parents, I have been singing since I was a baby, which makes sense as they are both musicians and exposed me to music when I was still in utero; however, my first concrete memory of music is singing in my church choir. I remember being captivated by the voices coming together in harmony – both the choir and the congregation. Everyone was singing as one, everyone was unified. That was my first experience with feeling that music can be more than something to be performed; it has the power to transform.

How did you become a music therapist?

I graduated from Berklee College of Music, where I earned a bachelor’s degree in music, majoring in music therapy. After my academic studies, I completed the required 1,200 internship hours and then passed the board-certification exam, earning the credential of a board-certified music therapist (MT-BC).

What instruments do you play?

My principal instrument is voice; however, in the music therapy degree program, I had to become proficient in guitar, piano and percussion – at the collegiate level. Other traditional instruments commonly used in music therapy are stringed instruments (ukulele, mandolin, viola, cello), harmonicas, steel drums and other melodic and rhythmic percussive instruments. Electronic instruments such as drum pads and music software are used for digital music making, recording and production of patients’ songs. Songwriting, music making and performance capture the essence of life experiences and contextualize them in a safe and supportive space, allowing patients to embrace their creativity, process thoughts, communicate feelings and share their stories through musical compositions that are both lyrical and instrumental in nature.

Do you play for your patients, or do they play? How does it work?

I employ music depending on patient requests, their needs and how to best address their goals. Music is not prescriptive; therefore, if we create ‘cookie-cutter’ music therapy interventions we most likely find ourselves needing to modify the therapeutic fabric to adapt to a vast array of needs and patient preferences. The ‘one size fits all’ mentality does not work from patient to patient or across populations. For example, if I am working with babies in the neonatal intensive care unit, I will play music that they can actively and passively listen to that will assist in regulating and stabilizing their vital signs. If I am working with a patient to increase targeted movement or diaphragmatic breath, I may encourage them to play a drum for movement or harmonica to promote desired respiratory patterns. If I am working on communication skills with children in a special education setting, I may implement an intervention that utilizes a combination of listening and playing through turn-taking. Within the military, the inherent sociality of music is in line with the unique camaraderie that exists among military personnel. From a sociobehavioral perspective, music is used as a catalyst for prompting communication of self-insight and emotional expression.

How did you start working with the military?

I moved to San Diego to complete my internship at MusicWorx. and I lived in proximity to two bases and a military community. As I acclimated to the greater San Diego area and integrated into different networks, I developed a deepening recognition and respect towards the surrounding military co-culture. Knowing that the field of music therapy started in the military after World Wars I and II, I researched current music therapy programming that served the military and found that although music therapy was customary in the VA, there were no sustainable music therapy programs that served active duty service members at military treatment facilities. After I completed my internship and earned my board certification, I got an opportunity through my then employer, Resounding Joy, to start a music therapy pilot program on bases in the greater San Diego area. Thanks to support from the Semper Fi Fund, I worked on multiple bases, from NAVY Base Point Loma to Marine Corps Base Camp Pendleton. Working with the military, specifically with service members who experience traumatic brain injury and/or post-traumatic stress, motivated me to learn more about how typical and non-typical brains process information. After almost four years of working in the field, I was inspired to pursue graduate studies in educational neuroscience. After earning my master’s degree from Harvard Graduate School of Education, I headed to the National Capital Region where I joined the National Endowment for the Arts Creative Forces Healing Arts Network, a partnership between the NEA and the Department of Defense. It was there that I was able to bridge my music therapy and neuroscience studies to create a music therapy program for our nation’s heroes, like CPT Luis Avila, among many others.

Why do you do what you do?

Throughout my career as a music therapist, I have had amazing opportunities to work with preemies and hospitalized children, adults with developmental disabilities, special education classrooms, older adults, hospitals in India and homeless shelters in Jamaica. My work as a music therapist is an inherent calling and my work with military populations has surpassed being solely a profession for me; it has grown to become my life’s passion, thanks to all the heroic and selfless service members and their families that I have had the honor of serving and knowing throughout my career so far.

The distinguished Mr. Colin Powell said, “Leadership is solving problems. The day the soldiers stop bringing you their problems is the day you have stopped leading them. They have either lost confidence that you can help them or concluded that you do not care. Either case is a failure of leadership.” Through this quote, Powell, demands a strong and compassionate approach to leadership. I am aware that the service men and women I work with are leaders in many ways – of their families, in their communities and for their country. My duties as a provider is to lead patients on a healing journey, assisting them in achieving recovery goals and learning skills that they can access throughout life. This requires a balance in leadership between clinician and patient, and music is an effective motivator and an agent of mindfulness allowing this balance to be achieved through a fluid process. Music occurs in the present time, demanding those who engage in it, to be in the present when they create or appreciate music. So often we are affected by the past and driven towards the future that we forget about the present, which is where healing occurs, as it is where life occurs.

In music therapy sessions, we often start and end with music. In conclusion, to be consistent with my practice, I would like to circle back to the quote that commenced this conversation, the great Jimi Hendrix so aptly stated, “Music doesn’t lie. If there is something to be changed in this world, then it can only happen through music.” A patient once said to me, “When I write songs, I can’t lie because the lyrics that I write are my truths, and sometimes that is all we have.” 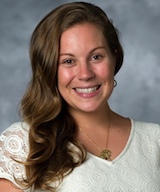 Rebecca is a board-certified music therapist who earned her bachelor’s degree in music therapy at Berklee College of Music and her Master of Education at Harvard Graduate School of Education with a concentration in educational neuroscience. She founded military music therapy programming through Resounding Joy in 2010, which provided the first sustainable music therapy program model implemented on military bases in support of active duty service members, veterans and family engagement. Vaudreuil is the Music Therapy Program Lead for the National Endowment for the Arts Creative Forces Military Healing Arts Network providing rehabilitative music therapy services for wounded ill, and injured service members at the National Intrepid Center of Excellence at Walter Reed National Military Medical Center and the Camp Pendleton Concussion Care Clinic. Though Creative Forces Vaudreuil develops military music therapy best practices and supports expansion and increased access to creative arts therapies across military and veteran healthcare systems, promoting arts-based partnerships in clinical and community settings. She serves as the National Military Liaison and Director of East Coast programs for Resounding Joy, a San Diego-based non-profit organization that uses therapeutic and recreational music programs to improve the social, emotional, physical and spiritual well-being of individuals and communities. Vaudreuil's music therapy work with military populations has been featured by CNN, on ABC's World News Tonight with David Muir and most recently on PBS as part of the 2017 National Memorial Day Concert. She is a featured lecturer at various national and international symposiums, conferences and universities and she travels annually to Jamaica with the Jamaica Field Service Project to supervise music therapy in special education schools, hospitals, infirmaries and homeless shelters.