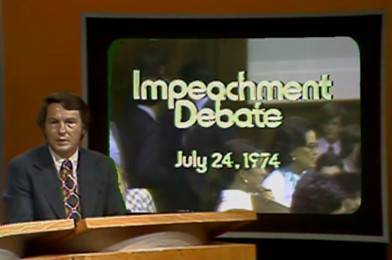 It is true that this week, when you tune into your local PBS station during prime time, you’ll see Antiques Roadshow or NOVA running in their scheduled evening time slots. On your primary PBS channel, you are not likely to see rebroadcasts of the U.S. House of Representative’s public inquiry into the possible impeachment of President Donald Trump.

I am disappointed by that prospect, as are many PBS viewers. Over the Veterans Day weekend, some 200 people were upset enough to complain to me in writing. Many more sent emails to local stations and echoed social media calls for PBS to dump regular prime-time programming on its main channel in favor of rebroadcasts of the hearings.

The impeachment inquiry is indeed historic: It will make public the testimony of a roster of witnesses to presidential conduct in his talks with Ukrainian leaders, actions that many say merit formal impeachment hearings by Congress.

A Forceful Complaint From a PBS Legend

No demand for this all-day coverage was louder than the full-page ad that ran on Friday in The New York Times, in which legendary PBS journalists Bill Moyers and Michael Winship urged the system to add night-time replay of the hearings “for the sake of the nation.”

Moyers and Winship were persuasive, urging that PBS fill its broadcast day with the hearings, a drastic interruption of valuable prime-time programming that would be a “small price to pay for helping preserve the republic.”

Moyers said PBS should air the Trump impeachment inquiry at night, matching what it did 45 years ago during the Nixon impeachment hearings. I remember being transfixed by those hearings, watching them at home with some of my brothers and sisters after we got home from school.

But I also remember some critical differences in the broadcast and journalism environments of the 1970s, and today. Five decades ago, the impeachment hearings turned daytime programming into can’t-miss TV. This was due, in large part, to the reality that there were but three national networks and the public broadcasting system dominating air waves at the time. There was no cable television, no CNN, no Fox News, no C-SPAN. In that constricted environment it was indeed a bold move when the young PBS, looking to establish itself as a national alternative to the three commercial networks, replayed the hearings at night. Millions of people, like me, who worked during the day or were in school, were able to witness the historic proceedings.

Today, the Trump impeachment inquiry is no less historic. But the news and broadcast environments today are vastly different. There are now countless TV and digital channels ready to air these hearings live and gavel to gavel. Many – including PBS – will indeed rebroadcast the hearings, in prime time, but on related television channels and via on-demand services and the Internet.

A Long Roster of Viewing Options

Still, I was skeptical that the evening repeats this time could be easily found by people who won’t be able to see the live hearings. I asked PBS executives to detail the coverage plan for the hearings, which are expected to last well into next week. Was it true, as Moyers had asserted on CNN, that PBS was relegating rebroadcasts to pay TV, the Internet and a hard-to-find digital channel? What about would-be viewers who don’t want — or don’t know how — to find PBS streamed content or the World Channel, which will replay the hearings at night?

“How in the world — no pun intended — does it serve democracy to hide the hearings from people who come home from work to see them but don’t have cable, satellite, and Internet access?” Moyers and Winship asked in a column on Moyers’ website. “If PBS were truly an alternative to corporate networks, it would repeat the hearings in prime time for the mass audience. Period.”

Turns out the Moyers and Winship criticism missed the mark a bit. On top of that, many readers and viewers went on to misread the Moyers-Winship statements. In many of the concerned messages sent my way, the writers incorrectly assumed that PBS was foregoing even the daytime gavel-to-gavel coverage of the hearings.

The PBS broadcast plan seems pretty robust, even if it isn’t the round-the-clock, live and rebroadcast coverage you are more likely to see on C-SPAN and some cable-TV news channels. And, contrary to what Moyers said, the World Channel is available – for free and on regular TV – to two-thirds of the nation’s television viewers.

“PBS will ensure that Americans have access to the impeachment hearings when and how they want to view them,” said Jeremy Gaines, PBS’ senior vice president for corporate communications.

PBS will broadcast the hearings live with expert analysis from the PBS NewsHour team.

PBS will also make the hearings available via livestream for free and available to all on pbs.org and the PBS app (available on ios, Android, Roku, Apple TV, Android TV, Amazon Fire TV, Chromecast and smart TVs), as well as Facebook, YouTube and Twitter.

After the live telecast, the hearings will be available on-demand (for free) across digital platforms, including PBS.org and the PBS video app, as well as Facebook, YouTube and Twitter.

The hearings will re-air in primetime on WORLD, a digital broadcast channel carried by 157 public television stations representing 64.4% of US TV households.

Moreover – and this is important – PBS’ NewsHour will run expanded journalistic coverage of the hearings, in prime time. Meanwhile, PBS prime-time viewers on the main channels will get regular, on-screen information on where and how to find rebroadcasts of the hearings, running across the bottom of the TV screen as a “crawler.”

An Improvement From the Clinton Hearings

This is actually an improvement from the last time there were impeachment hearings in Washington, D.C. When Bill Clinton was impeached in 1998, PBS only televised the live hearings during the day, skipping night-time rebroadcasts altogether.

It’s clear to me that PBS executives are taking the Trump impeachment inquiry very seriously. They want to make sure that everyone who wants to, can catch a full broadcast of the hearings.

Maybe the seriousness comes from the proximity PBS executives have to Washington, D.C.. In this town, we seem acutely tuned to congressional hearings. In D.C., significant hearings are treated like big-time sports events. Bars make good money opening early to show the proceedings on big screens to platoons of political nerds looking for a good way to watch, and sip Bloody Marys. But the rest of us won’t have to go to a bar to see the full hearings, live, or rebroadcast at night. PBS, and a large community of broadcasters and journalists, will turn these hearings into something you’ll have to work hard to miss.