In 2015, a mysterious virus, eventually identified as Zika, first appeared in Brazil, flooding clinics with patients. Health care workers and researchers working in Brazil made a startling connection between the increase in prenatal Zika virus infections and the growing number of babies born with microcephaly and other devastating birth defects. The year before, as the world watched in horror, the Ebola virus tore through the heart of West Africa, leaving some 12,000 dead in its wake. The outbreak was historic: ten times worse than all other Ebola outbreaks combined. And beyond the headlines, out of the spotlight, other threats were unfolding at the same time: legions of viruses were continuing their march around the globe, largely unreported. Nipah. Chikungunya. MERS. All are diseases caused by viruses that reside in animals and spill over into humans. Over the last half century, the number of spillover diseases has increased rapidly. What's behind the rise in spillover viruses? What can we do to stop them? And what have we learned from the ultimate containment of Ebola? 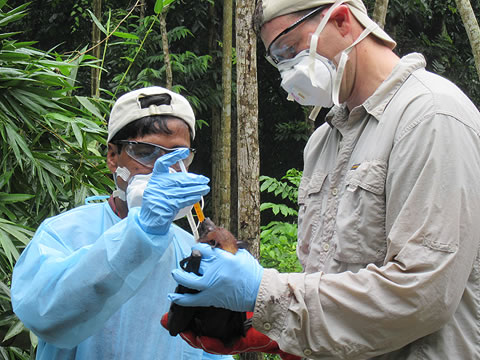 Dr. Jonathan Epstein and a colleague feed a bat mango juice before it is released.

Spillover — Zika, Ebola & Beyond is a harrowing drama that follows scientists into the world's hot zones in a search for answers. And it does so while providing much needed scientific context for the most recent Ebola and Zika outbreaks. Battle-hardened health workers and survivors share their untold stories, such as how a courageous band of Nigerians jumped into the breach to stop Ebola from turning into a truly global pandemic.

Spillover — Zika, Ebola & Beyond extends to the new frontiers of disease detection, prevention, and containment. The film travels the world with virus hunters who are tracking old enemies while vigilantly looking out for new foes. Along with cutting-edge science, the film investigates low-tech, but tried-and-true methods to stop viruses from spreading. And the film delves into the microscopic world of viruses to see how they turn our own cells against us to produce legions of infectious offspring. Through in-depth interviews with leading public health experts and epidemiologists, viewers find out how human behaviors increase the likelihood of spillover events, and how science is learning to anticipate, and tame, spillover events. 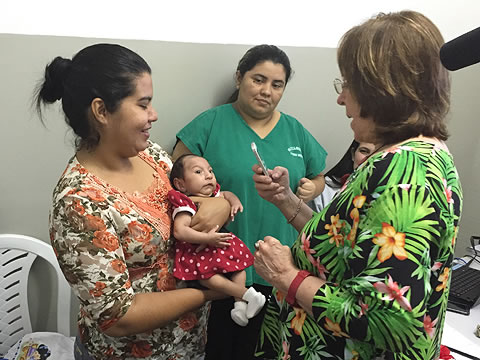 At Candido Vargas Institute in João Pessoa, Brazil, a geneticist examines an infant with microcephaly, a brain defect associated with Zika virus infection.

Filmed on four continents, Spillover — Zika, Ebola & Beyond sheds light on one of the most important public health challenges of our time—predicting and stopping the next pandemic. The film is a rich mix of cutting edge science and inspiring personal stories of both tragic loss and selfless heroism. Graphics reveal the invisible world of viruses—organisms that reside in the nether land between being "alive" and "dead"—and animation portrays some of the most dramatic moments of the recent Ebola crisis.

Answers to burning questions, and hope against a seemingly endless onslaught of disease, come together in Spillover — Zika, Ebola & Beyond.

The latest outbreak news from @ProMED_mail