In 1977, just before the Voyager mission launched, a committee led by astronomer Carl Sagan was working to create the Golden Record: a 12-inch gold plated copper disk that would carry messages from Earth into space. The team would assemble 115 images, sounds from nature, greetings in 55 different languages, several explanatory diagrams, a map showing our location in the universe, and a 90-minute selection of music that was intended to convey the diversity of Earth's cultures.

They wanted the music to represent the widest possible range of cultures, offer insights into each, and convey emotion. It was a daunting endeavor and time was short so Sagan and the committee—which included Golden Record producer (and former editor of Rolling Stone) Timothy Ferris, creative director Ann Druyan, technical director Frank Drake, designer Jon Lomberg and greetings organizer Linda Salzman Sagan—relied on a small group of consultants to help identify potential selections. One of them was ethnomusicologist Alan Lomax. 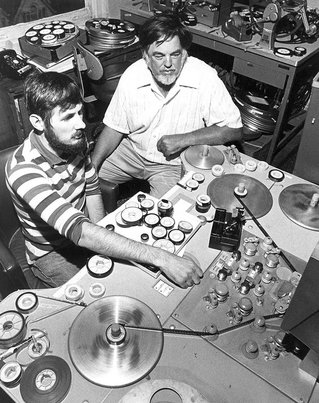 Alan Lomax and John Bishop editing film, 1970s. Lomax was a natural fit for the project. At that time, he was the director of the Cantometrics Project at Columbia University, and had spent decades working to understand, promote, and distribute the world's folk music. Cantometrics is a methodology that Lomax began developing in the 1960s to analyze how elements of a society's music connect to how it's organized and how its people express themselves. For Lomax, recording ethnic music to share with the world was a lifelong passion.

In 1934, while working with his father and fellow ethnomusicologist John Avery Lomax at the Library of Congress, he was asked to head up the expansion of the Archive of American Folk Song. The project sent him off on a journey across North America and the Caribbean to gather field recordings. He came back with thousands of them, and began to author folk song anthologies and create folk music radio programs. 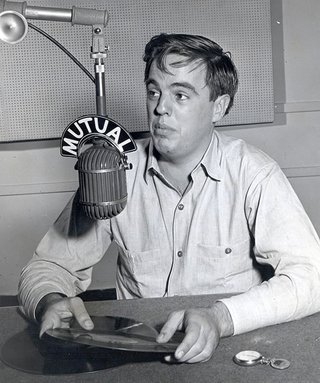 Alan Lomax at a Mutual radio studio hosting "Your Ballad Man," 1948. By 1942, he'd left the Library of Congress for a job at the Armed Forces Radio Service, where he brought American folk music to allied troops overseas during WWII. After the war, he traveled across Europe recording traditional music, and building his archive. When he returned to the states in 1958, he set about launching music festivals, producing teaching films, creating more anthologies, writing books and journal articles, and sharing his theories about the relationship between music and culture.

In 1977, when the Golden Record committee was in the midst of figuring out what music to send into space, Lomax and his team had just finished compiling some 700 pieces into an extensive anthology of world song. Needless to say, he was ready and able to offer the committee some suggestions. Lomax delivered a range of possibilities from all over the world, and the committee invited his comments and critiques as they went through the arduous and time constrained selection process. In some cases, they leaned on Lomax for source recordings, too. He helped procure Louis Armstrong's "Melancholy Blues," and after suggesting a piece called "Tchakrulo," from Georgia (part of the U.S.S.R. at the time), he helped locate a Georgian expat living in Queens to translate the lyrics. In the end, the committee chose twenty-seven pieces that they felt best represented the diversity of human life on Earth. 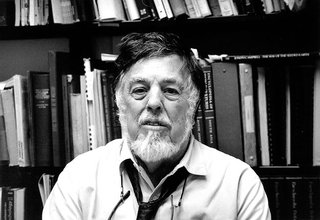 Alan Lomax at the Association for Cultural Equity, 1986. Following the launch of Voyager, Lomax envisioned a "Global Jukebox" that would make recordings from around the world available to the masses. It was an ambitious undertaking that was—prior to simple digitization techniques and wide scale streaming—ahead of its time. He passed away in 2002, before the idea was ever realized. But like much of his life's work, the project lives on. More than two decades later, the Global Jukebox is now online and contains more than 6,000 folk songs from around the world…and growing.

Lomax earned a "Living Legend" award from the Library of Congress, received the National Medal of the Arts from Ronald Reagan, and posthumously, a prestigious Grammy Trustees Award from the Recording Academy. And perhaps, one day in the very distant future, some of his Earthly suggestions for the Golden Record could give a whole new meaning to the "world" music he loved so passionately.

Photos from the Alan Lomax Collection at the American Folklife Center, Library of Congress. Courtesy of the Association for Cultural Equity.