Posted by The Great American Read Editor on

John Irving, author of A Prayer for Owen Meany, answers a few questions from The Great American Read:

What’s one book that didn’t make the list of 100 that you would add?

Moby-Dick made the list, but not the author to whom Melville dedicated that novel — Nathaniel Hawthorne. The Scarlet Letter should be required reading for Americans; it is our history, one of sexual discrimination. Two other notable American writers are missing from the list.  I would include William Maxwell’s So Long, See You Tomorrow and Edmund White’s A Boy’s Own Story.

What are you reading right now?

My reading right now, this summer, includes Michael Ondaatje’s Warlight. It is among his very best novels. I love Michael Ondaatje’s work, and I’m surprised he’s not on the list. I’m also reading the new novel by the Irish writer John Boyne, published in August — A Ladder to the Sky. I love his novels, especially The Absolutist, A History of Loneliness, and The Heart’s Invisible Furies — that one is dedicated to me. John Boyne has tattooed the last line from The World According to Garp on his arm; that’s real dedication! I should know about that; the last line of Melville’s Moby-Dick is tattooed on my left forearm.

When you’re in a book store, what section do you gravitate to and why? What’s your favorite way to read? Hardback, paperback, or tablet?

In a bookstore — no surprise — I spend my time in the Fiction section. I don’t have a preference between hardcovers and paperbacks. I like audio books, too. I don’t like reading on a screen, but I know many good readers who read that way. However people read, I just wish they would read more.

Which book character do you most relate to and why?

As for which character in a book I “most relate to and why,” there are two. One would be Abel Magwitch — the escaped convict, and Pip’s benefactor, in Great Expectations. Magwitch is thrilling — a threatening presence, a seeming force of darkness, but he has a heart. Magwitch is a criminal on the run, but he notices and tries to benefit a boy he frightens one night when he’s in a murderous state of mind.
The other is Queequeg — the cannibal harpooner who foresees his own death, and then changes his mind, in Moby-Dick. Queequeg, a tattooed savage from the South Seas, is not encumbered by Christianity, as some of his shipmates on the Pequod are. Queequeg trusts his senses; he is also a surprisingly gentle soul, especially for a cannibal. They are both minor characters who have major roles to play. 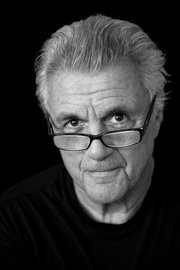 John Irving was born in Exeter, New Hampshire. His first novel, Setting Free the Bears, was published when he was twenty-six. He competed as a wrestler for twenty years, and coached wrestling until he was forty-seven. He is a member of the National Wrestling Hall of Fame in Stillwater, Oklahoma.
Mr. Irving has been nominated for a National Book Award three times—winning once, in 1980, for his novel The World According to Garp. He received an O. Henry Award in 1981 for his short story “Interior Space.” In 2000, Mr. Irving won the Oscar for Best Adapted Screenplay for The Cider House Rules.
John Irving co-owns the theatrical rights to The World According to Garp with Warner Brothers. He has written an adaptation of Garp as a teleplay—a miniseries in five episodes. He and Warner Brothers are currently in the process of finding a production and distribution partner for the Garp miniseries. Mr. Irving, who lives in Toronto, is also at work on his fifteenth novel—a ghost story called Darkness as a Bride.