The Evolution of Gender Stereotypes; The Second Debate; Adultification Bias 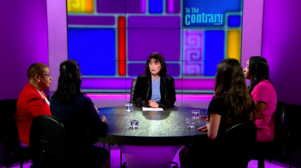 This week on To The Contrary with Bonnie Erbe, our panelists discuss a now widely accepted assumption that women are as competent as men, the six female candidates running for President, and the harsh consequences of adultification bias.

The Evolution of Gender Stereotypes

A new study from the American Psychological Association reveals that women are finally perceived as competent as men, but still lag behind in the area of agency.

Eleanor Holmes Norton: “Public perception has nothing to do with women’s wages and jobs. It is sex discrimination and sex stereotyping.”

Patrice Onwuka: “When you look at the fact that women started 1,800 businesses each day in 2017 to 2018, and the types of businesses lend themselves well to allow a lot of flexibility, where you can work from home, maybe women are not going the CEO route, but it not doesn't mean they're not ambitious.”

Anushay Hossain: “That is a key word that you just use, which is flexibility, [...] working remotely and letting women control our hours. There was actually a really big study done. CNBC did a whole thing on it, about how if you tie women to their desks, they will never be able to win that competition with men [...] We need flexible hours more, so we can get everything we need to do done.”

Tiana Lowe: “The most important thing when it comes to women's life long incomes is their own confidence. So if this does sort of have this reverberating effect of women, negotiating better wages, better salaries, or even an earlier level, committing to more rigorous degree programs that they are clearly capable of achieving. That's a net positive for society.”


Women in the Second Debate

Did any candidate put a dent in Joe Biden’s lead?

Patrice Onwuka: “I think Senator Gillibrand’s attack was very scripted. And I think that's why it fell flat. It wouldn't surprise me if she gets knocked out. But that was her Hail Mary pass and she fumbled it. And as for Tulsi Gabbard, I think it was interesting to see her really hit Kamala Harris, and really hold her accountable. And I did like that she had a great breakout moment and held another front runner accountable.”

Anushay Hossain: “I thought that the women did do a good job combined in both the debates and making Biden - who I liked very much personally, and I think he's wonderful - but I feel like he has been shown kind of outdated, old. I think Gillibrand did a good job kind of showing him that he wasn't maybe as pro-women and modern as you would think. Then Harris, the first debate, obviously made him look like he was behind on race issues. But then you see the numbers and you're like, maybe they didn't, and weren't as effective.”

Tiana Lowe: “It is important to note though, in head to head matchups, Biden is the only one who beats Trump. And there's that Quinnipiac poll that came out a couple weeks ago that shows Biden could take back Texas. Will Heard is not running for reelection. Texas is back in play. If you look at how well Beto O’Rourke did, mind you, against Ted Cruz, Texas is in play and Biden could put it back in play.”

Bonnie Erbe: “That's what makes [Biden] popular, sort of his old fashionism, if you will. The fact that he's white, the fact that he's an old guy, is appealing to who the Democrats are going to need to appeal to in the general election.”

According to researchers, black girls tend to be treated as if they were older than they actually are and are therefore more likely to be reprimanded than their white counterparts.

Eleanor Holmes Norton: “I really want to look at what it is that keeps black girls from feeling fully equal, to do what she has to do... I would look at how she's treated in school, I would forget this thing about the home, I look with what happens when she comes into the wider world and try to focus there, that's where you can get people treated equally.”

Patrice Onwuka: “I will say that there's a social angle to this. And people will not like what I say when I say this, but we often glorify videos of little girls and babies dancing, in frankly, sexualized ways because it's cute, but it's not cute...So I think there's a role for us as parents, to really be careful about what we consider cute and put out on social media.”

Anushay Hossain: “I think what's so interesting about this study is because a lot of this came up during the whole R. Kelly scandal. There were saying that the reason he didn't get prosecuted sooner or he wasn't behind bars sooner is because he was doing this with so many underage black girls and that they weren't viewed with the same kind of sympathy.”

Bonnie Erbe: “If you look at some of [R. Kelly’s] videos, and he's not the only rapper, but I mean rapper videos of black women... it's disgusting what a lot of white musicians do to white women in those videos [as well]. But when you see them basically not clothed at all and wiggling all parts of their intimates all over the place, I wonder how much that plays into it.”