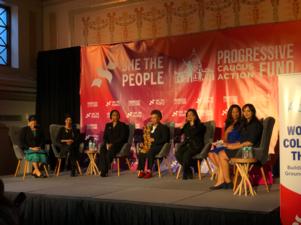 The panel at She The People and the Progressive Caucus Action Fund's event was comprised entirely of women of color, including Rep. Ilhan Omar and Rep. Ayanna Pressley.


Some of the most influential and innovative women in the world came together in Washington D.C. late last month during Fortune magazine’s annual Most Powerful Women Summit, which included notable speakers like American designer Tory Burch, Anita Hill, and even controversial figures like Kristjen Nielsen, the former United States Secretary of Homeland Security.

While most of the media coverage and conversation surrounding the summit was centered on Nielsen’s tense interview with Amna Nawaz, national correspondent for “PBS NewsHour”, perhaps it was too focused on Nielsen. Instead, maybe audience members and members of the press should have turned their attention towards questioning summit organizers about the lack of representation of women of color from the summit.

Sure, the summit did include some incredible women of color in its lineup, like Washington D.C. Mayor Muriel Bowser, and Dream Hampton, the executive producer of the documentary series “Surviving R. Kelly”. However, out of the 125 speakers listed on the summit website, only 22 percent of those scheduled speakers were women of color.
This is a step up from Fortune’s Most Powerful Women in Business list, which was published just over a month ago. Out of the 50 women included in the list, only four women of color were included.

Fortune editors use a specific methodology and criteria when it comes to deciding which CEOs will make the cut for the coveted list. The criteria is made of four points: “the size and importance of the woman’s business in the global economy, the health and direction of the business, the arc of the woman’s career, and social and cultural influence.”

Although Fortune stepped up the representation of women of color for the summit, it’s worth considering why the magazine didn’t choose to incorporate more of the women who they later invited to speak at the summit into the list. There were certainly plenty of women they could’ve chosen from, like Huda Kattan, entrepreneur and founder of the cosmetics line Huda Beauty. Kattan, a daughter of Iraqi immigrants, has developed a brand that has not only found a loyal following of 39 million Instagram users, but has also translated her followers into customers. According to reports, Huda Beauty brought in around $200 million in revenue last year.

Perhaps, Fortune should take a more holistic approach to determining who is included in its list, and invited to their summit events. If editors themselves acknowledge that women of color “remain depressingly rare in the highest of corner offices”, why would they continue to perpetuate this by using a criteria that keeps women of color off their list?
A day after Fortune wrapped up its summit, a vastly different type of event was held in the same city. For the first time ever, the Progressive Caucus Action Fund held a town hall event focused on the leadership of women of color within the progressive movement. Moderated by Versha Sharma, the managing editor and senior correspondent for NowThis,
and featuring panelists Rep. Pramila Jayapal, Rep. Ilhan Omar, Rep. Deb Haaland, Rep. Barbara Lee, and Rep. Ayanna Pressley, the panel was completely comprised of women of color.

At the event hosted by the Progressive Caucus Action Fund, women of color and the specific issues that impact them was the main topic of conversation for the two hour long event. Panelists took the time to discuss the intersections between housing, the minimum wage, healthcare, and being a woman of color. But at the Fortune Summit, there were no panels specifically targeted towards women of color and their role in the business world. Instead, there were presentations called “Beyond the Business Case for Diversity & Inclusion” and “Leading Through Cultural Change”.

While taking the time to address the role of diversity and inclusion in offices within the business industry and beyond is a step forward, summits like Fortune’s can be a better space for women of color by specifically creating panels and presentations specifically geared towards them. Creating a panel that’s focused on “diversity” is too generic for 2019.

Women of color not only deserve to see themselves represented on the glossy mainstages of summits like Fortune’s, but they also deserve to be able to listen to conversations that are specifically aimed towards addressing their fears and hopes of within the boardroom and beyond.