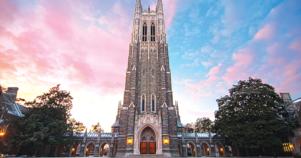 Christ is made the sure foundation, Christ the head and corner stone…

Reimagining the way the Christian Church in all its forms might benefit women, or at least welcome us and allow us to feel comfortable in its formidable edifices, raises, inevitably, the issue of language, as I was reminded by Buck Duke’s bronze plaque on the side of the Duke “chapel”—impressive as a cathedral—honoring the master stone mason who made those walls. Admirable, and unusual, as this plaque is in honoring a man who worked on the church rather than designing it, this plaque also raises the interesting question of whether this language would have seemed usable to a European stone mason whose first language was not English.

But he was a man. And although he might not have imagined himself as foundation or corner stone, he certainly knew men like Buck Duke who did, and perhaps felt some kinship through gender.

Do we women claim the same kinship and source of strength through gender—and therefore through language? Only if we have our own words.

I don’t know if the Re-Imagining Conference, held in Minneapolis more than twenty years ago, asked this question, but certainly the many speakers, primarily from the Methodist and Presbyterian churches, did. (No Episcopalians, unfortunately for me.) Reading Buck Duke’s use of words on his plaque made me wonder if these particular words—foundation, head, cornerstone—could ever be used by us as we try to create a feminist Christian consciousness and community.

We are burdened in this struggle by our human love of pageant. During the so-called ecumenical service at Westminster Abbey on September 17, 2010, the Purcell hymn in all its glory was sung by the choir while a stately procession of men—with two nuns, in humble grey, the only representatives of our gender—proceeded down the main aisle of the Abbey, creating a rousing display of white, red, and gold.

Hardly ecumenical—the Webster’s definition is “worldwide or of general intention”—the large congregation gathered for this all-male ceremony, like all congregations, was predominantly female. Even I, objecting to the whole idea of a male-led church—and to the deeply entrenched belief in God as male—found myself excited by the music, the pomp, the beautiful colors.

Had the service been truly ecumenical, would it have been led by women of all skin colors and gender definition, dressed in the robes of gypsies, fairies, queens, and martyrs? Would the colors be as glorious, the music as magnificent? And would we substitute words like womb, breasts, vagina for those that seem aggressively and eternally male?

What we are, physically, doesn’t automatically bestow authority. Even the women on the U.S. Supreme Court, dressed in their robes, are routinely interrupted during the proceedings by the male judges.

And if we are to change our Christian institutions rather than assisting them—as so many women do; the churches would not survive without our donations and out unpaid work—or beating our heads fruitlessly against those walls, we have to change, and claim, the language.

I saw this happening during the Women’s Marches when so many banners celebrated our female body parts, and pink knitted hats gloried our revolutionary vaginas.

That requires a bold re-imagining, for sure. The seat of our physical fecundity, the opening through which we receive, then give new life into the world—can that ever be re-imagined as also birthing revolution—or even changes in language?

Good morning, Bonnie and Ariel —
My apologies for not being in touch recently - we got out of sync there a little bit with weekend posts and i got out of the habit of sending them over to you when that changed.
We just posted a new piece this morning, “Re-Imagining” - you can find it here:
https://salliebingham.com/re-imagining/
To learn more about Sallie Bingham’s books and writing, please visit her website: SallieBingham.com