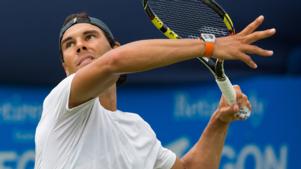 Great athletes inspire. This is not something I have always known. Rafael Nadal, third in the world’s ranking, who won the French Open match I watched on Sunday to move to the quarter-finals in Paris, is a great athlete. His somber focus, his knotted passion on the court match his somber face; this is not a man made for humor or lightness, at least when he is playing tennis. His long legs seem made to span the end of his court, his long arms swing into the serve almost as though they are independent of his body. Before each serve, or before he accepts a serve, he goes through a curious ritual which seemed at first to be a brushing of his ears and nose. After watching him go over this again and again, I realized that he was crossing himself. And the way he plays tennis seems as ritualized and as serious as a monk’s way of addressing himself to prayer.

Coming back to my hotel and writing this blog I thought of how easily dissipated my creative energy is, how easily dissipated all our creative energy is. We live for so many things: food, drink, relaxation, entertainment, friends, family, the excitement of change—like this change that has brought me to Paris as part of a trip to celebrate my granddaughter’s graduation from college. She will be distracted, too, as she steps into her first job, working for a community defense organization in Harlem. I will be and have been distracted again and again—and again.

But watching Nadal play, I saw the possibility of something else. How different was the next match between the French favorite, recovering from a back injury, Kristina Mladenovic, known to her fans as “Fifi.” Having been grounded by her injury, she is according to the French press, “dos au mur”—her back against a wall. That was not the way she appeared today, sleek and long in her green and white tennis dress, but she did fight hard to defeat the Spaniard, Garbiñe Muguruza. Her serve, her principle weapon along with a strong forearm, is still somewhat limited by her injury, which seemed to cause her to compromise the movement of her left arm when reaching up to hit her high-tossed ball. I was reminded of my tennis coach’s advice to scratch my back with my racket at this point in the serve, which Kiki seemed unable to do.

Probably this was the cause of her unusual number of double faults. But in spite of them, she won her match handily, and the audience in the big stadium went wild. Interviewed after her win, she was in tears—hardly imaginable for the grim giant, Nadal.

I don’t want to hint that her tears or her prettiness detracted somehow from her seriousness, yet I have to admit I could imagine her dressing after the match and going out for drinks with a boyfriend.

Nadal may have done that, too, but it doesn’t really fit. I see him instead going quietly home, eating a steak, and going to bed.

There are so many more matches still to come.

And I renewed my determination, as old as I am, to write better, to write more, to reach more people. And also to work on my tennis. My coach who is infinitely patient is perhaps more realistic about what I can achieve than I am. When I asked him about joining the Senior Olympics, he replied, “They’ll carry you out on a stretcher.”