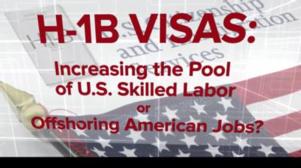 The Controversy Over H-1B Visas

“People in the U.S. are sick and tired of losing our decent jobs. We're not going to participate in a race-to-the-bottom, where working people are fighting each other all across the world to see who can be exploited the most,” - Jelger Kalmijn, President of The University of Professional and Technical Employees of the Communications Workers of America

“The worst abuses come in the form of quality of life. When your life is controlled by your employer to an extent that you can’t travel outside your country, you can’t even go to your parents funeral, you can’t change jobs and you’re sometimes even forced to work overtime 16 hours, but you will only be paid for 8 hours.” - Aman Kapoor, Founder of Immigration Voice

"A lot of business’ are bringing in H-1B visas, not because they can’t find American workers but because the H-1B workers are both cheaper and they’re indentured." - Ron Hira, Associate Professor Howard University

"One of the things that the American company does is say stay, apply, we are going to have other job openings that you are going to qualify to do and apply for them - which they do.  The Americans apply for them. They don’t exist it is just a trick to keep them there to motivate them to continue to train." -Sara Blackwell, Attorney & Advocate, Protect US Workers