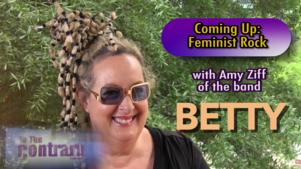 She talks about her music and the social effect of feminist rock. Known for providing songs for HBO's Encyclopedia and performing the theme for The L Word on Showtime, BETTY has been playing for over 30 years. Amid the discussion, we hear snippets from BETTY's new CD, On the Rocks, and catch glimpses of their live performances.

Some quotes from the show!

On their role in making change happen:

"If you are willing and able to work for a good change, hopefully we're entertaining you along the way"

On their new song "Rise":

"If you can't have music for your revolution, how can you dance?"

On their new song "Make a Difference":

Responding to people who say feminists are not funny:

"Anyone who says feminism is devoid of humor is just [expressing] some kind of crazy, trumped-up misogyny."

On being an independent band for 30 years:

"We've been below the radar, and sometimes aside from the main radar."

On the importance of music when it comes to social change:

"In the moments you feel bleak, if you listen to a song or see a beautiful painting... it propels you forward"