Millennial Voices: Malala Yousafzai, a Humanitarian, a Hero, and a Wonk 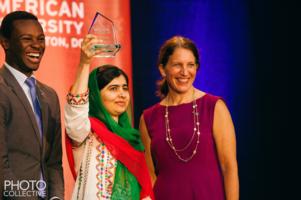 Crowds of American University students, faculty, and alumni gathered into the tightly packed Bender Arena gymnasium waiting for Nobel Peace Prize winner Malala Yousafzai. She was there to accept AU’s Wonk of the Year award. She’s the 4th person to receive the award, which is presented to someone, who has demonstrated engagement, passion, and determination in their field.

You could feel an array of emotions in the arena. Students were tearing up and there were screams of exhilaration as Yousafzai graced the stage greeting the audience with “As-salamu alaykum”, an Arabic greeting meaning “peace be upon you”.

The world first learned about Yousafzai and her activism after she was shot by a masked Taliban gunman on a school bus. In her native Pakistan, the 15 year old was already known for speaking out about her belief that all girls deserve an education. This near death experience propelled her onto the world stage as an advocate for girls’ education and gender equity. When briefly speaking of the shooting, she proclaimed, “the terrorist had made a big mistake.” She’s no longer terrified of what might happen to her. The experience made her more profoundly determined to fight for girls’ education and equality. Nothing was going to stop her.

Yousafzai also provided a run-down of some of her activities outside of her studies at Oxford University. She has been campaigning for girls’ education for the past 4 to 5 years focusing on advocacy, investment, and empowerment. She’s calling for an increase in support for young girls, refugee kids, and displaced kids where they are ensured 12 years of quality education.

She also invests in local advocates and leaders through a project called Gul Makai Network. Gul Makai was her pen name when she was blogging for BBC, but wanted to protect her identity from the Taliban. The project empowers local leaders so they can bring change to their communities. Lastly, she uses her platform as a globally known leader to empower young girls through the Malala Fund, a foundation she started with her father that grants girls’ the opportunity to 12 years of education. She says she has her father to thank for allowing her to speak, since most families in her culture don’t permit girls to speak out.

“Girls can do anything. Women can do anything. They just need to be given the opportunity,” Malala Yousafzai told the audience. Once again, the crowd burst into a united uproar, most of them cheering and screaming at the top of their lungs.

AU President Sylvia Burwell moderated the Q&A session. All the questions came from AU students. Lauren Beeslee, a senior studying political science asked whether we are on the right track to getting girls worldwide into school.

Yousafzai began by answering Beeslee’s question saying concerns about whether or not girls are on the right track towards education is always on her mind.

“I came to New York. I spoke at the UN General Assembly to remind leaders to be on the right track, to remind them of the promises they made two years ago. But, unfortunately, their investment in girls’ education has either been the same or it has been decreasing,” said Yousafzai.

Yousafzai’s message to the members of the UN was to keep their promise and increase support for girls’ education, specifically secondary education because this is when the dropout rate is highest for girls.

Malala Yousafzai, a humanitarian and a hero, is a constant reminder that education is a gift we are all granted. As she concluded her speech, she addressed AU students specifically:

“You all are lucky to study in such a prestigious institution where you can achieve your dreams and learn and have such a blessing to gain knowledge.”