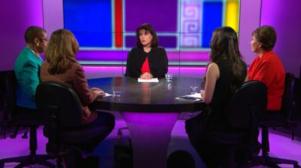 This week on To The Contrary with Bonnie Erbe, our panelists discuss the growing number of female politicians running for president, a new push towards ratifying the ERA, and women in selective service: should women be forced to join the draft?

The majority of declared presidential candidates are women. What role will women play in 2020?

A new push to pass the Equal Rights Amendment to the Constitution.

A new Congressional commission is evaluating whether women should be a part of the selective service.