Millennial Voices: The ERA is the Future 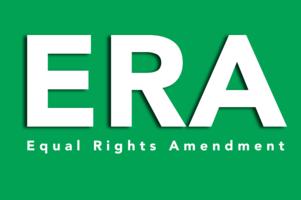 The counter argument against the Equal Rights Amendment is that in 2019, women truly have equal rights in America. Sure, women are climbing ladders and finding success in careers across industries. We have access to certain aspects of healthcare and the right to vote, but America has still fallen short in many contexts. While those were all extremely important wins in the suffragists’ movement, women are not treated equally. That idea is baloney.

Acknowledging women’s progress thus far is imperative. But if we stop there, we’re virtually erasing all suffragists’ strenuous, dedicated efforts. What the Equal Rights Amendment offers in representation and legality is far beyond what current laws can provide for women. Who are we to say, “Hm, let’s just stay comfortable in this current climate of half-respect, half-equality, half-mumbo-jumbo mess,” instead of pushing and striving further to better the lives of women of all colors and social classes? Going “halfsies” is frankly foolish.

Those in opposition might argue the ERA would merely duplicate the 14th Amendment and give the federal government more power. But those statements really just twist what the amendment would actually do. The 14th Amendment only mentions “males” in its wording, and the Supreme Court has declined to elevate sex discrimination to the same standard of review given to cases of discrimination pertaining to race, religion, and national origin. That means that in sex discrimination court cases, there is no guarantee that justice will be served on the means of gender. Opposers are highly concerned that the ERA would give women the right to abortions nationwide, whereas that right is currently on a state-to-state basis. But it doesn’t only cover abortion… the amendment is about more than that; it’s about women’s overall healthcare. And this is only a portion of why they think the ERA is “evil.”

On another note, how do you assess your level of ease when walking down the sidewalk or in a parking lot in the dead of night? A Gallup poll revealed that in 2018, 36% of women compared to 4% of men worry about being a victim of sexual assault. That’s one in three U.S. women that fear being raped and harrased from the simple task of walking home or walking to the store.

I rarely am able to casually walk on the sidewalk at any time of day without being verbally and/or physically harassed by men. I am constantly hyper-aware of my surroundings and limit my phone time, unless I am purposefully talking on the phone to avoid confrontation. I also wearily keep my keys or pepper spray in hand, in case the worst were to happen. Living in perpetual uneasiness about my personal well-being, while men have no problem strolling out alone at night, is far from the definition of equality I know.

This asymmetrical level of safety and security does not just occur on the streets. Workplace impropriety is still a problem. Regardless of what I wear or how modest I attempt to make myself look, I have still been preyed on by grimy men, old and young. The lack of workplace etiquette and professionalism astounds me. Seven in ten Americans said that “sexual harassment in workplaces [was] a ‘major problem’ in 2018,” a Gallup study found. That's a 50% increase from data found in 1998. Utterly outrageous.

Actions in a professional environment go far beyond unsought sexual advances. As soon as I became of age and started going to the doctor alone, the atmosphere in the doctor’s office shifted drastically. I have been declined attention to concerns about pains or discomforts I face with my body multiple times, because my OBGYN and even my general health practitioner (both family doctors) don’t believe that anything is amiss, because they think they know me. The number of times that I have been denied testing, or have had to ask multiple times, practically begging to be seen by specialists, is disgraceful.

According to National Geographic, maternal mortality rates have increased in the U.S. since 1990 and we are one of two countries in the world where death rates among women have increased. And while I have never experienced a doctor-patient relationship regarding pregnancy, the idea that doctors still are not listening to women, about anything medically, is appalling.

What does all of this have to do with the Equal Rights Amendment? Well, as previously mentioned, the amendment would prevent sex discrimination in federal courts and in a domino effect, would prevent sex discrimination in the workplace, doctor’s offices and even on the streets. The ERA would give women guaranteed reproductive rights across the nation rather than reproductive rights on a state-by-state basis. It could prevent courts from discriminating or ignoring rights in Title VII and IX cases and surpass representation that those laws do not cover.

The ERA is a necessary tool for the future of women. By making women and men equal, income for the working class would not be based on gender, but by skills and qualifications. It would give women a voice, a vessel to let others know that women matter. That we aren’t just a piece of meat that can be objectified, and we deserve to be taken seriously and respected from the start.

If you care about the #WomensWave, or the #MeToo movement, then you should care about the Equal Rights Amendment as well. Why should we accept our current societal situation rather than push harder for even better lives? We can celebrate our triumphs by continuing to strive for greatness. Really, if we don’t keep working to better the lives of women in America, then we do an injustice to all of the women who came before us that advocated on women’s behalf to make our lives the way they are today. Without them we would not live with the freedoms we tend to take for granted, and without our efforts, our daughters and granddaughters— the future for all women — will not experience those same freedoms or any of the greater impact.

And even if you are in favor of the March for Life or other right-wing movements, the Equal Rights Amendment should still be marked “Yes” in your checklist of laws to be ratified. This is not a matter of left or right ideologies, it’s a matter justice for women.

It’s a matter for women to have control over our own careers, bodies and well-being. At a record high, Gallup found that 56% of women in the U.S. in 2019 are dissatisfied with how women are being treated in America’s society. Why let men continue to do our bidding for us when we have the power to change our own lives? Make an effort, call your senator, tell your friends. Ratifying the ERA is not looking a gift horse in the mouth. It is quite the opposite. It’s taking a part of a gift that we have been granted and nourishing it to grow into something even greater for women. You and I, we are the future. We can make a change. We can break the glass ceiling of patriarchy and show the world that women matter, that women are the future.