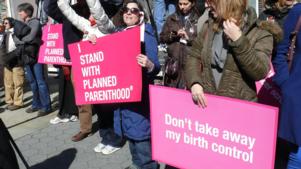 
It’s 2019 and women still aren’t guaranteed the unalienable right to make decisions for themselves, for their own bodies. What is so hard about acknowledging basic medical needs and moral equality for women? Do old, unruly male lawmakers wake up every morning and think to themselves, “What am I going to do today to make a woman’s life just a little bit harder?”

The Trump administration is pushing fervently to defund Planned Parenthood all because of one single medical practice they offer. Politicians, and in this case, Trump, look at Planned Parenthood and rather than see all of the good, beneficial services they provide women, they only see “ABORTION” in flashing red neon lights like it’s plastered on a billboard advertising infanticide. But these clinics are not demonic baby killing institutions. And anyone who thinks that should do some serious research into what actually goes on behind those doors.


The organization offers a plethora of clinical resources that have absolutely nothing to do with abortion, like cancer screenings, STD and HIV testing, prenatal care, PAP tests, condoms, birth control and. so. much. more. By taking away funds for one small function Planned Parenthood offers, the administration is limiting access for everything else that patients seek in those clinics. Planned Parenthood explains, literally, 2.4 million citizens will lose access to healthcare. Let me repeat that— 2.4 million citizens will lose access to healthcare. And in case you forgot, that includes the LGBTQIA+ community and women alike.


The answer to solving all of the polarization and anguish on Capitol Hill is right in front of everyone’s eyes. Give women, give trans, give everyone their rights; the integrity to attain the healthcare that is justly theirs. Yes, I mean every service and every screening provided by Planned Parenthood, and then the United States won’t be in such a messy war with itself about what anyone who isn’t born male gets to do with their own bodies. This issue of denial is not just honed in on one specific group, it involves a much bigger faction of the U.S. population that deals with race, ethnicity, and religion.


One major issue politicians fail to do is separate their all high and mighty Church from the State. What happened to legislation created for the people, not for the Bible? We’ve begun a downward spiral into decisions made by men about women’s bodies, solely based on what religious agenda they decide to abuse for the sake of fame. Politicians preach political sermons by quoting scriptures like Psalm 139:13-16 or Isaiah 49:15 but fail to accurately depict an argument with evidence other than on the basis of a book. They ignore the truth of science and spit fallacies rather than principles, and that has to change.


No Mr.Politician, you don’t want to improve women’s lives, you just want your name on the front page of your local paper. Your religious background should not influence your legal decisions for this country. Religion often times doesn’t even make a difference for people in the case of women’s health. In fact, according to a poll in 2018 from the Guttmacher Institute, more than half of women who had an abortion in 2014 identified as Protestant or Catholic. So what does that tell you about faith in women’s choices?


The legalization of abortion in the U.S. did not lead to an increase in abortion as one might conclude, given pro-life rhetoric. Abortions actually declined; in that same study, the Guttmacher Institute found a 12% decrease in abortions between 2011 and 2014. One phenomenon that greatly impacted that decline, was, you guessed it, the increase in access to contraceptives.


Planned Parenthood points to a Guttmacher Institute study conducted in 2014 which found, “Between 1990 and 2010, the national teen pregnancy rate fell 51 percent to its lowest level in nearly 40 years.” While that number is great, there are still challenges to accessing contraceptives. To accessing everything really. Out of the 46 states in the U.S. that have refusal statutes against abortion in their legislation, 13 of the states, like Arizona, Florida, and Mississippi prevent provisions for both abortion and contraceptives, according to Planned Parenthood. It’s like a double whammy that gives women nowhere to turn.


Given the Trump administration’s efforts to defund Planned Parenthood, one may ask, why can’t other healthcare providers take in patients that have been displaced from the loss of Planned Parenthood? It’s not that simple. There’s little to no room for other clinics to absorb 2.4 million patients. The patients would have no place to go.


If that is not enough, the Trump administration’s enabling of the “gag rule” under Title X will completely derail the relationship between doctors and patients. Title X is the federal grant program under which Planned Parenthood gets its funding. The “gag rule”, if enacted, will prevent practitioners from telling patients where they can go to get a safe and legal abortion. It’s as if they purposefully want women to turn back in time to seek out harmful and sometimes even deadly tactics like coat hanger and chemical self-induced abortions, just so they can accuse them of illegal activity and diabolize their actions. History has shown the dangers and horrors of the DIY abortion.


Not to mention the repercussions of denying the acquisition of contraceptives like birth control pills or shots to women. “The number of women who complete four or more years of college is six times what it was before birth control became legal.”, stated by the Department of Education. Women are now more than ever, becoming major contributors to the economic, educational and social atmospheres that make up this society, and that is all due to the increase in access to birth control, not the limitation of it.


With an increase in the attainability of STD screenings, cancer screenings, prenatal care, and numerous other services, women have become healthier and have been able to more effectively prevent the risks associated with spreading diseases and reducing the risk of having ovarian cancer and pregnancy-related issues, states Planned Parenthood.


So I ask, Mr.Politician, why would you want America to go back to a time where women are frightened and embarrassed about abortions because you believe it is a good idea to deny their access? Why would you want to go back to a time where women get pregnant earlier on in life and lose out on the opportunities to gain a higher education, achieve career goals and bring the bread home? Where women are uninformed about their bodies and go day-by-day taking risks they aren’t aware they’re taking because they can’t obtain the resources to find out vital information to potentially save their lives, and maybe even your life?


If women do not have the choice to legal and safe abortions, without a doubt, they will turn to unsafe and often fatal alternatives. If women do not have access to birth control, without a doubt, there will be fewer college graduates and fewer positions filled in any booming industry that adds to the economic flourishment of this country. If women do not have the ability to get tested and screened for various health concerns, the quality of well-being for women will decline immensely. This will become a major health crisis— AGAIN. This will become a male-dominated world— AGAIN. And that is utterly unacceptable. Make the choice to let women choose.