Why Does Sexual Assault in the Military Persist?

Raise your hand if you, like me, have a hard time understanding why the military seems powerless to end sexual assault within its ranks.

This week, its efforts to obliterate sexual assaults on female personnel reached an unbelievable nadir. The Air Force officer appointed to lead his branch's Sexual Assault and Prevention and Response unit was charged with sexual battery. Lt. Col. Jeffrey Krusinski allegedly groped a woman in a parking lot (the majority of assaults are against women, though some men are persecuted, too). Is there no way to screen for this type of behavior? One way might be to appoint women to run such units.
Either Air Force brass didn't have the common sense to make this seemingly logical move, or didn't believe they had a woman on hand who could carry out the job. Instead they created a disastrous situation.
Read More »

Former U.S. Supreme Court Justice Sandra Day O'Connor rocked the world this week when she admitted to the Chicago Tribune that the Justices probably should have not have agreed to decide the now-infamous Bush v. Gore case. That case put George W. Bush in the White House and brought us, among other debacles, the Iraq War.

O'Connor told the Tribune: "Maybe the court should have said, 'We're not going to take it, goodbye.'" 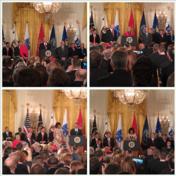 Joining Forces is First Lady Michelle Obama and Dr. Jill Biden’s program designed to help servicemen and women transition back into the workforce.  It has already hired or trained 290,000 veterans, almost tripling the original goal of hiring 100,000 veterans by 2013. Dr. Jill Biden helped the First Lady set it up 2 years ago. One thing Joining Forces does is streamline the time it takes to become a licensed professional.  Thirteen states have passed laws to do the same thing.