'Constitution USA': The Most Important TV Program You'll See All Year: "Now more than ever, with the country so sharply divided on so many important matters and our federal government accomplishing almost nothing at all, Sagal’s straightforward approach to explaining what the government under the Constitution can and cannot do for us and to us is essential viewing. Fortunately, Sagal has managed to take what could have been yet another boring series filled with still images and talking-head lectures and instead pumped it full of humor, heart and thoughtful contemporary energy." - Ed Martin, MEDIA POST.COM

Peter Sagal's 'Constitution USA' hits the road with humor: "Constitution USA provides an inkspot of sly humor and a quill's worth of good-for-you education. …the show illuminates its point less by infographics and somber talking heads — though there is a dollop of that too — than by finding colorful people whose stories illuminate the issues. Ultimately the goal is to explain cases such as 1803's Marbury vs. Madison (which, if it's been awhile since your last Con Law lesson, established the principle of judicial review) to Brown vs. Board of Education (the 1954 case overturning segregation) and Wickard vs. Filburn (the 1942 ruling that allowed the federal government to regulate economic activity). But it seeks to do that with a degree of human drama and idiosyncrasy."- Steven Zeitchik, Los Angeles Times

Peter Sagal hits the road in a Harley to see the Constitution in action: “A documentary on the U.S. Constitution easily could turn into the television equivalent of Ambien… The makers of 'Constitution USA with Peter Sagal' are acutely aware of the glazed-over-eyes effect that can come with a documentary about these four pieces of parchment paper, an 'owner’s manual for a new nation' ratified 225 years ago next month. That’s why the new PBS series went to great lengths to dodge the boredom bullet.

"Producers combined snappy graphics, clever animation and archival footage with a Harvard-educated host who cruises around the country on a Harley-Davidson, talking to ordinary Americans caught up in modern-day constitutional debates. Twin Cities Public Television and Insignia Films have managed to jazz up the documentary without dumbing it down, creating a kind of sophisticated, “Schoolhouse Rock!” civics lesson about this uniquely American blueprint for government.” - Lori Rackl, Chicago Sun-Times

The Philosophical Rumble of That Living Document: “The series, despite that motorcycle footage, leaves you with a renewed appreciation of the Constitution and its language, so presciently chosen, as if the founders could somehow see that we would need a defining document that was flexible enough to be applied to school desegregation and the Internet.” - Neil Genzlinger, The New York Times

“This fascinating series… explores the relevance of the Constitution in modern America on everyday Americans.” - Sarah Rodman, The Boston Globe

“With its clear and playful mind and keen eye for the telling example, ‘Constitution USA’ is just that explainer, TV's answer to massive open online courses. - Steve Johnson, Chicago Tribune

“Sagal reminds us how vibrant the document is” - Jacqueline Cutler, zap2It

“…A PBS documentary series that teaches us about the Constitution in a surprisingly entertaining way….’Constitution USA’…leads us through issues and conflicts with a great deal of charm.” - Scott D. Pierce, The Salt Lake Tribune

“… Peter Sagal… rode around…to investigate the Constitution in modern America. And the first leg of his journey was surprisingly good.” - Julia Shaw, The Foundry

“PBS deserves kudos for putting together an upbeat and accessible series on material that’s too often treated as arcane.” - Constitutional Accountability Center

“PBS is running a dynamic, interesting, and accessible series about the US Constitution.” - KFTC.com 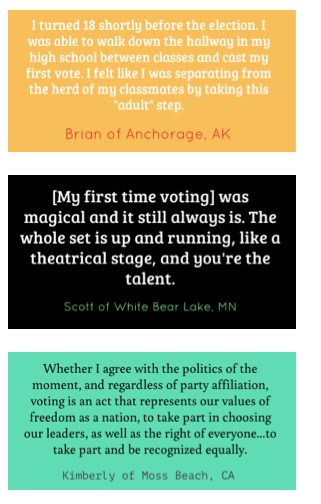