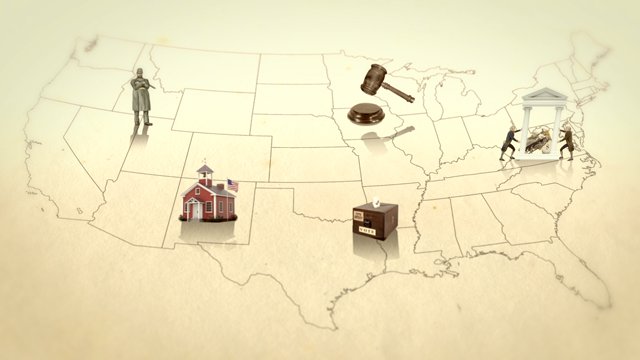 The most broad-ranging power of the federal government has become the Commerce Clause.  This part of Article I, Section 8 allows Congress “to regulate commerce with foreign nations and among the several states,” known as interstate commerce.  During the early 1900s, as part of the Progressive Era, the Supreme Court limited the power of Congress to regulate interstate commerce.  Specifically, the Court struck down a proposed law to ban child labor as part of interstate commerce.  Because states could set varying ages at which children were allowed to work, Congress wanted to create a national standard that would put all states on the same playing field.  But the Court ruled that the child labor law was not really about commerce, but regulating social conditions of labor.  This decision, Hammer v. Dagenhart (1918), interpreted the Commerce Power very narrowly.

But during the Great Depression and the New Deal, the Court reversed itself and supported more federal power to regulate the economy.  In United States v. Darby Lumber Company (1941), the Court upheld a national law regulating child labor.  And in Wickard v. Filburn (1942), the Court held that even when a farmer grew wheat on his own land to feed his own livestock, that affected interstate wheat prices and was subject to regulation by Congress.  In the 1990s, the Court once again limited the power of Congress to pass broad laws using the commerce power, especially if they burdened state officials.  That tension between the states and the federal government over the proper extent of the Commerce Clause remains today.

One of the biggest tests of the scope of federal power was the Patient Protection and Affordable Care Act of 2010, a healthcare reform bill also known as “Obamacare.”  It contained a mandate that required Americans who did not have health insurance to purchase private plans if they were not covered under a government program.  The federal government had never before compelled citizens to buy any product or service.  The Supreme Court reviewed the constitutionality of Obamacare in National Federation of Independent Business v. Sebelius (2012).  The Court ruled that the Commerce Clause allowed Congress to “regulate” interstate commerce, but not force citizens to participate in commerce by purchasing a product they did not want.  However, the Court also ruled that the insurance mandate was essentially a form of tax that Congress did have the power to pass.