“Who goes? And who gets left behind?” 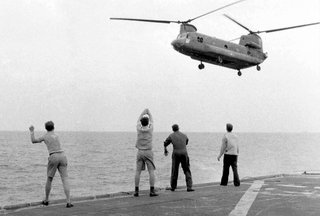 Aboard the USS Kirk, crew members signal the Chinook to hover over the deck and drop its passengers out on April 29, 1975.Courtesy of Hugh Doyle During the chaotic final days of the Vietnam War, as the North Vietnamese Army closed in on Saigon, the South Vietnamese resistance crumbled. The United States had only a skeleton crew of diplomats and military operatives still in the country. With a communist victory inevitable and the U.S. readying to withdraw, many Americans on the ground worried their South Vietnamese allies and friends faced imprisonment or death at the hands of the approaching North Vietnamese. With the clock ticking and the city under fire, a number of heroic Americans took matters into their own hands, engaging in unsanctioned and often makeshift operations in a desperate effort to save as many South Vietnamese as possible. Last Days in Vietnam airs in conjunction with the fortieth anniversary of the evacuation.

American Experience
Last Days in Vietnam
Approximately 5,000 Americans remained with roughly 24 hours to get out. Watch thru May 29, 2015.