"I want to believe that gender would not factor in to national security, whether it's weapons of mass destruction or terrorism." – Valerie Plame, former covert CIA operations officer 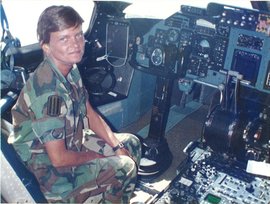 Linda Bray, the first woman to lead troops into battle, sits in a cockpit.MAKERS In this episode of MAKERS, follow the history of American women’s participation in war — from Vietnam to the present — as nurses, soldiers, journalists, diplomats and spies. Featured stories include those of Linda Bray (pictured left), the first woman to lead troops into battle, and Valerie Plame Wilson, whose career was sabotaged after she was “outed” as a high-level spy. MAKERS: Women in War shares the stories of military leaders who have broken through gender barriers.

MAKERS: Women in War premiered on television Tuesday, October 21, 2014. Watch the film below, and visit MAKERS for bonus interviews and resources.

Pat Foote discusses her career and the integration of women into the U.S. Army.

Valerie Plame Wilson's career was sabotaged after she was “outed” as a high-level spy.