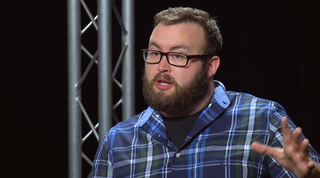 Combat Vet Mark CombsCombat veteran Mark Combs puts a face on veteran suicide statistics by interviewing West Virginia vets who have attempted to kill themselves. He talks about their deployments, their experiences attempting to reintegrate, their attempts to get help, and what could be done to make things better for veterans.

Twenty-two vets a day die from suicide.  That number is an estimate based on only half the states reporting suicide statistics to the Veterans' Administration from 1999 to 2010.  The Washington Post conducted an extensive, nationwide poll of Iraq and Afghanistan veterans in the spring of 2014.  Half of the vets who served said they know a fellow service member who has attempted or committed suicide. The New York Times ran articles on veteran suicide in September and December of 2015.  They found that the suicide rate is actually increasing, and the Department of Defense and Veterans Affairs were at a loss to explain why.

But statistics are only a number, and Combs thought what was needed was a show where vets talk about suicide, not another study.  Combs wanted to put a face on these statistics.  He asked his West Virginia vet friends who had tried to kill themselves if they would be willing to talk about it for TV cameras.  They said yes.  "Still Taking Casualities" became that show.