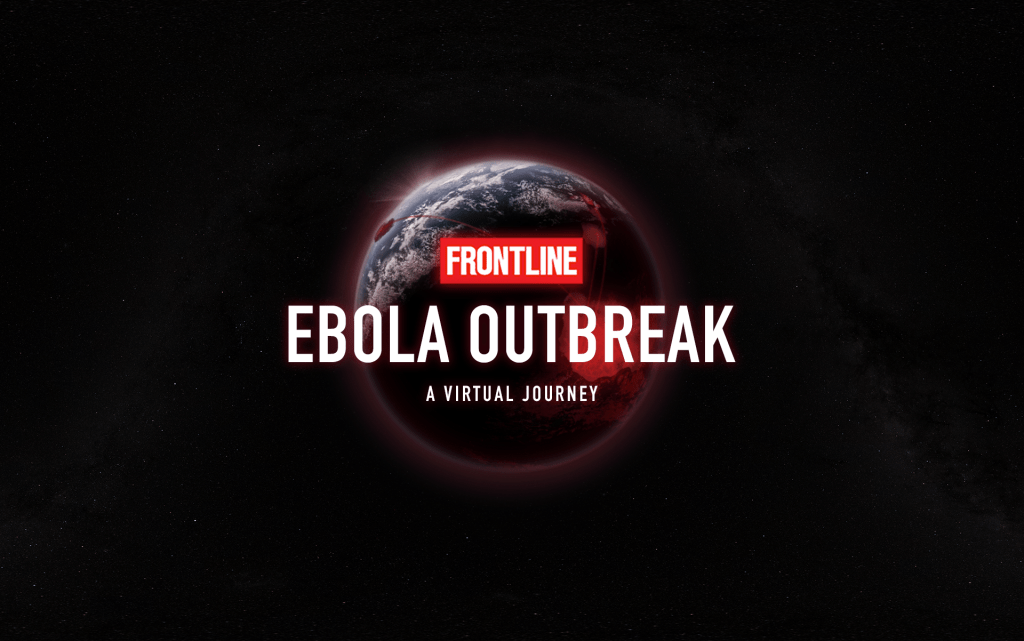 Ebola Outbreak: A Virtual Journey is a collaborative project with Columbia University’s Tow Center for Digital Journalism and Secret Location

Filmed in West Africa on 360-degree cameras, Ebola Outbreak: A Virtual Journey is a collaboration between FRONTLINE, Columbia University’s Tow Center for Digital Journalism, and Secret Location, a content studio for emerging platforms.

“For some time now, we’ve been interested in virtual reality’s promise and potential for journalism — but we haven’t seen this approach applied often in the current affairs space,” says FRONTLINE executive producer Raney Aronson-Rath, who has been recognized widely for her work to innovate the documentary form.

The documentary, from FRONTLINE filmmaker Dan Edge, unfolds in three parts: first, it places viewers in Meliandou Village, Guinea, at the hollow tree once home to hundreds of bats where villagers believe the outbreak may have begun. Then, viewers travel to Sierra Leone as the outbreak spreads and a beloved healer’s funeral sets off a chain reaction of infections. Finally, viewers visit an emergency Ebola field hospital as the outbreak spirals out of control.

“By experimenting with this technology to put viewers at the epicenter of the worst Ebola outbreak on record, we’re exploring whether the VR journalism experience immerses our audience in this story in a way we couldn’t before,” adds Aronson-Rath, who began working on this project as a 2014 MIT Open Doc Fellow.

Ebola Outbreak: A Virtual Journey will launch on Google Cardboard at Google’s Midway Booth at the ONA15 conference in Los Angeles, Calif. on Saturday, Sept. 26 from 1-3 p.m. (PST). Aronson-Rath and James Milward, executive producer and founder of Secret Location, will be available for a live demo of the project and questions; Tow Center’s Director Emily Bell and Research Director Claire Wardle will also be at the launch.

“This project creates the opportunity to actually experience the places and individuals that were affected by Ebola, while also enabling a realistic understanding of its scale and distance,” says Milward. “We believe this is a unique opportunity to create both understanding and at the same time visceral empathy by putting viewers ‘in’ the story at a fundamental level.”

“The lessons from this innovative project will be published for the journalism industry as a new Tow Center report,” says Tow Center Fellow Fergus Pitt. “It’s a fascinating, valuable case study of how to tell stories in this new medium and how two brilliant teams collaborated.”

“There is an emerging research conversation about how virtual reality changes the viewers’ relationship with subjects, events, and the lives of others,” adds Taylor Owen, former research director at The Tow Center for Digital Journalism and an assistant professor of Global Studies and Digital Media at the University of British Columbia. “This project and report are a first step in applying this potential to journalism. We feel strongly that VR will be an important medium for journalistic storytelling. This is just the beginning.”

FRONTLINE is also working on a second virtual reality documentary on the famine in South Sudan with the Brown Institute of Columbia and Stanford Universities.

ABOUT FRONTLINE
FRONTLINE, U.S. television’s longest running investigative documentary series, explores the issues of our times through powerful storytelling. FRONTLINE has won every major journalism and broadcasting award, including 69 Emmy Awards and 17 Peabody Awards. Visit pbs.org/frontline and follow us on Twitter, Facebook, Instagram, YouTube, Tumblr and Google+ to learn more. Founded by David Fanning in 1983, FRONTLINE is produced by WGBH Boston and is broadcast nationwide on PBS. Funding for FRONTLINE is provided through the support of PBS viewers and by the Corporation for Public Broadcasting. Major funding for FRONTLINE is provided by The John D. and Catherine T. MacArthur Foundation. Additional funding is provided by the Park Foundation, the John and Helen Glessner Family Trust, the Ford Foundation, the Wyncote Foundation, and the FRONTLINE Journalism Fund with major support from Jon and Jo Ann Hagler on behalf of the Jon L. Hagler Foundation.

ABOUT THE TOW CENTER FOR DIGITAL JOURNALISM
The Tow Center for Digital Journalism operates as an institute within Columbia University’s Graduate School of Journalism. Established in 2010, the Center serves as a research and development center for practitioners working at the intersection of journalism and technology. Ebola Outbreak: A Virtual Journey is supported by the John S. and James. L Knight Foundation and the Knight Foundation Prototype Fund.