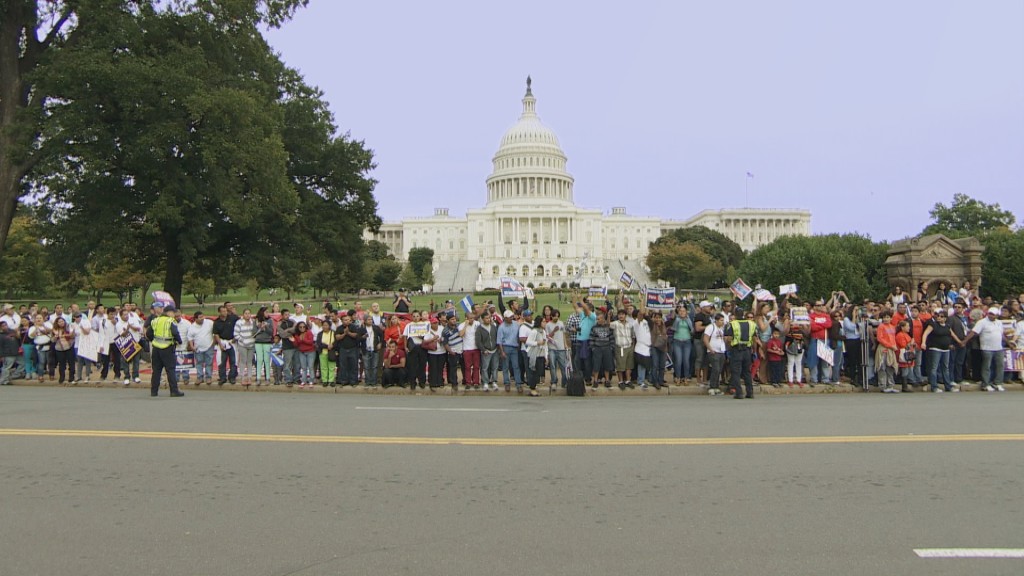 Why has it been so hard for Washington to fix our country’s broken immigration system?

Robertson and Camerini have been chroniclin­g the debate over America’s 11 million undocumented immigrants for the past 15 years, including in the acclaimed series How Democracy Works Now.

In Immigration Battle, they reveal the untold story of the push for bipartisan immigration reform after President Obama’s reelection, gaining rare access to Democrats and Republicans throughout 2013 and 2014 as they secretly worked across the aisle to try to make a comprehensive bill a reality.

The film is a fly-on-the-wall look at the high-stakes effort to broker a deal in Congress — an effort led by Rep. Luis Gutiérrez (D-IL), a mover and shaker who makes his party nervous because he’s seen by some as being more loyal to immigrants than Democrats. Immigration Battle follows Gutiérrez as he leads the movement on the outside, and secretly negotiates across the aisle on the inside.

His commitment is “always to put the immigrant community and the civil rights movement ahead of partisan politics,” says Gutiérrez, who strategizes with Rep. Mario Díaz-Balart (R-FL) and others about how to build support across party lines.

In addition to Gutiérrez, Díaz-Balart and their staffs, we meet Rep. Mick Mulvaney (R-SC) — a Tea Party member who communicates with his Spanish-speaking constituents in their own language, and who chastises members of his party for taking a political approach that “takes the entire Latino community and writes them off.”

Immigration Battle chronicles this constellation of politicians from January 2013 onward as they work to make the case for immigration reform against looming deadlines and political minefields. The film reveals just how close Congress really came to passing a bipartisan immigration reform bill, before President Obama’s executive action in November of 2014 redrew the battle lines.

Complete with deal-making over secret dinners, walk-and-talk hallway negotiations right out of The West Wing, and dramatic highs and lows, the film is an unforgettable window into modern policymaking.

And with political dialogue around immigration more polarized than ever in the runup to the 2016 presidential election, Immigration Battle is a powerful piece of context for an ongoing national fight.

A festival version of Immigration Battle debuts at the New York Film Festival on Thursday, October 8 at 6 p.m. and Friday, October 9 at 9:15 p.m. For more information, visit http://www.filmlinc.org/nyff2015/films/immigration-battle/

About Shari Robertson and Michael Camerini

Directing and producing team Shari Robertson and Michael Camerini have made prize-winning documentaries on a broad range of subjects in several dozen countries, earning praise for bringing a new and provocative approach to examining emotional and difficult subjects embedded in public policy debates. Their acclaimed independent films have included festival hits like Well-Founded Fear, which candidly explored the proceedings behind the American political asylum system; a live broadcast from the rainforest canopy in Belize for The Jason Project; and in-depth projects on the developing world, like These Girls Are Missing and the PBS series Local Heroes, Global Change. They live in New York City, where their non-profit production company, The Epidavros Project, Inc., is based.

FRONTLINE, U.S. television’s longest running investigative documentary series, explores the issues of our times through powerful storytelling. FRONTLINE has won every major journalism and broadcasting award, including 75 Emmy Awards and 17 Peabody Awards. Visit pbs.org/frontline and follow us on Twitter, Facebook, Instagram, YouTube, Tumblr and Google+ to learn more. Founded by David Fanning in 1983, FRONTLINE is produced by WGBH Boston and is broadcast nationwide on PBS. Funding for FRONTLINE is provided through the support of PBS viewers and by the Corporation for Public Broadcasting. Major funding for FRONTLINE is provided by The John D. and Catherine T. MacArthur Foundation. Additional funding is provided by the Park Foundation, the John and Helen Glessner Family Trust, the Ford Foundation, the Wyncote Foundation, and the FRONTLINE Journalism Fund with major support from Jon and Jo Ann Hagler on behalf of the Jon L. Hagler Foundation.

INDEPENDENT LENS is an Emmy® Award-winning weekly series airing on PBS Monday nights at 10 p.m. The acclaimed series features documentaries united by the creative freedom, artistic achievement, and unflinching visions of independent filmmakers. Presented by Independent Television Service, the series is funded by the Corporation for Public Broadcasting, a private corporation funded by the American people, with additional funding from PBS and the John D. and Catherine T. MacArthur Foundation. For more visit pbs.org/independentlens. Join the conversation: facebook.com/independentlens and on Twitter @IndependentLens.