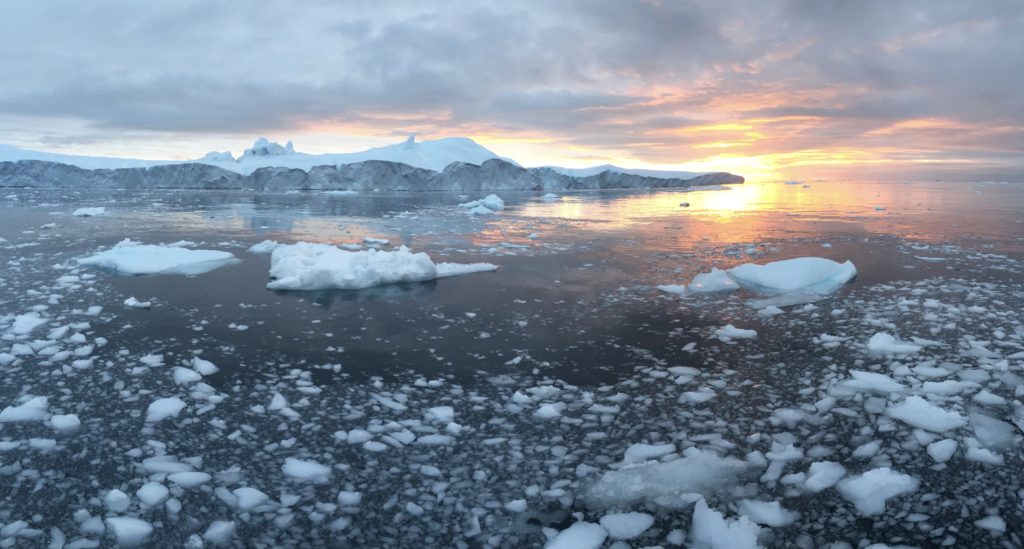 The sun sets over icebergs that broke off from Greenland’s largest and fastest retreating glacier — Jakobshavn. (Catherine Upin)

Greenland’s glaciers are melting faster and faster. To understand why, and what this might mean for the rest of the world, FRONTLINE and NOVA — two of PBS’s flagship series based at WGBH — teamed up with Emblematic Group, X-Rez Studio and Realtra to bring this story to life as never before. The team gained unique access to NASA scientists as they embarked on an ambitious mission to the heart of the Arctic to seek answers.

The cutting-edge virtual reality experience was produced with support from The Knight Foundation and created using technology to build a state-of-the-art immersive experience. Viewers stand at the foot of glaciers, board a NASA plane to view the disappearing icy landscape from above, and dive beneath the ocean’s surface to see what NASA’s new studies are revealing about how deep Greenland’s fjords go — and how quickly warm ocean water is melting them.

The process behind making Greenland Melting was as innovative as the science it explores. This stunning virtual reality experience was created using 360° footage, 2-D video, photos, videogrammetry and photo-realistic computer generated imagery.

Many of the environments were built by stitching together thousands of photos into fully dimensional scenes, and drew upon NASA-provided data. Additional computer-generated environments were combined with 360° footage shot on scene. The NASA scientists in this story were filmed using 8i technology and added to scenes as 3-D figures.

The Venice Film Festival, which kicks off Aug. 31, will mark the world premiere for Greenland Melting. The film will compete against 21 other virtual-reality films, which will be judged by a five-panel jury, and awarded prizes based on the best VR experience, best VR story and overall best VR.

This is FRONTLINE’s second walk-around journalistic VR experience. The First, After Solitary, won “Best VR” at this year’s South by Southwest festival.

In addition to the VR experience, the team also produced an immersive 360° film, Why is Greenland Melting? Watch it below: