After a four-month Twitter hiatus, Chinese dissident artist Ai Weiwei is back to tweeting and has posted the strongest anti-government comments he has made since he was released from government custody on June 22.

Ai described a meeting with Liu Zhenggang, an assistant in his art studio who had also been detained, and revealed that Liu had come close to death after suffering from a heart attack while in custody.

“I saw Liu Zhenggang today. It’s the first time that he talks about the detention. He held up his right hand and said, “Reporting to supervisor, I need to drink water.” Then, tears rolled off this tough man’s face…He had a heart attack when he was at the detention facilities and almost died.”*

Ai went on to tweet that Liu and other colleagues who had been imprisoned because of him had undergone “huge mental devastation and physical torture,” and urged his followers to stand up for other detained activists Wang Lihong and Ran Yunfei.

“If you don’t speak for Wang Lihong, nor for Ran Yunfei, not only you’re the sort that doesn’t speak up for fairness and justice, you have no love for yourself.”*

Ai was arrested on April 3rd for tax fraud — though the exact nature of his alleged crime was not revealed until later — and held in government custody for 80 days. At the time of his release, Ai told the media a condition of his bail was not being able to give interviews for a year.  Many took that to mean he was banned from using Twitter as well, but he told the Daily Telegraph today that he believed he was keeping with the requirements of his bail.

Ai first returned to Twitter Aug. 5 to share photos and tweet simple messages, like “What’s up?” to his 96,550 followers, but on Monday, his posts took on a more defiant tone, and may even put him at risk of further detention. But as seen in the above clip from our story Who’s Afraid of Ai Weiwei?, Ai is notorious for using Twitter to challenge the government and mobilize his supporters for social activism. 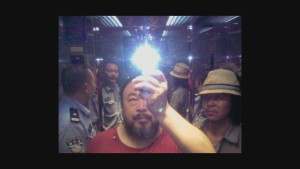