Chart of the Day: The SAC Advantage

At a typical hedge fund, the standard fee investors will pay is what’s known as 2-and-20. That means a 2 percent charge for all assets under management, and a 20 percent cut of any profits.

Steven Cohen’s SAC Capital Advisors is not a typical hedge fund. His fees have been reported as high as 3-and-50, meaning a 3 percent management fee and a whopping 50 percent take on profits. That didn’t scare clients away, though, and the following chart helps to explain why: 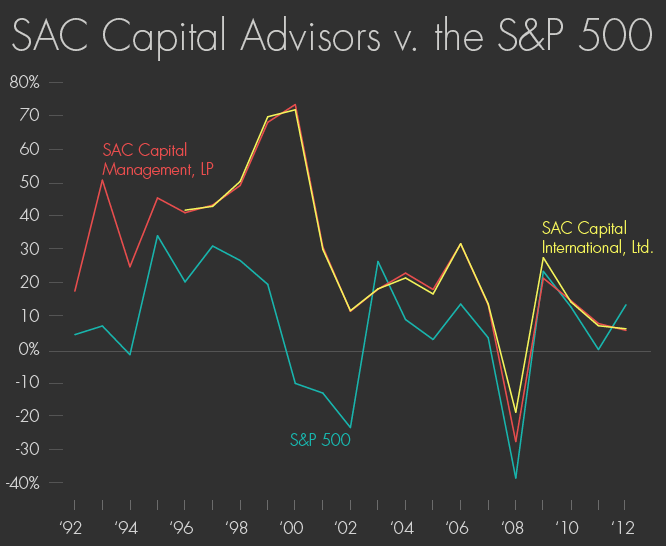 SAC’s two largest hedge funds, called SAC Capital Management, LP and SAC Capital International, Ltd., were opened in 1992 and 1996, respectively. In that time, the two funds combined for an average net return of close to 29 percent per year — not counting partial years — according to fund documents reviewed by FRONTLINE. In one year, gains reached as high as 73 percent. That compares to a return of less than 8 percent for the broader stock market over the same span.

“Cohen’s strategy was to get as much information as possible to have an edge, to be able to make money either on the upside or the down side depending on how a company’s earnings come out,” The New York Times Peter Lattman explains in tonight’s FRONTLINE investigation To Catch A Trader.

While the model helped deliver giant returns, it also brought heavy scrutiny and ultimately a wave of federal securities charges. In November, SAC pleaded guilty to insider trading violations, and as part of $1.8 billion deal with the government, agreed to close its business of managing money for outside investors.

Separately, six SAC employees have pleaded guilty to insider trading charges. A seventh, Michael Steinberg, was found guilty on five counts of securities fraud and conspiracy in December. The trial of an eighth employee, Mathew Martoma, began today. Cohen faces a civil charges for failing to properly supervise his employees, an allegation his attorneys call “unfounded.”

The government’s investigation into SAC is the focus of the FRONTLINE film To Catch a Trader, which premieres on-air and online starting at 10 pm EST.