President Obama is expected to nominate James Comey as the next director of the Federal Bureau of Investigation, turning to a former Bush administration official who left government after clashing with the White House over warrantless domestic wiretapping.

Comey, a Republican, was the No. 2 official at the Justice Department in 2004 when the administration’s wiretapping program came up for renewal. With John Ashcroft hospitalized at the time with acute pancreatitis, Comey was the acting attorney general. It was his job to reauthorize the controversial program, but with deep concerns about its legality, Comey refused to sign.

The standoff culminated in a dramatic confrontation between Comey and then White House counsel, Alberto Gonzales, and President Bush’s chief of staff, Andrew Card, at Ashcroft’s hospital bedside. Jack Goldsmith, who worked under Comey at the DOJ, recalled the episode to FRONTLINE in the below scene from the film Cheney’s Law:

Comey would later testify about the incident before Congress, telling lawmakers the exchange nearly led him to resign:

I was angry. I thought I had just witnessed an effort to take advantage of a very sick man who did not have the powers of the attorney general … I believed that I couldn’t stay if the administration was going to engage in conduct that the Department of Justice has said had no legal basis. I just simply couldn’t stay.

Read more about the unprecedented rebellion at the Justice Department here. 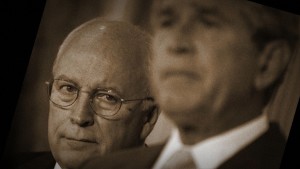