In Newly Released Photos, a Rare Glimpse of Cheney Unscripted

On Friday, Colette Neirouz Hanna opened an e-mail from the National Archives that she has been waiting to receive for more than a decade. Hanna, the coordinating producer for the FRONTLINE film team the Kirk Documentary Group, had just struck stock footage research gold — 2,664 photographs of former Vice President Richard Cheney and his staff were being released to FRONTLINE in response to her Freedom of Information Act request.

“We have wanted these photos for years to help us tell the story of probably the most powerful vice president in American history,” Hanna said.

For almost 15 years, FRONTLINE has been covering the role that Vice President Cheney played in the Bush administration’s response to the 9/11 attacks. And from the beginning, one of the biggest challenges was the intense secrecy that surrounded the Office of the Vice President.

“Time and again we ran into roadblocks,” said Hanna. “The White House would refuse to cooperate with our requests for photographs and even our attempts to film hallways in the Eisenhower Executive Office Building were denied.”

Without cooperation from the White House, the Kirk Documentary Group — whose coverage of the Bush administration for FRONTLINE includes the films Bush’s War, Cheney’s Law, The Dark Side, and most recently, the 2014 investigation Losing Iraq –– worked to find the images in other ways.

But Hanna knew there was a trove of other photographs out there, and when the National Archives took over the Bush administration’s records, she was one of the first to file a Freedom of Information Act (FOIA) request for the long-denied photographs.

“The release of this significant archive after years of trying points to the importance of in-depth journalism and our commitment to an important story like this,” says Raney Aronson-Rath, executive producer of FRONTLINE. “Through tenacity like this, we’re committed to shining new light on the big stories and people who continue to shape our times.”

The entire cache of photographs released yesterday can now be seen on the National Archives’ Flickr account. The collection includes a number of intimate photos of Cheney and President George W. Bush. Others include rare moments from inside the vice president’s office, while a third set of photographs detail the role of David Addington, Cheney’s top attorney and a senior advisor who worked with the vice president on national security issues.

“I am thrilled that these important photographs have finally been released to the public and I hope they will contribute to a fuller understanding of this crucial period in American history,” Hanna said.

In addition to the photographs, the archives also released a collection of administration documents in response to a separate FOIA filed by Christy Hoppe of The Dallas Morning News. As Peter Baker noted in The New York Times:

The papers are mainly memos, fact sheets and news articles sent to him in 2006, around the time of the hunting accident in which he shot a fellow hunter on a Texas ranch. But they offer a small glimpse into Mr. Cheney’s time in office … Many of the documents are banal. Aides sent Mr. Cheney a weather forecast for a coming weekend in Jackson, Wyo., where he kept a vacation home (“snow showers” every day). They passed along a birthday letter from the prime minister of Romania, thank you notes after meetings with a former prime minister of Sweden and a former chief executive of Hong Kong and a goodbye letter from a Canadian ambassador leaving Washington.

A selection from the collection of photographs is available below. The full collection can be viewed here.

Vice President Cheney Meets with David Addington and John Hannah, a former national security aide to the vice president, in his office.

Cheney and Addington aboard a plane at Little Rock Air Force Base. 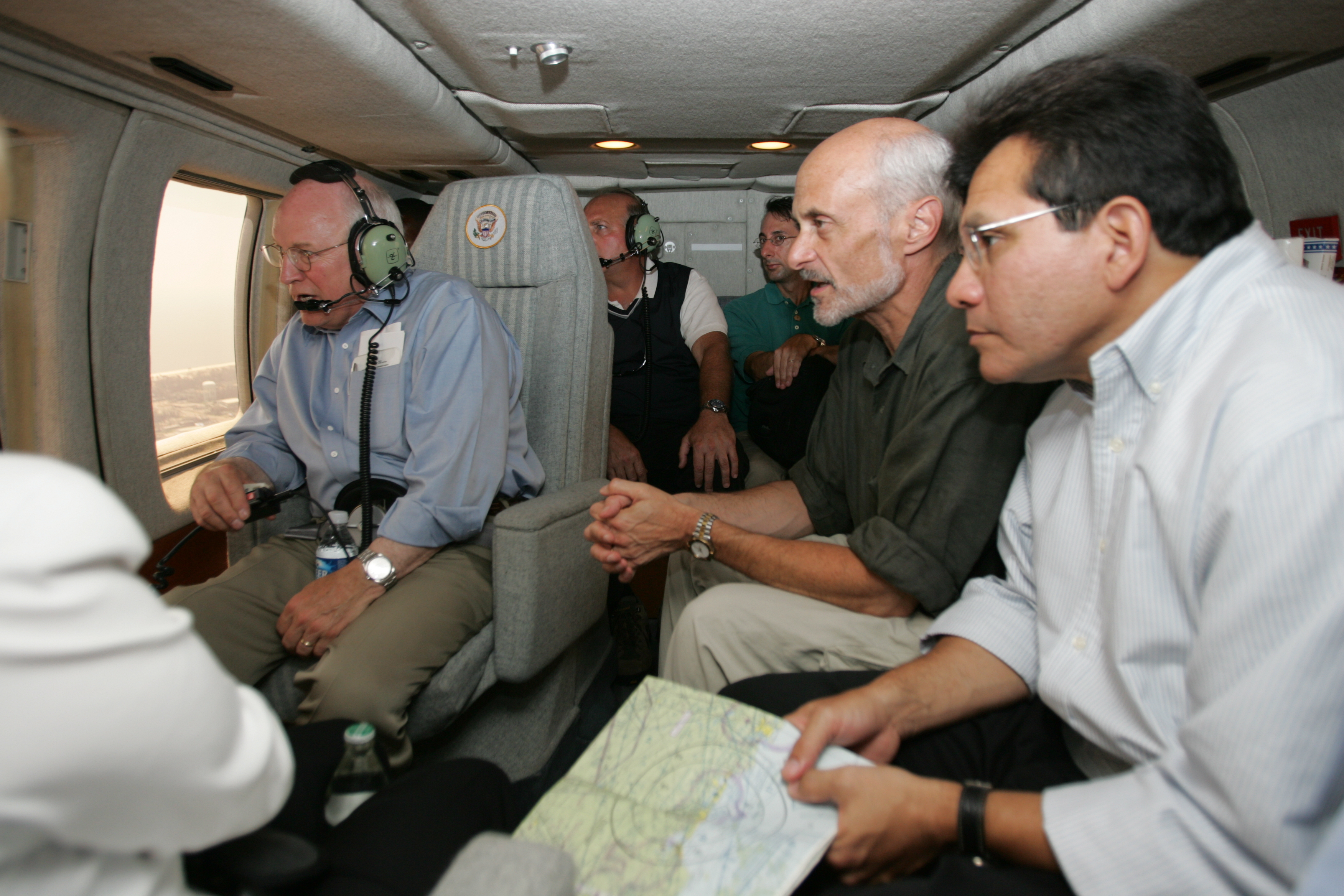 The vice president on a tour of damaged areas of Mississippi and Louisiana after Hurricane Katrina with former attorney general, Alberto Gonzales, and the former director of the Department of Homeland Security, Michael Chertoff. 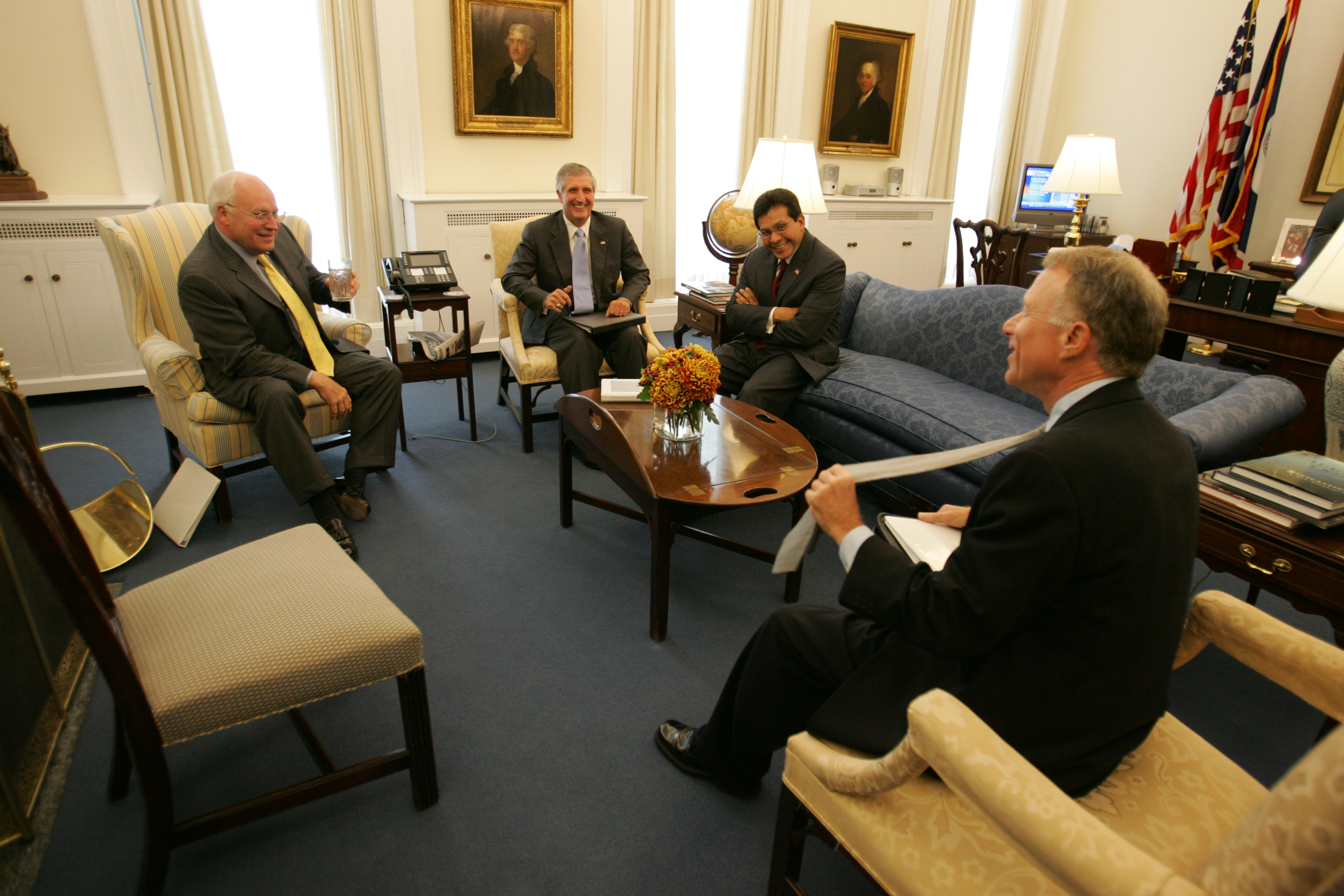 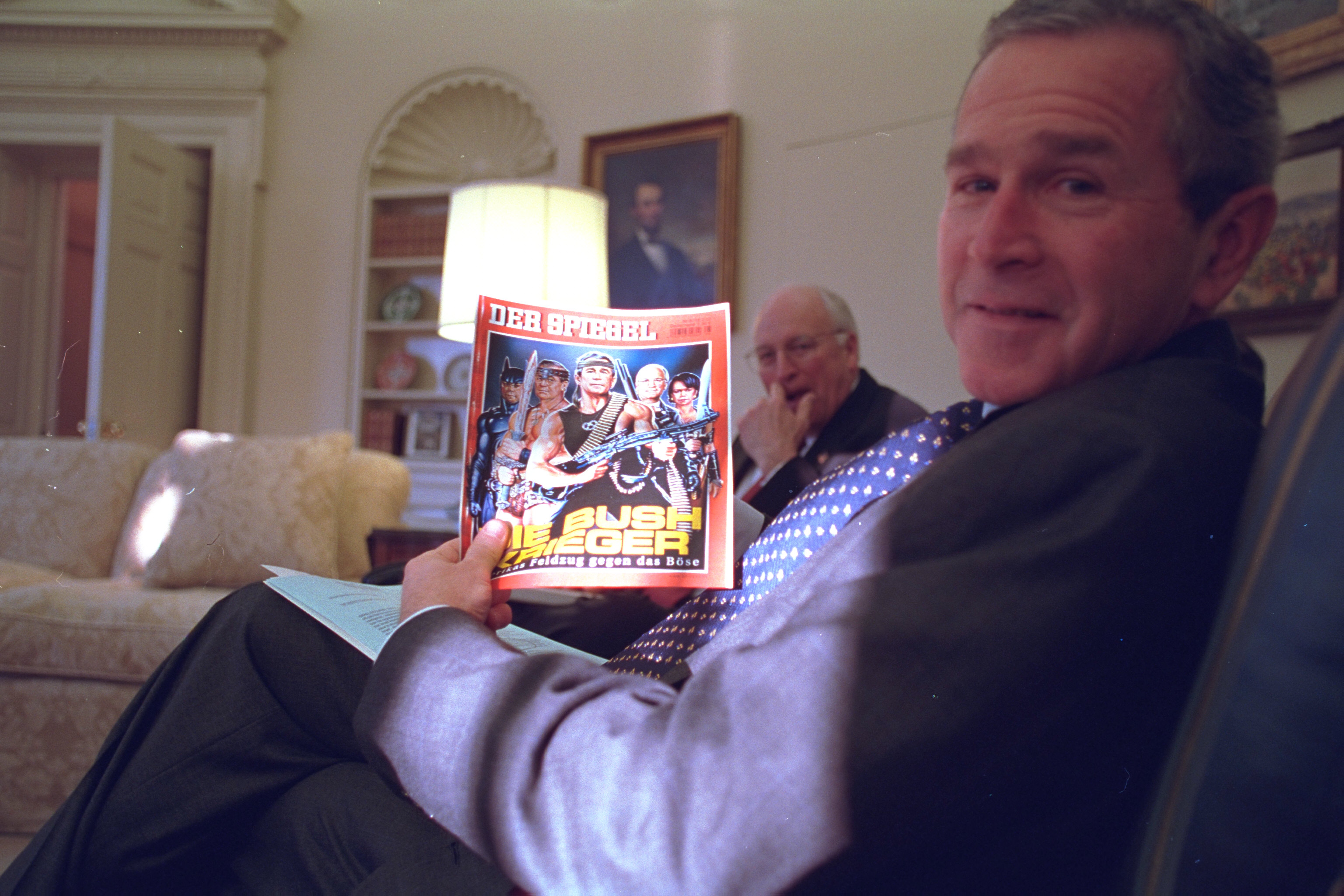 President George W. Bush shares a laugh with Cheney in the Oval Office.

Bush and Cheney Walk through the White House colonnade. 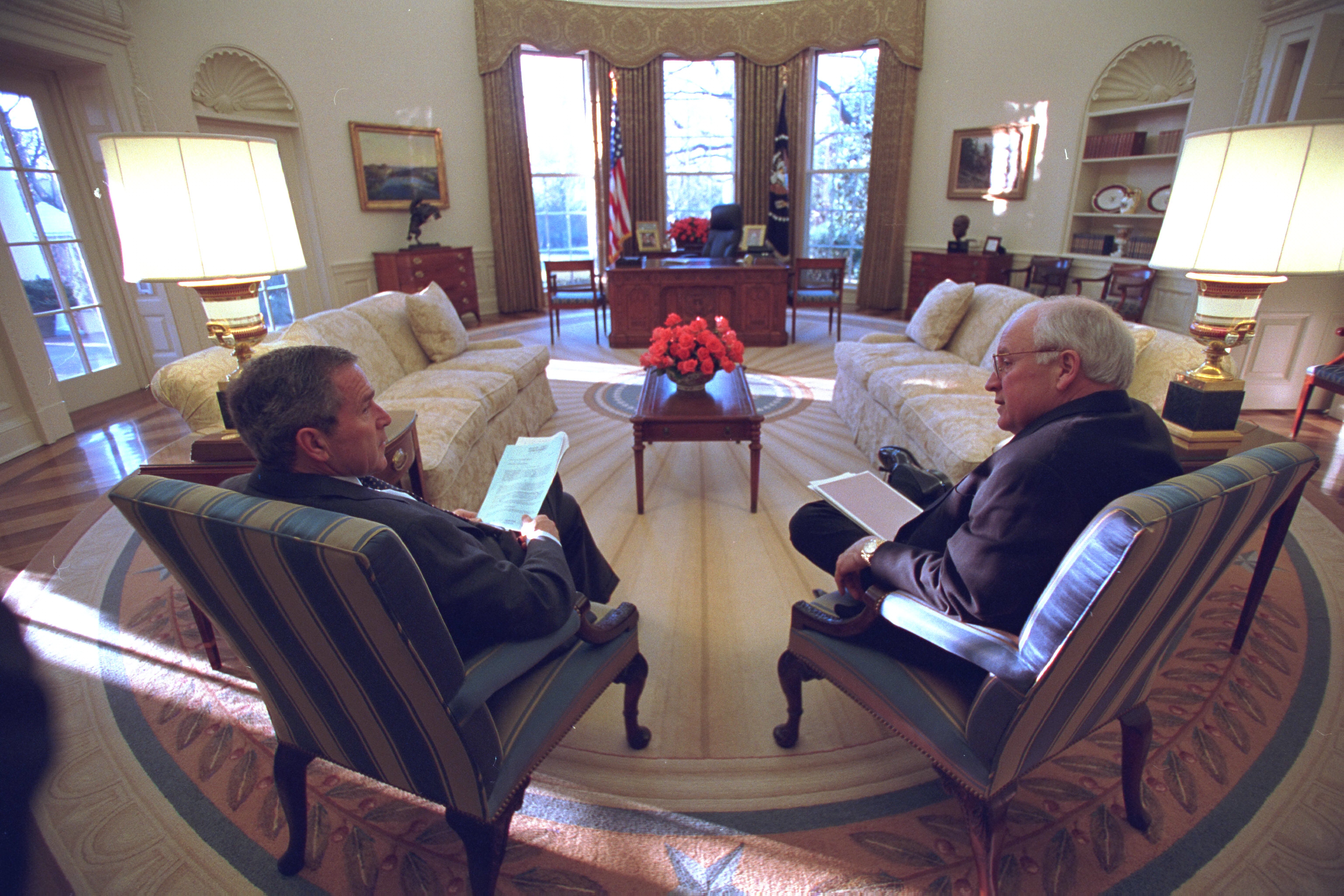 President Bush and Vice President Cheney in the Oval Office in March 2002. 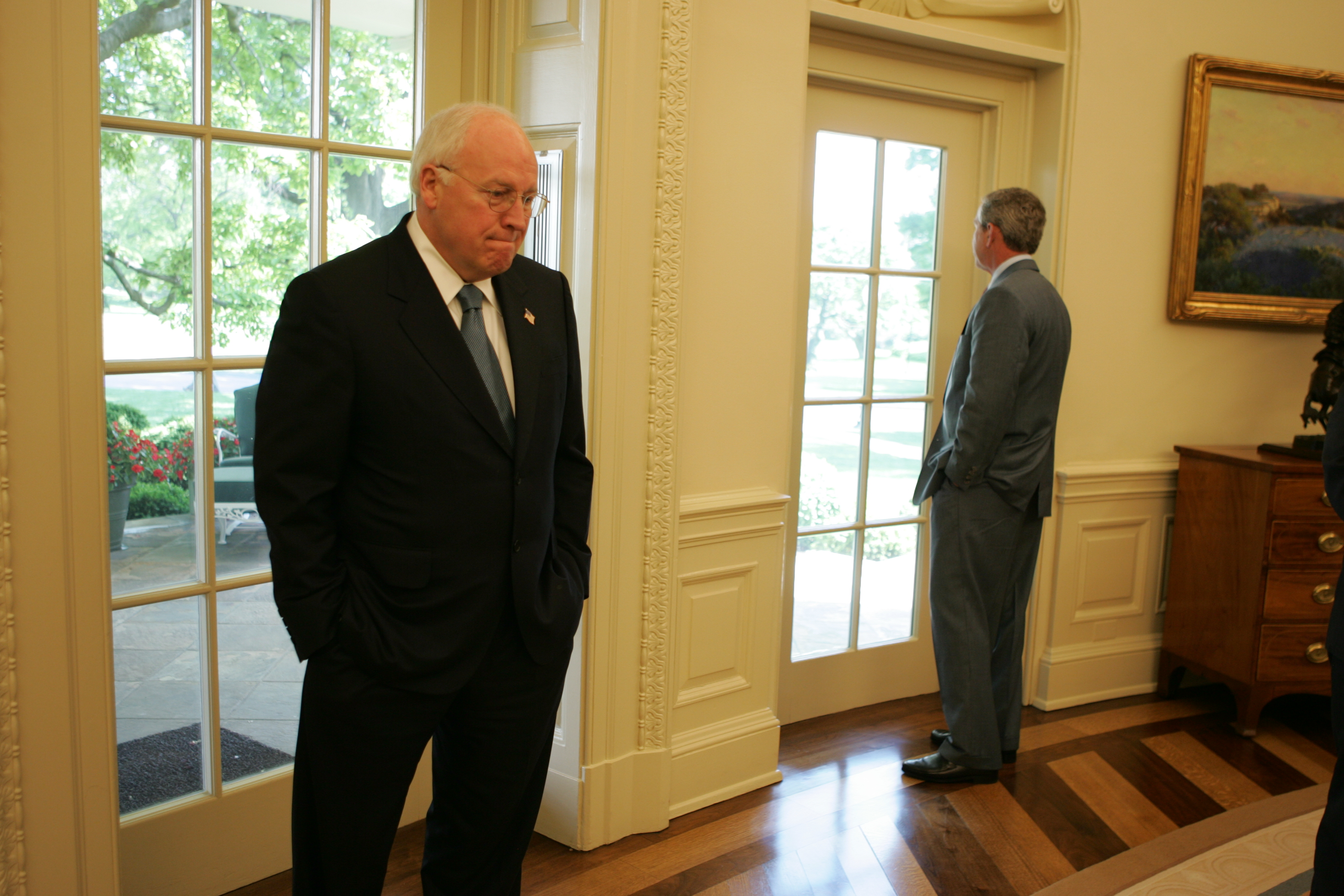 President Bush and Vice President Cheney in the Oval Office in May 2005. 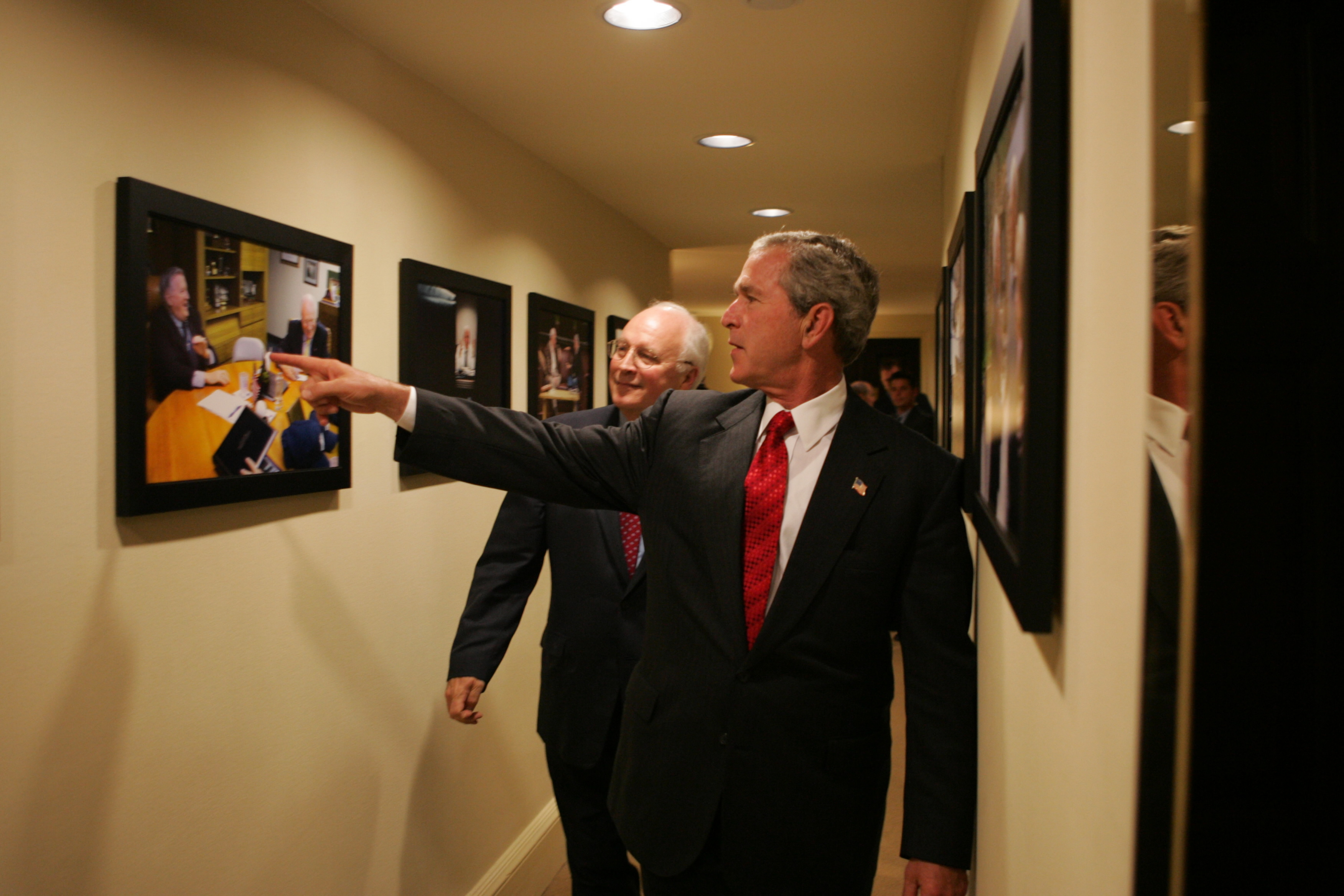 The president and vice president look at pictures together in the West Wing in July 2004.

Cheney and Bush have a discussion in the Diplomatic Reception Room in May 2007.

David Addington talks with Cheney during a Sydney Harbor cruise with Prime Minister John Howard of Australia in February 2007.

Cheney and Addington at the United States Naval Observatory in July 2006. 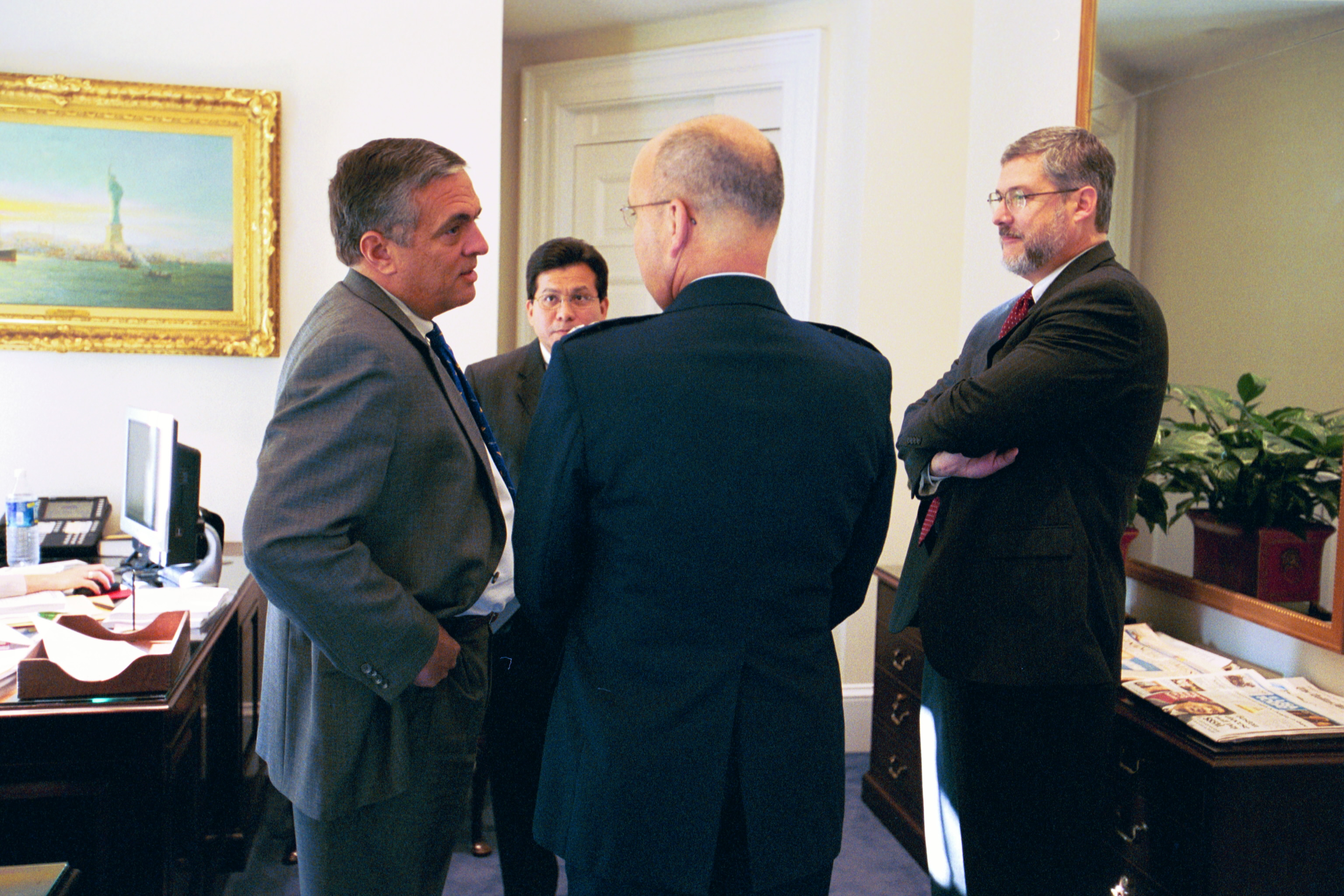 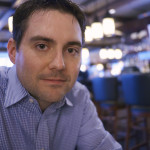