There was a time, not long ago, when Milwaukee factories made many of America’s most iconic products: leather saddles, tractors, motors and, of course, beer.

The photos below come from the Milwaukee Public Library, the city’s Historical Society and some of its local residents. They represent only a few of the large companies that once stood alongside Briggs and Stratton, Harley Davidson, Master Lock and Allen Bradley-Rockwell Automation as the companies that put Milwaukee on the map.

One can see traces of the city’s heavy industry in these images, and the people who made production possible: those who worked in the foundries and on the assembly lines, who were part of stronger unions, earned higher pay, and contributed to a thriving industrial center, which has mostly moved away. 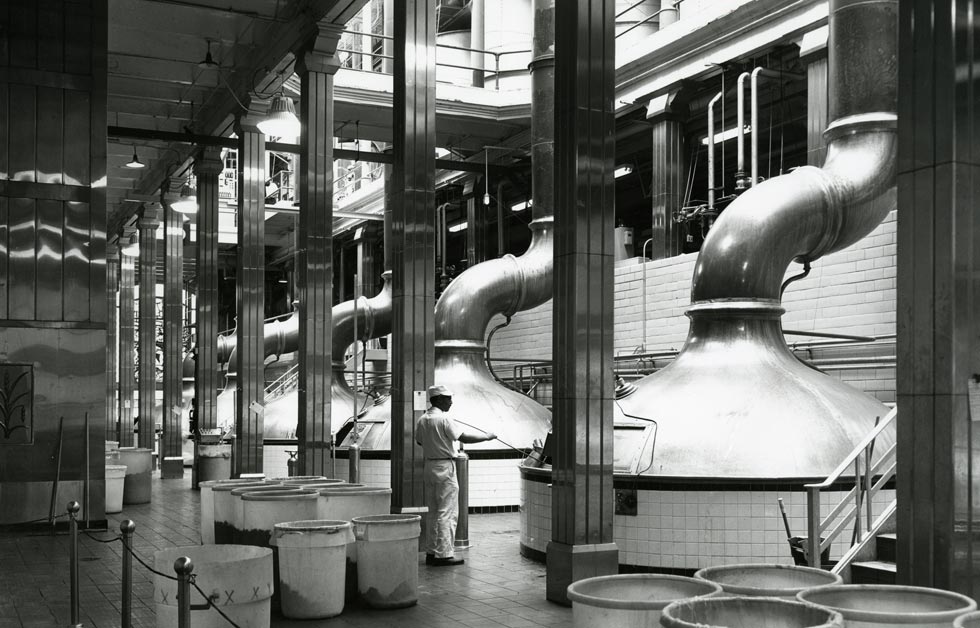 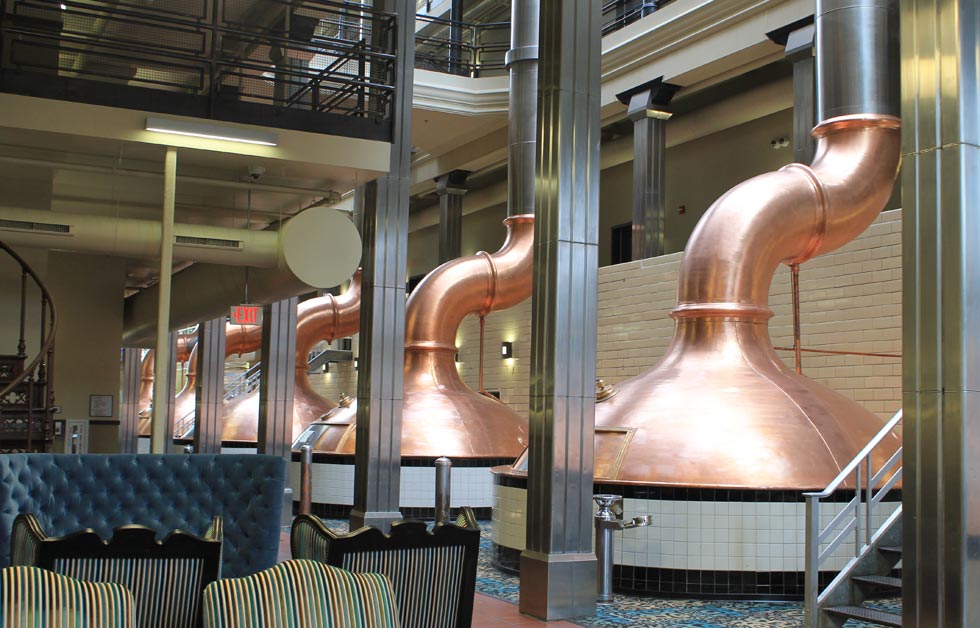 The Pabst brewery, whose oldest known parts date before 1882, ultimately closed its doors in 1996 after a fierce legal battle over cuts to health and death benefits for many of its former employees. The company has since sold the building, and it was reopened after a renovation as The Brewhouse Inn & Suites. (NOTE: Move the slider left and right to see the full before and after photos.)
Then: Lena Bertucci/Courtesy Milwaukee Public Library – Now: Courtesy of The Brewhouse Inn & Suites 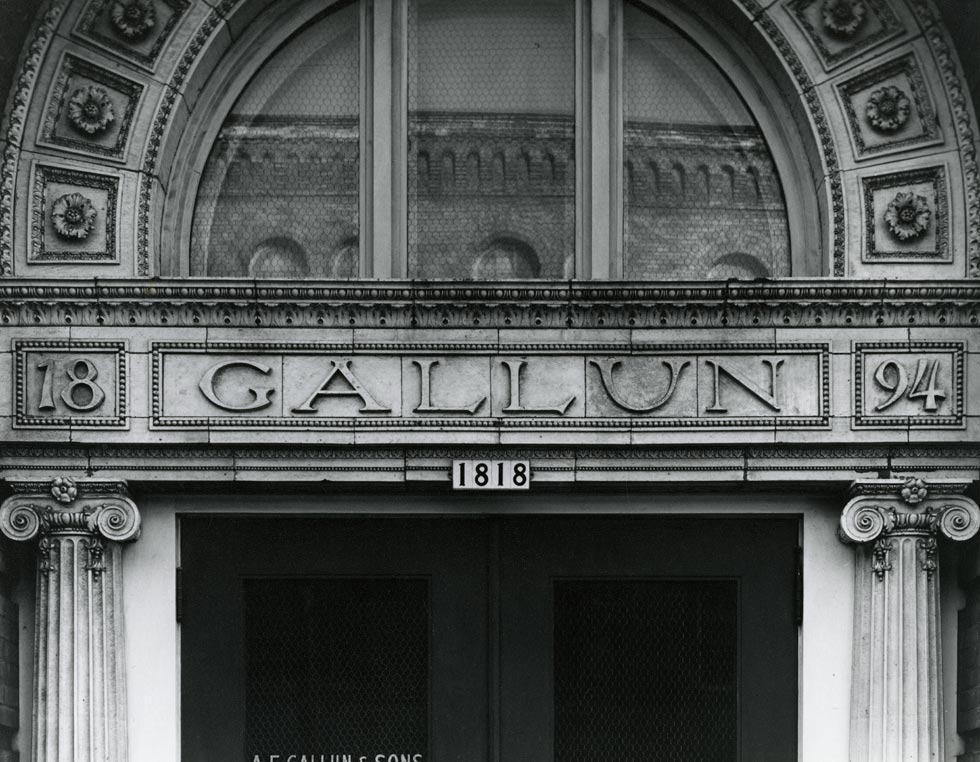 The former tannery of A. F. Gallun & Sons was one of the four largest leather-tanning operations in the United States around the beginning of the 20th century. It exists today as a luxury apartment complex.
Robert Drea/ Courtesy Milwaukee Public Library 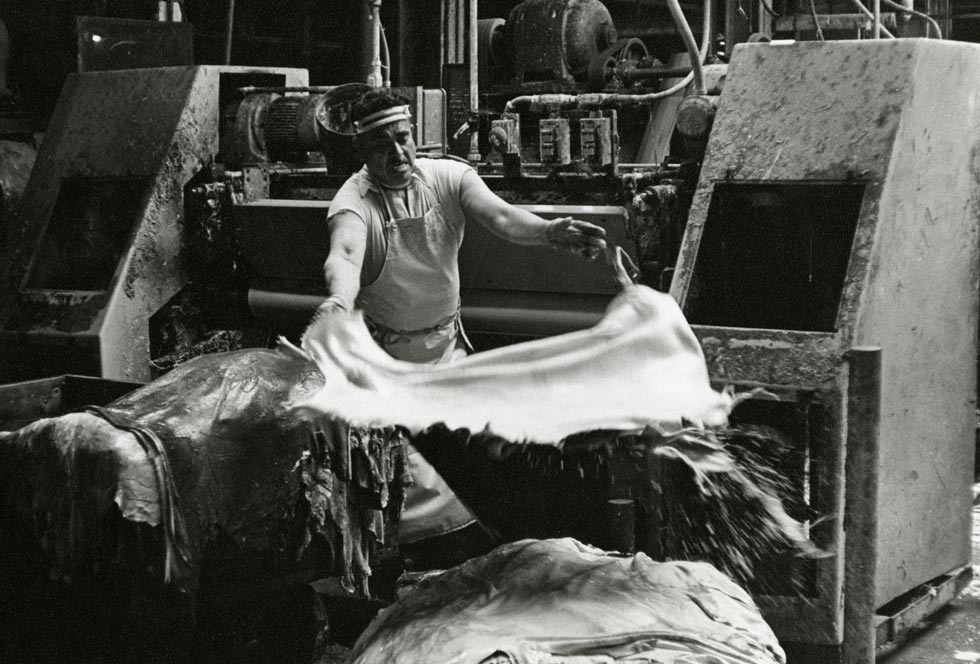 The first Gallun company, which made leather boots, saddles and harnesses for Civil War soldiers, was founded in 1858 by two German immigrants to Milwaukee: August Frederick Gallun and his partner Albert Gottlieb Trostel. Gallun restructured his company in 1884 and renamed it A. F. Gallun & Sons.
Robert Drea/ Courtesy Milwaukee Public Library 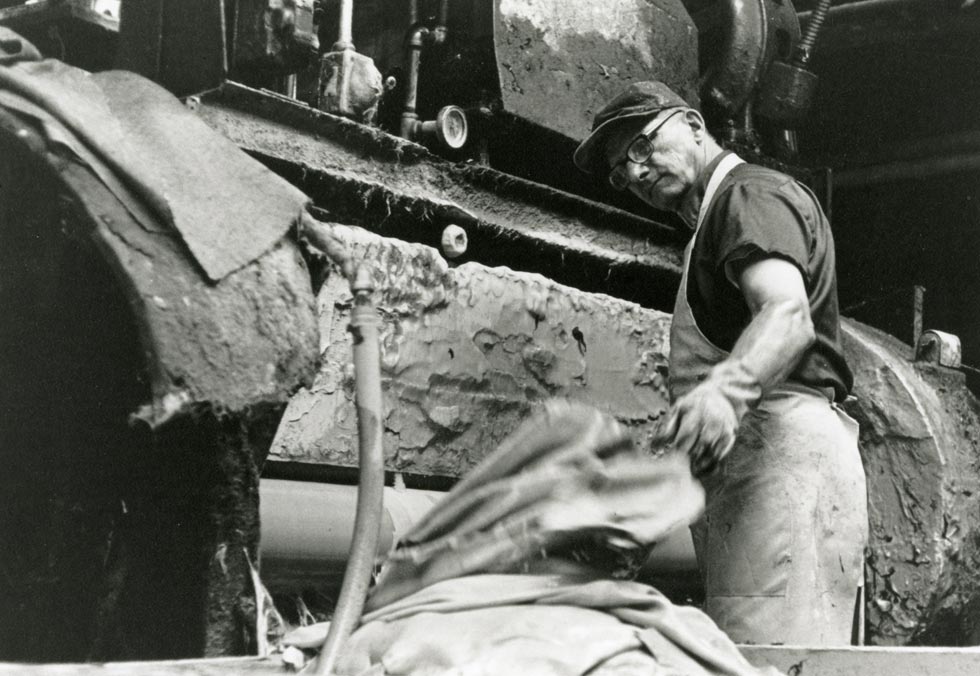 Tanning in Milwaukee benefited from the city’s once-thriving meatpacking industry. Hides arriving from slaughterhouses needed to be soaked in vats of salt and lye for several days to remove their hair. As author John Gurda writes, “working with heavy hides and corrosive liquids in constant stench was not for the faint of heart.”
Robert Drea/ Courtesy Milwaukee Public Library 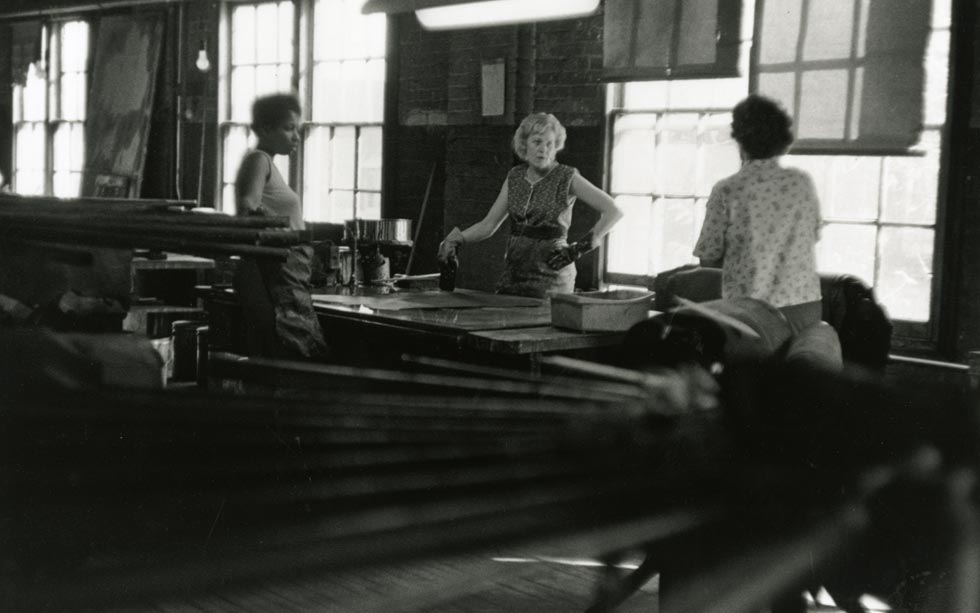 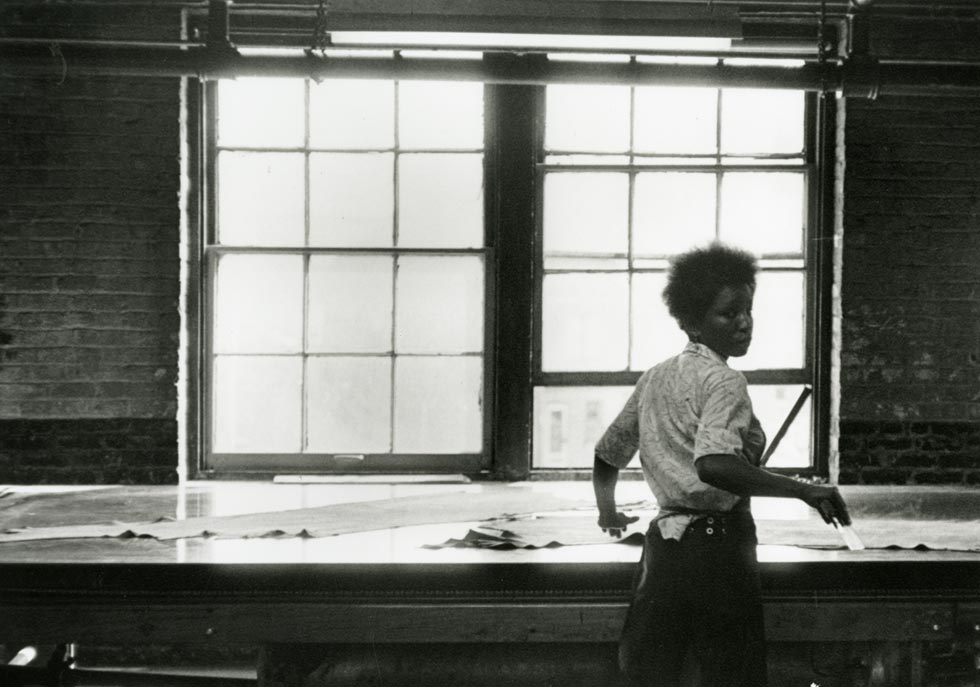 The company maintained tanning operations until it shut down in 1993, when it told the Milwaukee Journal Sentinel it could no longer compete with foreign competition.
Robert Drea/ Courtesy Milwaukee Public Library 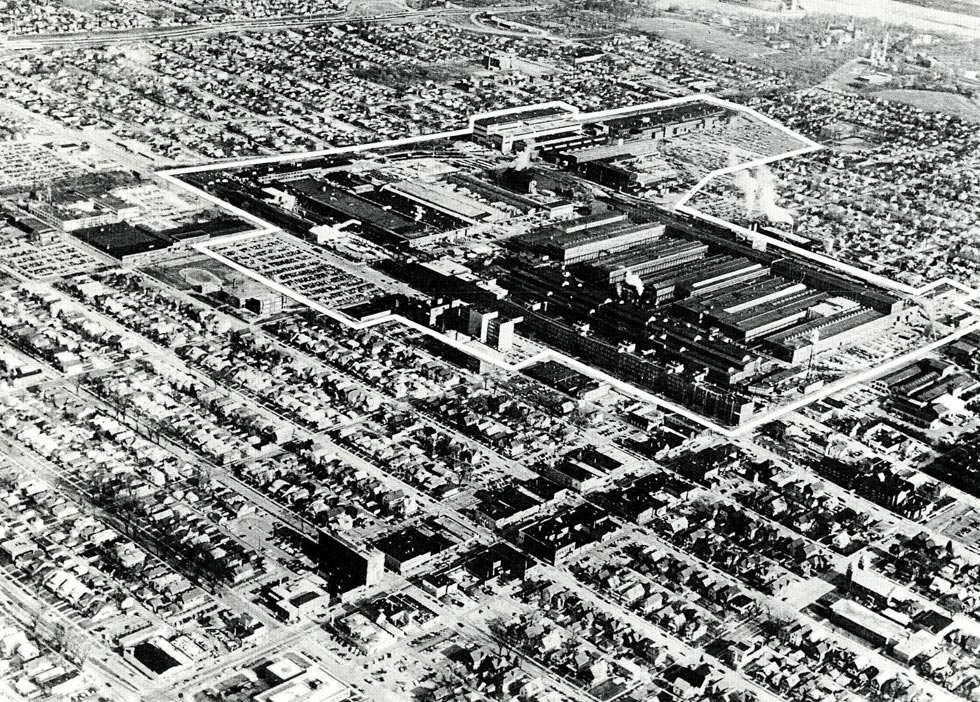 Founded at the turn of the last century, The Allis Chalmers Company was one of Wisconsin’s largest private employers during the years around World War II. Its main production facilities were located in the West Allis section of Milwaukee — a neighborhood that today remains named after the now-defunct company.
Courtesy Milwaukee Historical Society 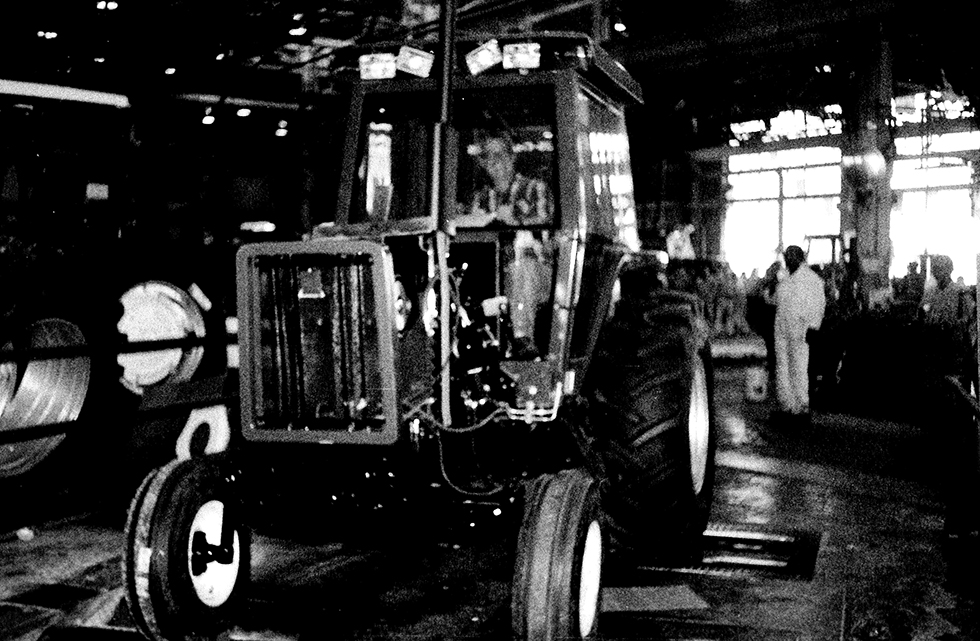 Allis Chalmers made a variety of heavy machinery, but it specialized in agricultural equipment. Pictured here is the last tractor the West Allis plant ever produced, on Dec. 28, 1985.
Courtesy Frank Shansky 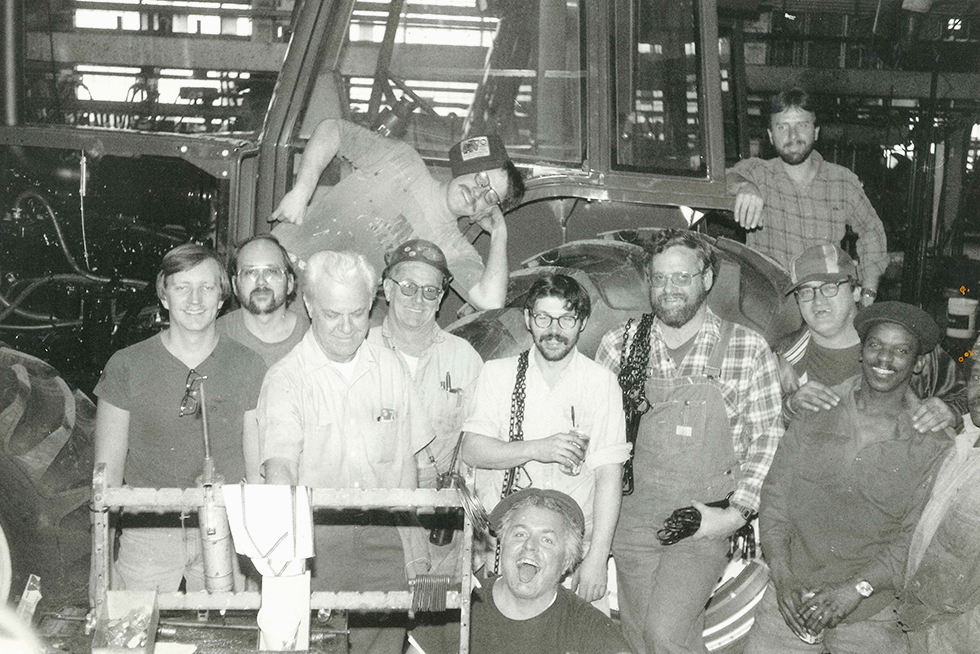 Frank Shansky, who assembled wheel weights, was the last person working in the Allis Chalmers tractor division. He took this picture of his coworkers on the plant’s last day of production. “It’s ironic they’re smiling,” he said, “but my recollection is we had all known this was coming and we were in a very camaraderie-type mood.”
Courtesy Frank Shansky 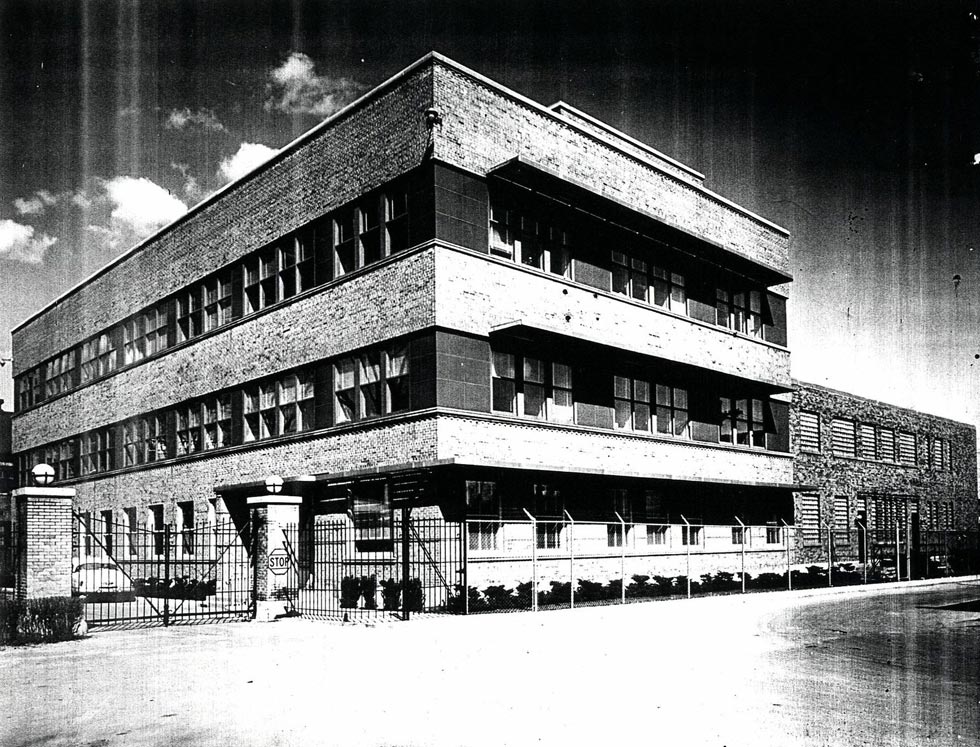 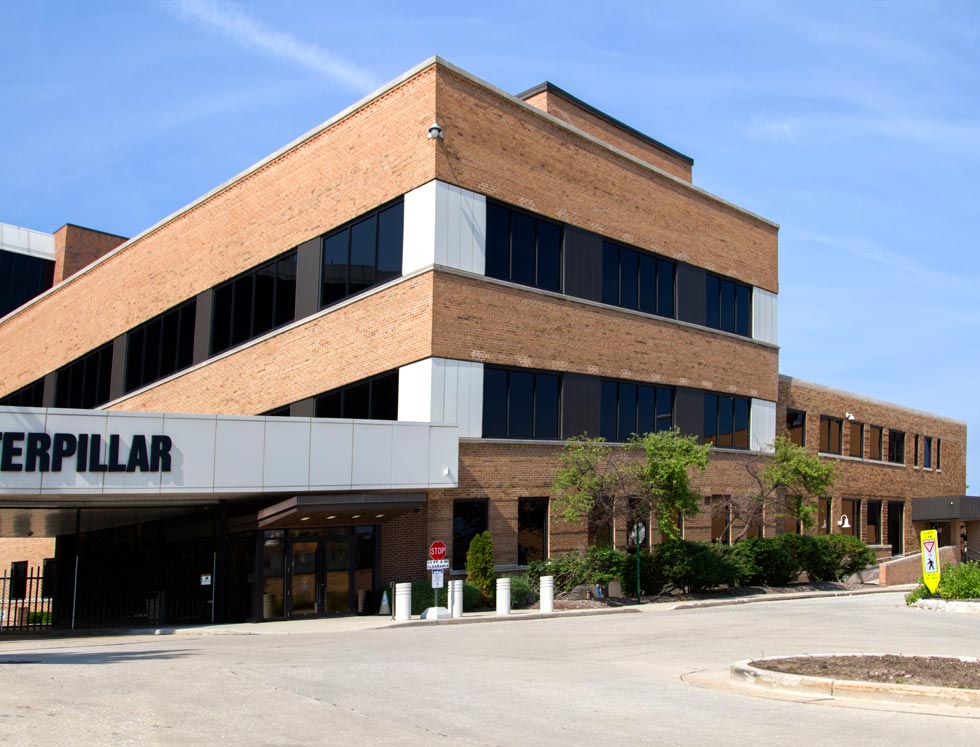 The Bucyrus Erie Company was one of Milwaukee’s largest manufacturers and a global leader in the production of heavy mining equipment. The company filed for bankruptcy in 1994 and was acquired by Caterpillar Inc. in 2011. The division remains profitable today, according to United Steelworkers union representative Ross Winklbauer, and one of its largest competitors is another Milwaukee company, Joy Global Inc. “They’re two companies that have grown while others have been hemorrhaging jobs,” Winklbauer said.
Then: Courtesy Milwaukee Historical Society – Now: Georgia Lloyd for FRONTLINE 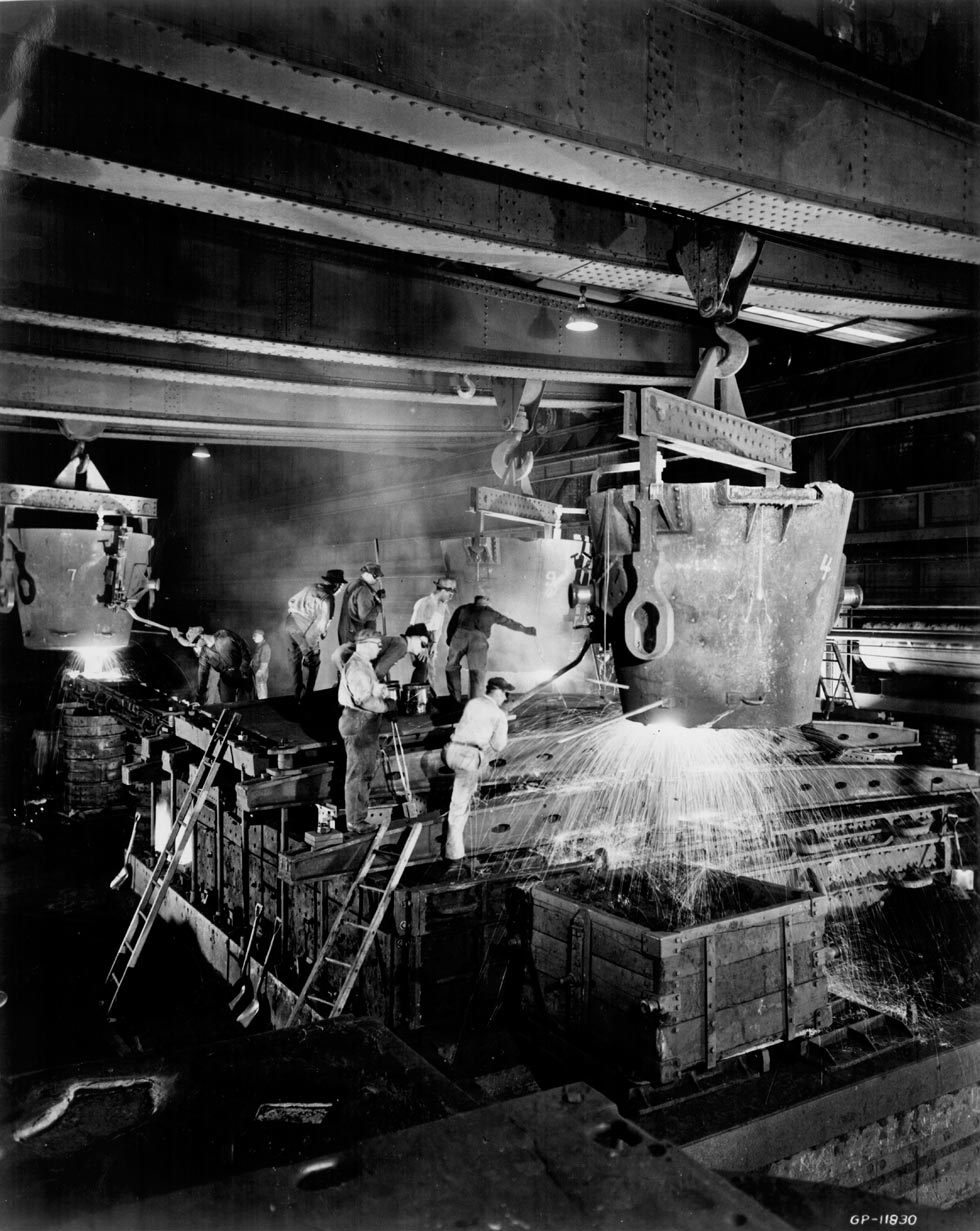 The Falk corporation was one of several Milwaukee factories that had its own foundry. Here, workers pour molten steel into a cast Falk used to make the wide variety of industrial gear drives the company manufactured. Falk was sold to Milwaukee-based Rexnord in 2005, and still exists today as one of its parent company’s brands. Though jobs have been cut in recent years, about 2,500 of Rexnord’s 7,300 employees are still based in and around Milwaukee. The foundry, on Canal St., remains operational.
Courtesy Milwaukee Public Library 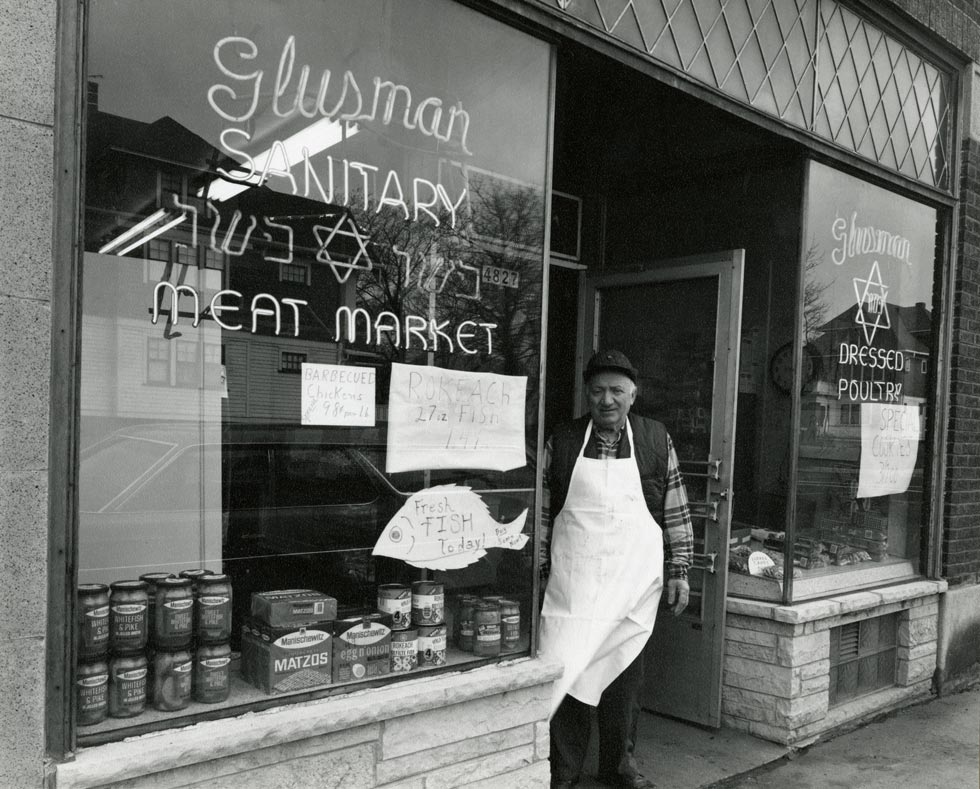 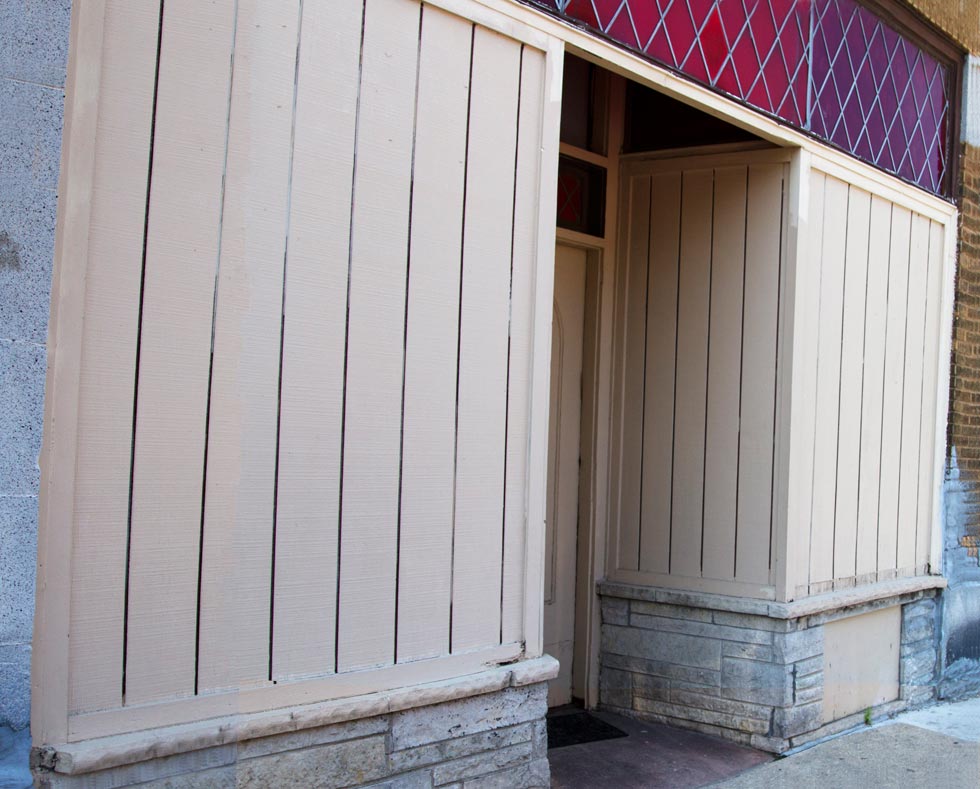 The residents of the working-class Sherman Park neighborhood are now primarily of African American descent, but it was once the heart of Jewish Milwaukee. In the photo to the left, Jack Glusman stands in front of his meat market in 1976. Today, the storefront stands boarded-up. (NOTE: Move the slider to see before and after photos.)
Then: Susan Armour/Courtesy Milwaukee Public Library – Now: Georgia Lloyd for FRONTLINE 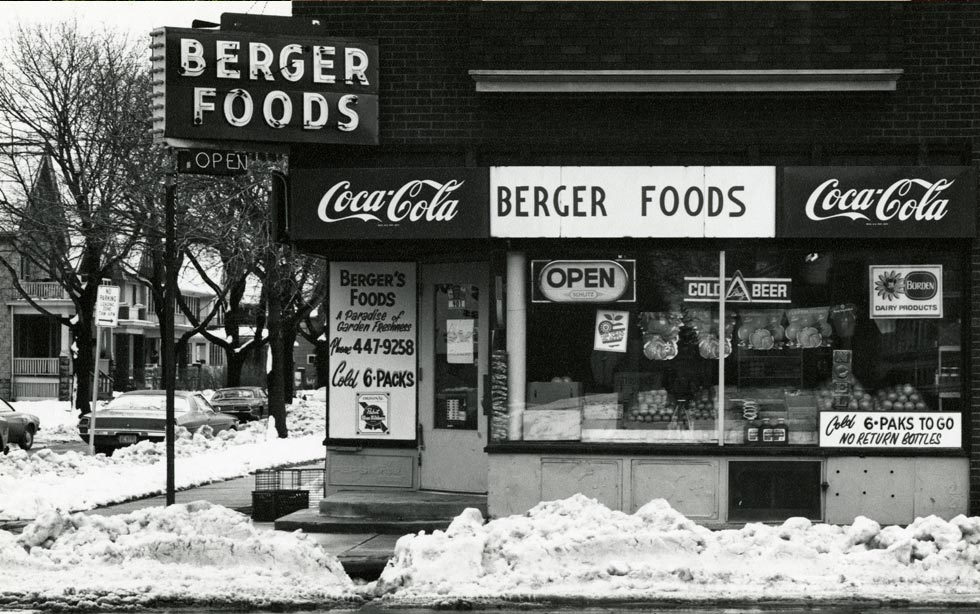 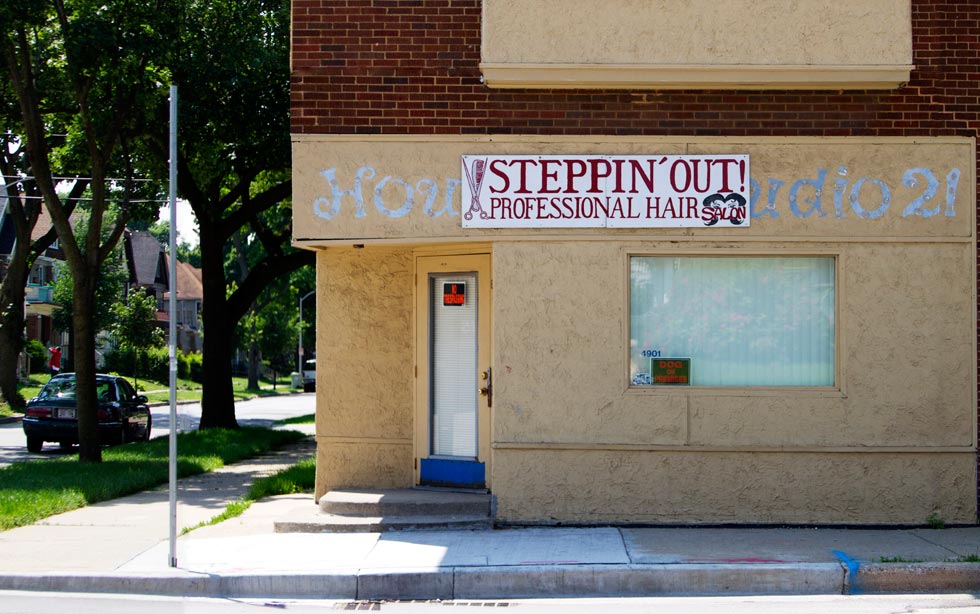 According to U.S. census data, the unemployment rate in the Sherman Park neighborhood was 2.8 percent in the 1970s. It climbed past 10 percent in the 2000s. (NOTE: Move the slider to see before and after photos.)
Then: Susan Armour/Courtesy Milwaukee Public Library – Now: Georgia Lloyd for FRONTLINE 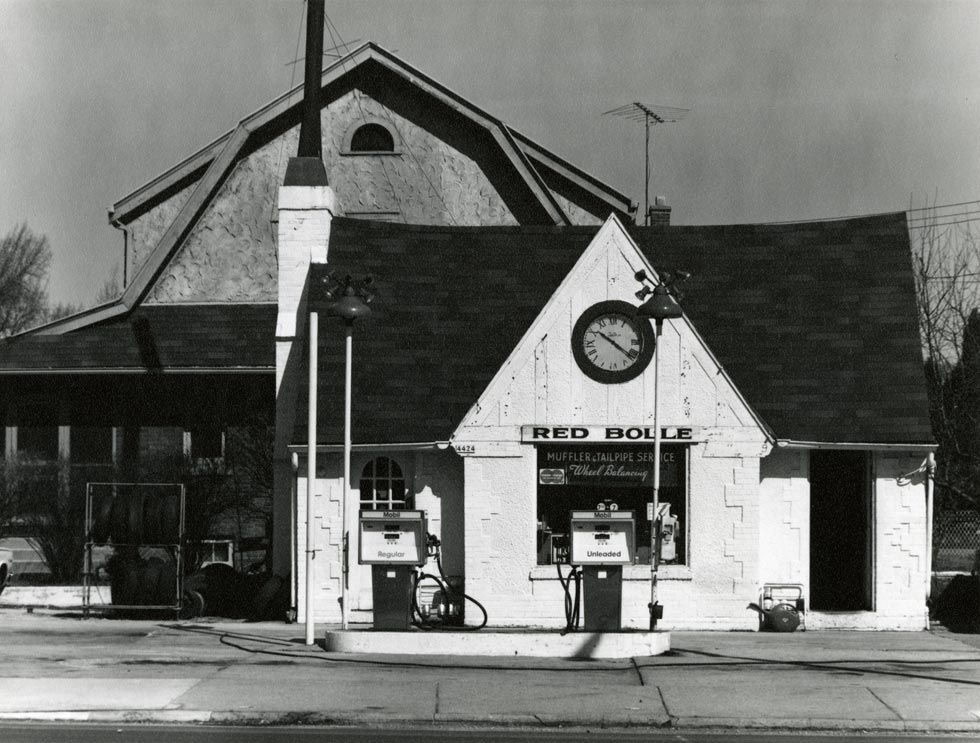 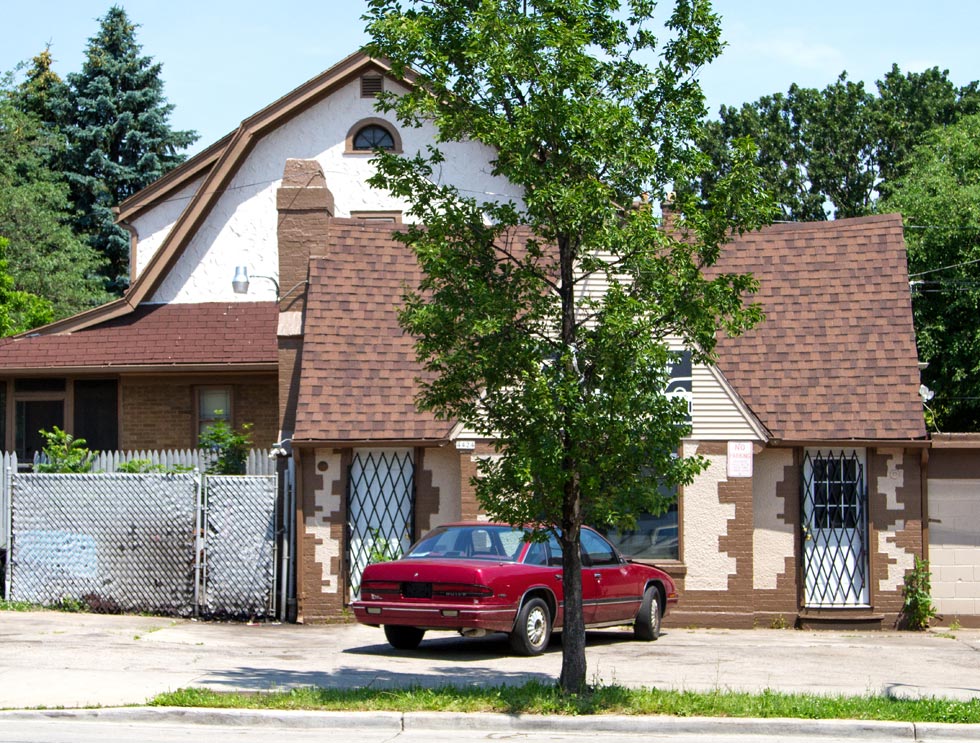 Gilbert “Red” Bolle started working at this service station in 1936 and purchased it from his boss, Forrest Minett, in 1940. Throughout the 42 years he worked there, his customers were a mix of wealthier and working-class locals. “Red,” nicknamed for his reddish complexion, remained a fixture in the strong middle-class community, but by the early 1970s, the neighborhood grew poorer. “I know he had some problems with break-ins”, remembers his son Glenn, who worked for his father in the late 1960s. “Red” Bolle retired in 1978, when, according to Bolle’s son, the station’s lease was returned to the Exxon Mobil Corporation. (NOTE: Move the slider to see before and after photos.)
Then: Susan Armour/Courtesy Milwaukee Public Library – Now: Georgia Lloyd for FRONTLINE 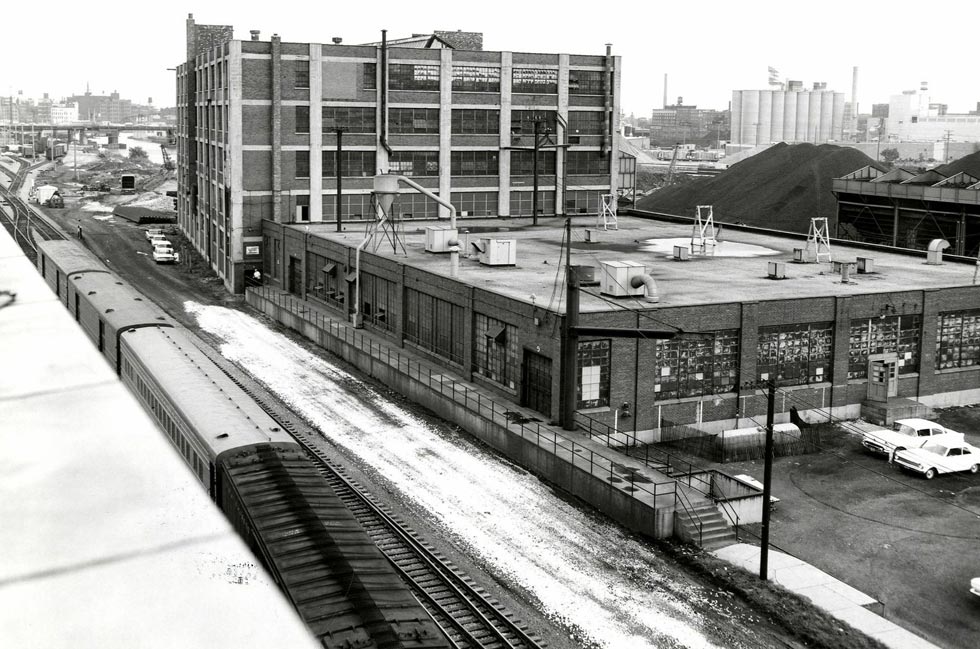 Cutler-Hammer was a major manufacturer of electrical components in Milwaukee; its operations were similar to another landmark Milwaukee corporation, The Allen Bradley Company. It made power distribution and control products, including advanced radar systems for military aircraft.
Courtesy Milwaukee Historical Society 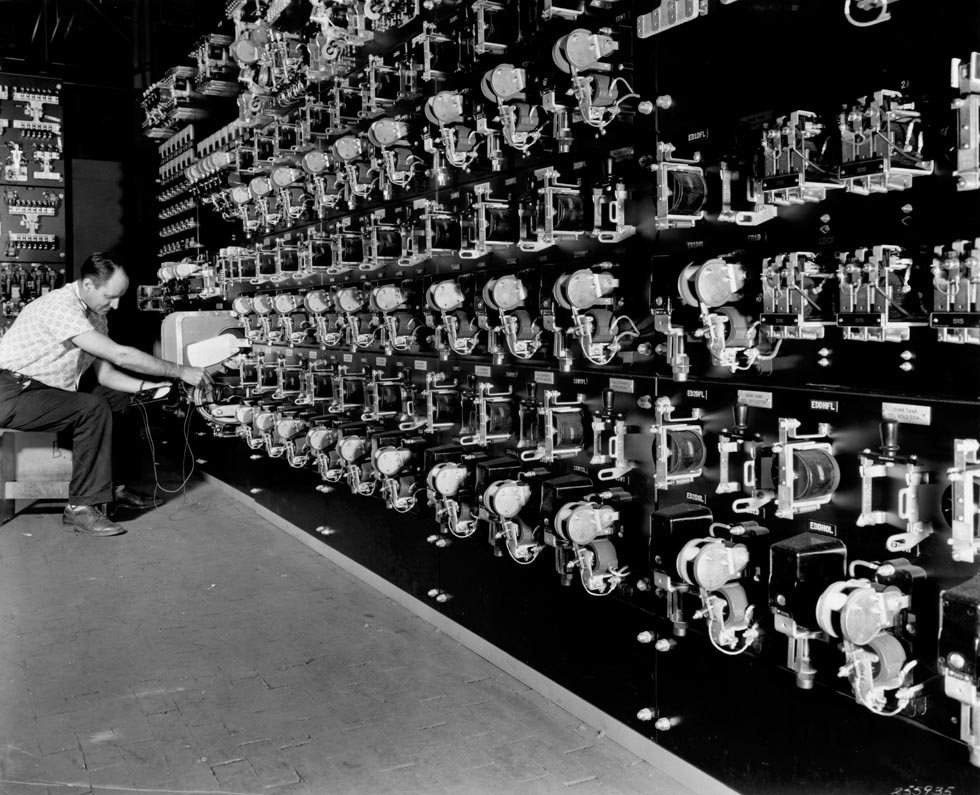 In 1978, Cutler-Hammer was sold to the Eaton Corp., and although Eaton closed most of its operations in the center of the city, it has moved some of its production to the Milwaukee suburbs.
Courtesy Milwaukee Public Library 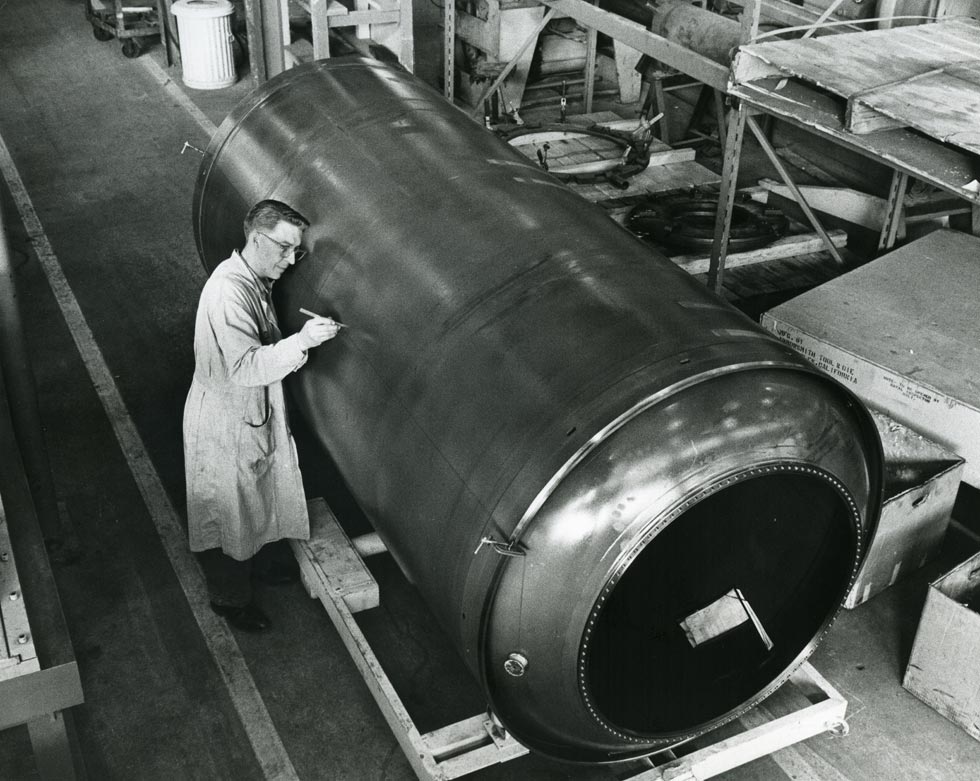 The A.O. Smith Corporation is still a major manufacturer of water tanks, but at its peak in the 1970s, it was also one of the world’s largest manufacturers of automotive frames, selling to Ford, Cadillac, Chrysler and General Motors, among others.
Courtesy Milwaukee Public Library 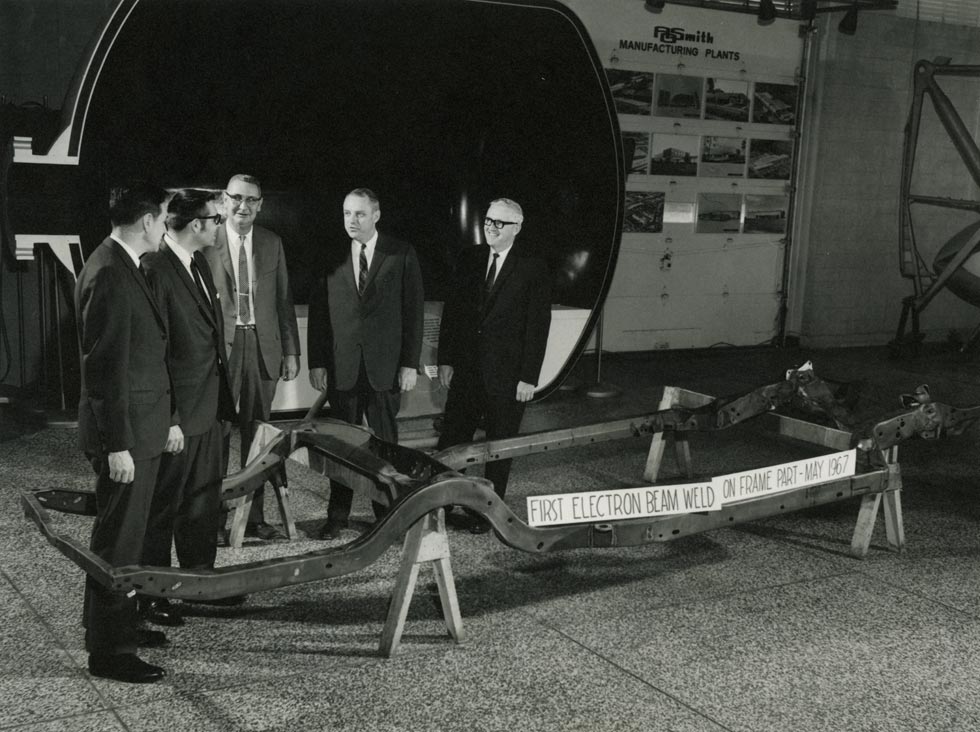 After some financial trouble, The A.O. Smith Corporation was sold to Tower Automotive in 1997, and the factory finally closed in 2006, taking more than 6,500 jobs with it, according to former employee Earl Ingram Jr. The surrounding town was deeply affected, Ingram said. “When the body dies the spirit leaves. that’s what it was like with A.O. Smith.”
Courtesy Milwaukee Public Library