Every year on the tenth day of the holy month of Muharram, the first on the Islamic lunar calendar, Shia Muslims show a distinctive face of Islam, one that sees spirituality in passion and rituals rather than in law and the familiar practices that punctuate Muslim lives. Open spaces and narrow alleys in cities, towns and villages take over from the mosques and seminaries as Shias individually and collectively make a show of their piety and their identity. No observer of this day, the festival of Ashura, will remain unaffected by the Shias’ display of fealty to their faith. None will fail to see the uniqueness of Shia Islam or the values and spirituality that define it.
– Vali Nasr, The Shia Revival

The holy day of Ashura marks the martyrdom of Hussain ibn Ali, the grandson of Prophet Mohammad, in a historic seventh century battle. The Battle of Karbala, as it’s known, cemented the schism between Sunni and Shia Muslims that arose from a succession dispute after the prophet’s death.

Every year around Ashura, the media is flooded with images of blood-soaked Shias self-flagellating. But Shias around the world — who make up between 10 to 13 percent of Muslims – observe the month in a myriad of ways. This year Ashura was observed on Tuesday. The photos below — some taken by worshipers themselves — illustrate how Shias commemorate the event that defines what they believe is a central narrative of their faith: justice in the face of oppression. 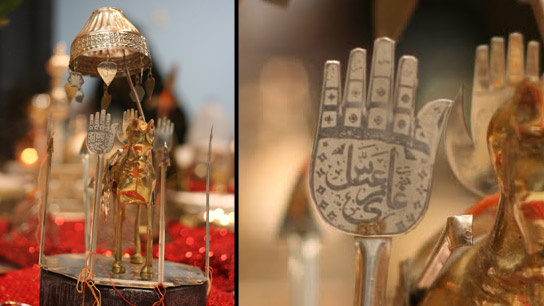 Atop many traditional Shia displays, you’ll find a decorative ornament shaped like a hand, known as an alam. Each finger represents one of the five figures Shias revere most: Prophet Mohammad; his daughter Fatima; his cousin Ali, who was also Fatima’s husband; and their two sons, Hasan and Hussein. Shias believe Ali was the rightful successor to the prophet and that only his descendants could assume the caliphate, a belief that would culminate in the Battle of Karbala. The alam above is from the Imam Ali Center in Springfield, Va. (Photo: Mohamed Sabur) 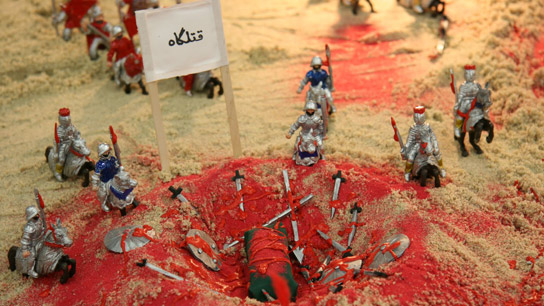 In 680 CE, the caliph Yazid deployed his army to crush a revolt led by Ali’s son Hussain. Yazid’s forces cut off access to the Euphrates River, forcing a battle that led to the massacre of Hussain and 72 of his companions. Above, a diorama on display at the Imam Ali Center in Springfield, Va., depicts where Hussain was killed. Shias will often create visual representations of Karbala to symbolize the revolutionary dissent central to their faith: Hussain stood up to Yazid’s rule at great cost to his family and community, but in doing so, Shias believe he saved the faith. (Photo: Mohamed Sabur) 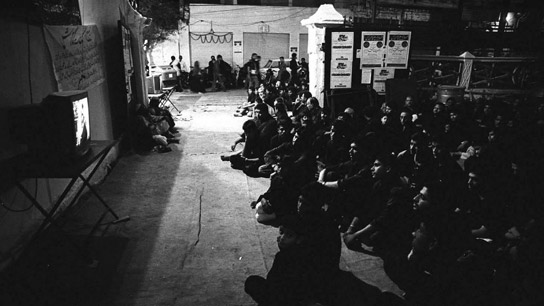 Throughout the month, Shias hold services with prayers, Quranic recitations and sermons known as majalis, which are delivered by an imam or learned spiritual leader. The first part of the majlis is usually on a general contemporary topic; the second recounts the historical events in Karbala on the corresponding day of the Islamic lunar calendar. In areas where a scholar is not present, worshipers might connect via satellite with other congregations to watch the sermon. Above, observers sit on a street in Hyderabad, India, and watch a local imam’s sermon on television. (Photo: Ryan Lobo) 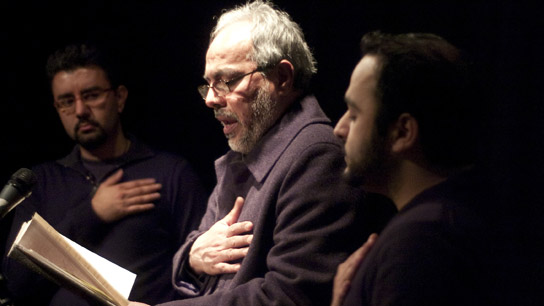 Shias often recite devotional poetry or hymns, sometimes called nohas, in remembrance of Karbala’s martyrs. Above, organizers of “Muharram in Manhattan” recite a noha while performing matam, a communal practice of beating one’s chest in an expression of grief. Naqi Haider, who is pictured on the right and helped organize the program in venues across Manhattan, said half of the attendees this year were Sunni. “In Muharram, we often end up going into our own isolated communities,” he said. “We wanted to make sure this was open to all Muslims, as well non-Muslims.” (Photo: Alexandra Ben Othman) 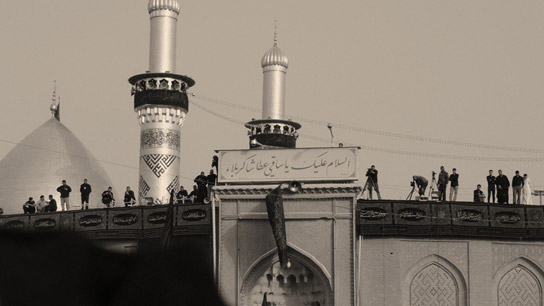 Pictured above is Abbas’ shrine in modern-day Karbala, where Shias believe Imam Hussain’s half-brother is buried. After being cut off from the Euphrates River, Imam Hussain and his followers were forced to fight the Ummayad army in the open. Abbas, a revered warrior, was killed as he went to fetch water for Hussain’s four-year-old daughter, Sakina. Atop the structure are photographers ready to capture a tradition on the day of Ashura in the sacred city, when Shias run from the shrine of Hussain to the shrine of Abbas. (Photo: Noor Ali) 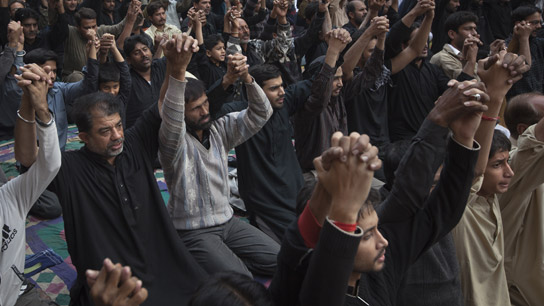 To Shias, the day of Ashura, which represents Hussain’s sacrifice and acceptance of martyrdom, is an opportunity to repent and atone for sins. Above, members of Lahore’s Shia community offer prayers on Dec. 5, 2011 ahead of a procession commemorating Hussain’s death. Lahore’s Old City is home to a large Shia community. (Photo: Rebecca Conway) 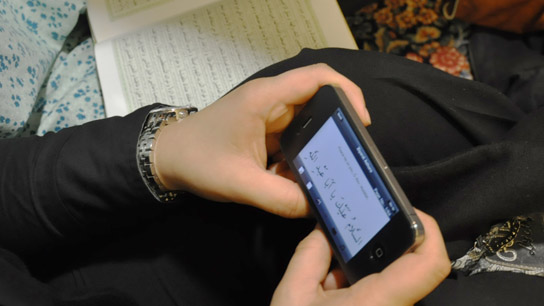 Ziyarat Ashura is a prayer Shias recite during the month of Muharram. Some prefer following it in prayer book, while others are more tech savvy, as pictured above at the Masjid Imam Ali in Queens, New York. iPhone apps for Muharram, like this one, are popular downloads during the month. (Photo: Maedeh Asad) 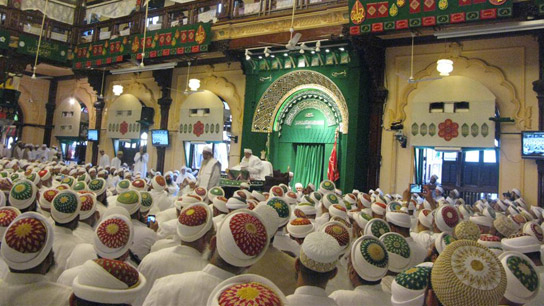 Dawoodi Bohras, an Ismaili Shia sect based in India, are pictured above observing the 5th of Muharram at the Saifee mosque in the Bhendi Bazaar in Mumbai. Adherents listen to sermons known as waaz, recite marathiyas, or lamentations, and perform matam, but its leadership forbids any sort of self-inflicted injury. Though Ithnashari Shias, also known as “Twelver” Shias for their belief in 12 imams, make up a majority of Shia Muslims, there are a number of subsects within Shiism, including Ismailis and Alawites. (Photo: Aziz Poonawala) 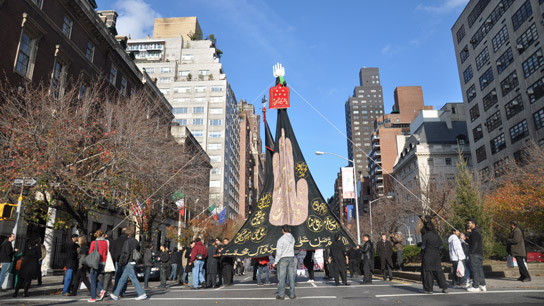 In this Ashura procession on New York’s Park Avenue on Sunday, worshippers carry a staff with a flag and an alam on top, representing the family of the prophet. Public processions are common, even in predominantly non-Muslim countries. Shias view these public rituals as ways of spreading Muharram’s messages of social justice and standing up against tyranny. (Photo: Maedeh Asad) 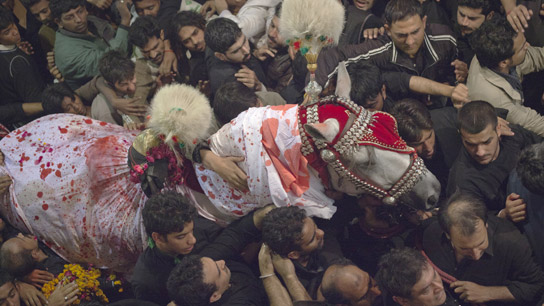 Processions often feature a horse known as Zuljanah, symbolic of the horse Hussain rode during the Battle of Karbala. Narrative retellings of the battle often include attestations to the bravery and loyalty of Hussain’s horse, who protected him throughout the battle. In many parts of the world, observers will bring an actual horse along in processions, as captured above on the day of Ashura this year in the Old City area of Lahore, Pakistan. (Photo: Rebecca Conway) 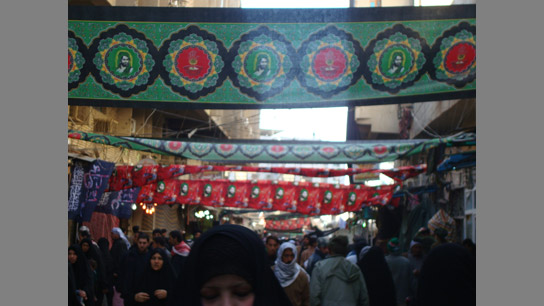 Here a woman walks through Karbala’s streets, which are decked out for Muharram with flags, banners and ornaments. Since the fall of Saddam Hussein’s Baathist regime, which prohibited most Shia processions, Iraq’s Shias have been able to commemorate Muharram more freely. Today, Shias from across the world travel to Karbala to visit Hussain’s shrine and other holy sites. But Shias are frequently under the threat of sectarian attack during the month. In March 2004, coordinated bombings in Karbala and a Shia mosque in Baghdad killed more than 170 people on Ashura. (Photo: Noor Ali) 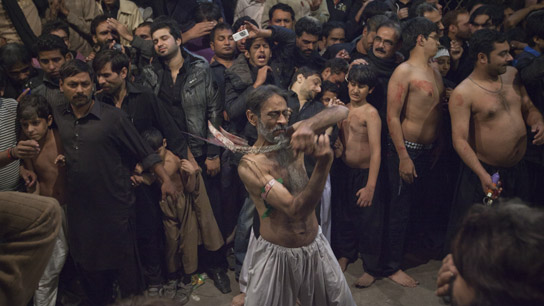 In an expression of grief over Imam Hussain’s martyrdom, some Shias self-flagellate with blades, sometimes to the point that they draw blood. Though most Shia religious authorities forbid the practice — it is outlawed in Iran, for example — it regularly occurs in Ashura processions in some parts of the world, as pictured above in Lahore, Pakistan. The controversial practice has generated criticism for being unsanitary — mourners will sometimes wash knives in public buckets — while some Shia theologians argue that to physically hurt the body Allah gave you itself is a sin. (Photo: Rebecca Conway) 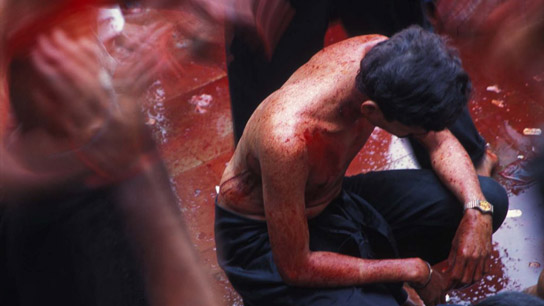 Drawing blood during Muharram continues to be a source of debate among Shias; while the practice is not the most prevalent of Shia Muharram rituals, images like this one from Hyderabad, India, dominate media coverage. (Photo: Ryan Lobo) 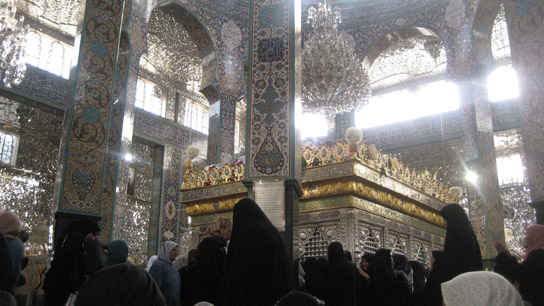 Above, mourners visit what some Shias believe is the shrine of Zaineb, the sister of Hussain, in Damascus, Syria. One of a handful who survived the battle of Karbala, Zaineb accompanied her brother’s decapitated head to Yazid’s court in Damascus, where she defended the life of Hussain’s son Ali, the only surviving male member of the family. Ali would succeed his father as the next Shia imam. Thus, Zaineb ensured the continuity of Shiism. “That Hussain’s heroism became legendary and gave form to Shiism is very much her doing,” writes Nasr. “Shiism owes its existence to a woman.” (Photo: Azmat Khan) 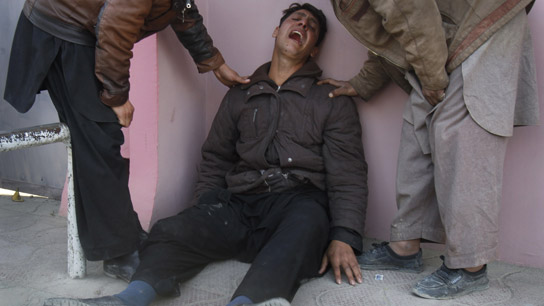 The distinctive rituals Shias observe during Muharram frequently makes them the target of violent sectarian extremists. Governments with sizable Shia populations often put security on high alert during the month, particularly on days eight, nine and 10, amid threats of attacks. On Tuesday, attackers killed at least 63 worshippers in three coordinated bombings in Kabul, Kandahar and Mazar-i-Sharif, a rare attack on Afghanistan’s Shias. Above, an Afghan man is comforted by relatives outside of a Kabul hospital after the attacks. The Pakistani Sunni extremist group Lashkar-e-Jhangvi claimed responsibility for the attacks. (Photo: AP/Ahmad Jamshid)

Other Articles From Religion and Beliefs