In this Friday, Aug. 17, 2012 file photo, a Syrian man grieves over the bodies of four members of his family, who were killed when an airstrike hit their house, as they lie on the side of the street outside a field hospital in Aleppo, Syria. Its forces stretched thin on multiple fronts, President Bashar Assad's regime has significantly increased its use of air power against Syrian rebels in recent weeks, causing mounting civilian casualties. The shift is providing useful clues about the capability of the air force as Western powers consider the option of enforcing a no-fly zone over the northern part of the country.(AP Photo/ Khalil Hamra, File) (AP Photo/ Khalil Hamra, File)

August was the deadliest month since the Syrian rebellion began a year-and a-half ago — and more deadly for civilians than the bloodiest months in the Iraq and Afghanistan wars, as well as the recent uprisings in Tunisia, Egypt, Libya, Yemen and Bahrain. 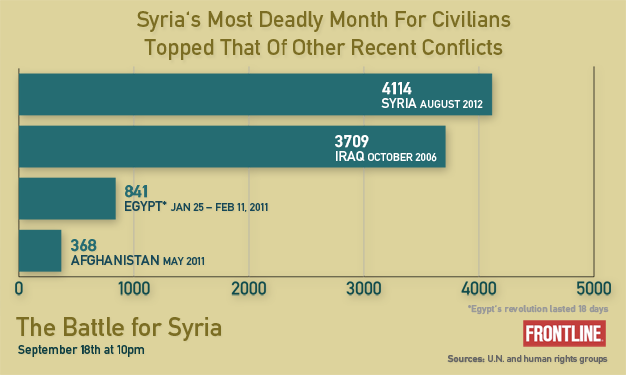 More than 5,400 people, a significant majority of them civilians, were killed during the month, according to the Syrian Observatory for Human Rights, a widely cited London-based opposition group that tracks the violence*. The group puts the total number of both civilian and military deaths since the uprising began at 26,000, which suggests that about 20 percent of recorded deaths occurred in August alone, when the regime began unleashing more air power to crush the revolt and fighting reached the country’s largest city and its commercial capital, Aleppo.

But these numbers, as stark as they are, cannot fully illustrate the escalating war playing out on the ground. In The Battle for Syria, airing on Tuesday, FRONTLINE journeys into the heart of the rebellion in Aleppo for an up-close, unflinching look at how the insurgency is operating, why the rebels are fighting and where the war is leading.

The conflict has spilled into the region, with an estimated 200,000 refugees fleeing to neighboring states, including Turkey, Lebanon, Jordan and Iraq. U.N.-Arab League envoy Lakhdar Brahimi is on his first mission to Syria today, where he will be meeting with the embattled president.

*A Note About the Numbers
Determining an accurate death count amidst conflict is fraught with challenges. There are several groups tracking the violence in Syria, including the Center for the Documentation of Violations in Syria and the Local Coordination Committees, which put civilian deaths in August in a similar range as the Syrian Observatory’s estimate. FRONTLINE’s sources for the above graphic are: Syria, The Syrian Observatory for Human Rights; Iraq, The United Nations; Egypt, The Arab Network for Human Rights Information; and Afghanistan, The United Nations Mission in Afghanistan.